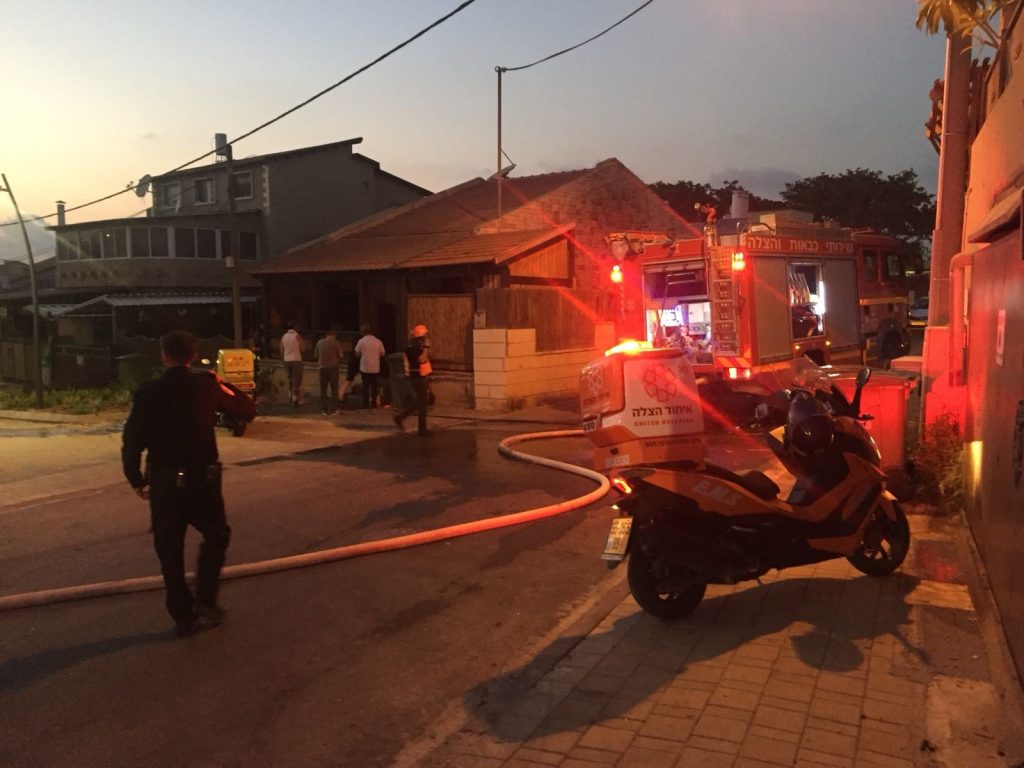 Last night, United Hatzalah volunteers, like many of the residents of Sderot and the other towns in the Gaza periphery, were up all night due to a constant barrage of rocket fire from Hamas in the Gaza Strip. The rocket fire was meant to kill them, their children and their families. 15 people were injured and dozens more suffered from emotional or psychological shock and distress.

A volunteer who served the communities in and around Gaza in their time of need last night wrote his thoughts on the events that transpired.

It’s just after 7:30 p.m. and I am getting ready to go to a social event at the home of a good friend of mine from work. He lives in the nearby city of Netivot. That is when I hear the first siren wail. The red alert siren sounds and I don’t have time to make it to a protective shelter when a massive explosion erupts from somewhere behind me. It is very clear that the rocket fired from Gaza has hit something in the city and that it exploded very close to my house. I contact United Hatzalah’s National Dispatch and Command Center in Jerusalem and try to gather information about where exactly the rocket exploded. From what they tell me, the rocket exploded the next street down from my home.

I rush over on my ambucycle, and just seconds later I arrive at a scene of total chaos. I see a man bleeding from cuts that he sustained in his arm when pieces of shrapnel from the rocket struck him. When I finish treating him, I see that a number of people are suffering from emotional shock and I begin treating and stabilizing them. From there I am dispatched by the Command Center to another location in the next neighborhood where another rocket exploded after striking a direct hit in the courtyard of a house. I treat more people suffering from shock.

More sirens begin to sound, and I realize that it will likely be a very long night. I jump from location to location, wherever the rockets fall, treating the people who suffered physical and emotional injuries and comforting others who are suffering from stress reactions. I, together with my team of volunteers in the city, spend the entire night treating people. My friend heard what was happening in the city, and understood that I wouldn’t be coming. He tried calling but I was to busy to answer. I sent him a message letting him know that I was okay and that I will speak with him later in the week, but for now, there was work to do.

The night carries on. The rockets continue to fall. The Iron Dome intercepts some, but not nearly enough. Rockets fall, people get hurt, and I rush to the scene to help them. This was the pattern of my night, just like it was a few weeks ago, the last time Hamas decided to fire rockets at us for a day straight, and just like it has been, on and off for the past 12 years.

The clock turns over and suddenly it is 4:10 a.m. on Thursday morning. Where did the time go? I walk into my house in order to sleep for a bit before I have to get up to pray in the morning and then go to work. I don’t even make it to the bedroom, rather I collapse on my sofa.

But our enemies have different plans. Another siren sounds and another rocket falls. They don’t want us to sleep and they don’t want us to work. They want to eradicate us entirely. But I, together with my fellow first responders at United Hatzalah, will do everything we can to make sure that the people who live here are safe and receive the treatment they need when they need it.”