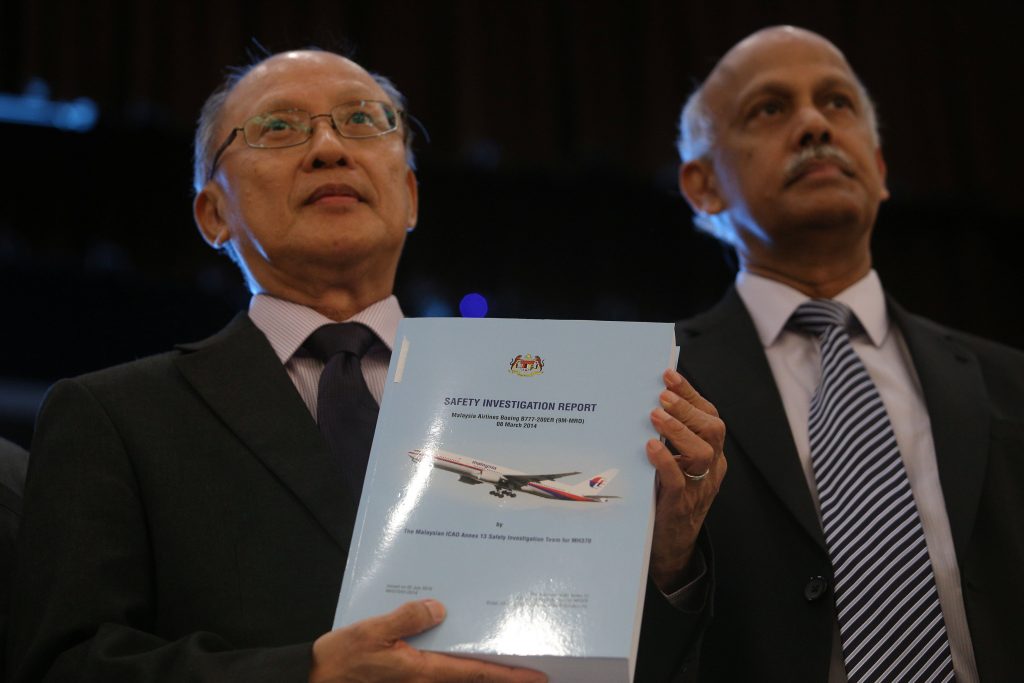 Investigators released a report on missing Malaysia Airlines flight MH370 on Monday, saying the Boeing 777’s controls were likely deliberately manipulated to take it off course but they were not able to determine who was responsible.

The 495-page report draws no conclusion about what happened aboard the plane that vanished with 239 people on board en route to Beijing from Kuala Lumpur on March 8, 2014, leaving one of the world’s greatest aviation mysteries unsolved.

“The answer can only be conclusive if the wreckage is found,” Kok Soo Chon, head of the MH370 safety investigation team, told reporters.

On May 29, Malaysia called off a three-month search by U.S. firm Ocean Infinity, which spanned 43,243 sq. miles in the southern Indian Ocean and ended with no significant findings.

It was the second major search after Australia, China and Malaysia ended a fruitless $147.06 million-search across an area of 46,332 sq. miles last year.

Malaysian and international investigators have been looking into why the jet veered thousands of miles off course from its scheduled route before eventually plunging into the Indian Ocean.

The last communication from the plane was from the Captain Zaharie Ahmad Shah who signed off with “Good night, Malaysian three seven zero”, as the plane left the Malaysian airspace and later turned off course.

A 440-page final report by the Australian Transport Safety Bureau (ATSB) last year showed that Zaharie had flown a route on his home flight simulator six weeks earlier that was “initially similar” to the one actually taken by MH370.

The Malaysian police previously concluded there were no unusual activities on the home simulator.

Kok said the investigators examined the history of the pilot and the first officer, and they were satisfied with their background and training and mental health.

“We are not of the opinion it could have been an event committed by the pilots,” he said, but added they were not ruling out any possibility since the in-air turn-back was done manually and the systems in the plane were also manually turned off.

“We cannot exclude that there was an unlawful interference by a third party,” Kok said.

He added all the passengers of the 15 countries had their backgrounds checked by their respective countries and all came back with a clean bill of health.

The inability to locate MH370’s crash site has fueled conspiracy theories and online debates over the last four years.

Theories range from mechanical error or a remote-controlled crash, to more bizarre explanations like alien abduction and a Russian plot. Kok said they looked into each theory and rumor raised on social media.

“We had over 60 allegations … we removed them one by one and saw what remained behind,” Kok said.

The report said there was no sign the plane was evading radar detection or that it was taken over by remote control. No irregularities were found in the on-board cargo, which included items like lithium batteries and about 2,500 kgs of mangosteen.

In all, 27 pieces of aircraft debris have been collected from various places around the world but only three wing fragments that washed up along the Indian Ocean coast have been confirmed to be from MH370.

Investigators highlighted some mistakes made by the Kuala Lumpur and Ho Chi Minh City air traffic control centers and made safety recommendations to ensure such incidents do not occur again.

Transport Minister Antony Loke said in a statement that Malaysia would investigate any misconduct committed based on the findings.

The next-of-kin of the passengers were briefed on the final report by investigators earlier on Monday.

“We hope that these mistakes will not be repeated and that measures are put in place to prevent them in the future,” said Grace Nathan, a lawyer whose mother, Anne Daisy, was on the plane.

“We hope that all sides can continue to remain in close contact and coordination, to properly carry out relevant follow-up work,” he told a daily news briefing, without elaborating.

The majority of passengers on board were Chinese.