The Longest Lunar Eclipse of The 21st Century Is Coming: Here’s What You Need to Know 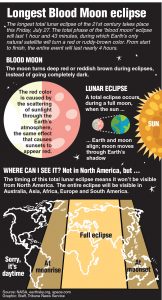 The longest lunar eclipse of the 21st century is coming up, and you don’t want to miss it.

On Friday, the moon will be fully engulfed in the heart of Earth’s shadow for 1 hour, 42 minutes and 57 seconds.

It doesn’t get much better than that. The longest possible duration of a lunar eclipse is one hour and 47 minutes, according to EarthSky.

If you live in North America, you will not be able to see the marathon celestial event in person — unless you live in the far eastern part of Newfoundland. Unfortunately the event will be occurring during our daytime. But if you happen to be in eastern South America, Europe, Africa, the Middle East, Asia or Australia, you are in luck.

Even though the Earth will be lined up directly between the moon and the sun, the moon will not be blacked out completely.

Instead, it will appear to be a deep copper red as it reflects the scattered light of all the sunsets and sunrises on Earth back at us.

If you were standing on the moon at the time of the eclipse, the Earth would look like a black disk outlined in glowing red. That’s because some light from the sun bends around the edge of the Earth where the blue and green wavelengths are scattered by our atmosphere.

Friday night’s lunar eclipse will be more than 20 minutes longer than the last one, which occurred earlier this year on Jan. 31. That one lasted for one hour and 16 minutes, according to NASA.