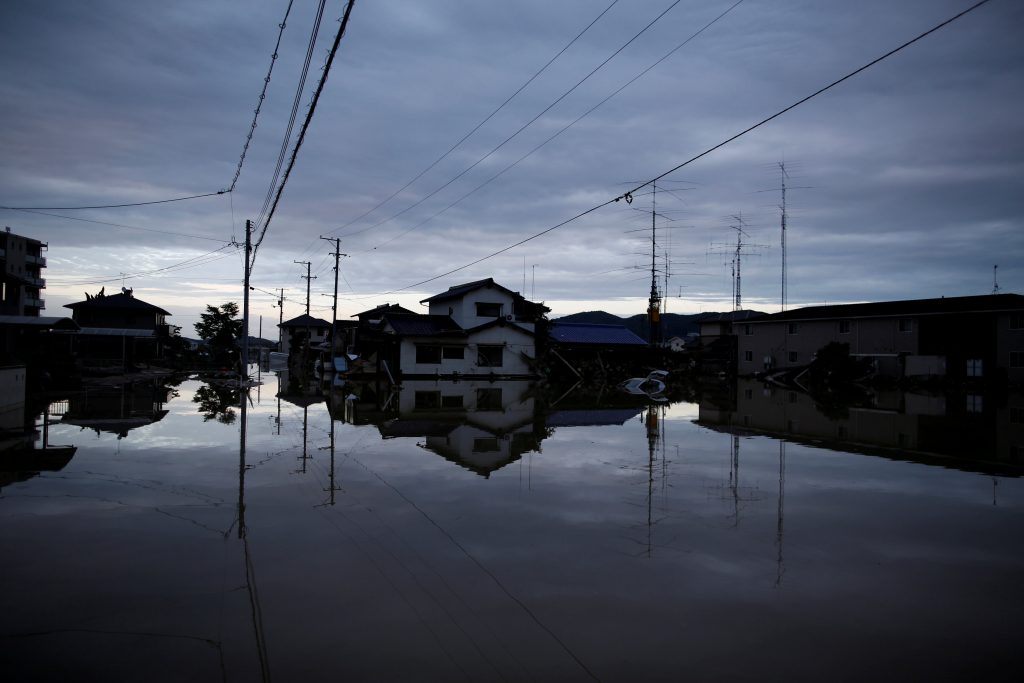 The death toll from torrential rain and landslides in western Japan rose to 88 people early on Monday, with dozens still missing after the rescue of more than 2,000 stranded in the city of Kurashiki.

Evacuation orders were in place for nearly 2 million people and landslide warnings were issued in many prefectures.

In hard-hit western Japan, emergency services and military personnel used helicopters and boats to rescue people from swollen rivers and buildings, including a hospital.

Scores of staff and patients, some still in their pajamas, were rescued from the isolated Mabi Memorial Hospital in boats rowed by members of Japan’s Self Defense Forces.

A city official said late on Sunday that 170 patients and staff had been evacuated, while public broadcaster NHK later said about 80 people were still stranded.

“I’m most grateful to the rescuers,” said Shigeyuki Asano, a 79-year-old patient who spent a night without electricity or water. “I feel so relieved that I am now liberated from such a bad-smelling, dark place.”

Kurashiki, with a population of just under 500,000, was among the hardest hit by rains that pounded many parts of western Japan, with the death toll exceeding the 77 killed in heavy rains and landslides in 2014 and the highest since a typhoon that killed 98 people in 2004.

News footage showed a massive rescue operation, with 2,310 rescued in the city by evening, according to NHK, while search-and-rescue teams looked for others.

The overall death toll from the rains in Japan rose to at least 88 after floodwaters forced several million people from their homes, NHK reported early on Monday.

An additional 58 were missing, NHK said, and more rain was set to hit some areas for at least another day.

The rain set off landslides and flooded rivers, trapping many people in their houses or on rooftops.

“This is a situation of extreme danger,” an official at the Japanese Meteorological Agency (JMA), told a news conference.

A 3-year-old girl whose home was hit by a landslide in Hiroshima prefecture was found dead by a search team.

“It’s very painful,” said one elderly man watching nearby. “I have a granddaughter the same age. If it were her, I wouldn’t be able to stop crying.”

Japan’s government set up an emergency management center at the prime minister’s office and some 54,000 rescuers from the military, police and fire departments were dispatched across a wide swath of western and southwestern Japan.

Two sisters from an elementary school of just six pupils on the small island of Nuwa in Ehime prefecture were among the dead. The younger, a first-grader, was a star and the hope of the depopulated island, the principal told NHK.

“It was such a sudden disaster, I just cannot come to grips with it,” the principal said.

Emergency warnings for severe rain in 11 prefectures, the most since a new warning system was introduced in 2013, had been lifted by evening, but advisories for heavy rain and landslides remained in effect in many areas.

Roads were closed and train services suspended in parts of western Japan, while Shinkansen bullet-train services resumed on a limited schedule after being suspended on Friday.

The rain began late last week as the remnants of a typhoon fed into a seasonal rainy front.

Automakers including Mazda Motor Corp and Daihatsu Motor Co suspended operations at several plants on Saturday and had yet to decide on plans for the coming week.

Electronics maker Panasonic Corp said one plant in Okayama, western Japan, could not be reached because of road closures, although it had been closed for the weekend anyway. A decision about next week would be made on Monday, it said.