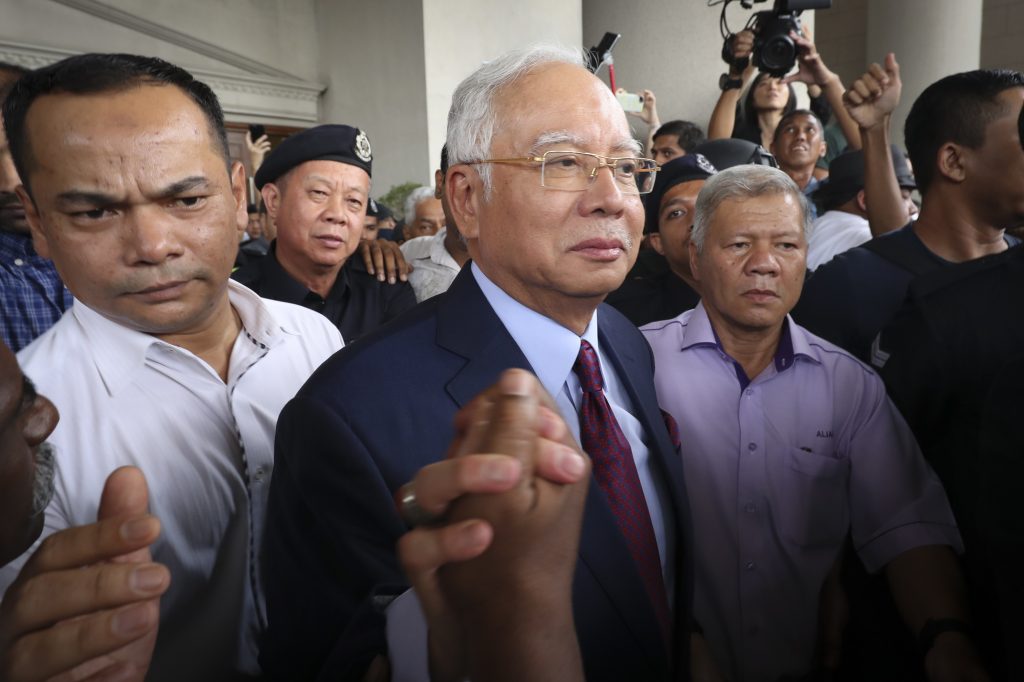 He pleaded not guilty to all charges. “I claim trial,” he said in a barely audible voice as he stood in the dock at the High Court in Kuala Lumpur. A judge set bail at 1 million ringgit in cash ($250,000) and ordered Najib to surrender his two diplomatic passports.

The patrician, luxury-loving Najib, wearing a suit and a red tie, appeared calm and smiled as he was escorted into the court complex. He was arrested Tuesday by anti-graft officials over the suspicious transfer of 42 million ringgit ($10.4 million) into his bank accounts from SRC International, a former unit of the 1MDB state investment fund that U.S. investigators say was looted of billions by associates of Najib.

Najib was charged with abuse of power leading to gratification under Malaysia’s anti-corruption law and three counts of criminal breach of trust. Each charge has a maximum penalty of 20 years in prison. Whipping is also a penalty, but Najib would be exempt because of his age.

Anger over the 1MDB saga led to the shocking defeat of Najib’s long-ruling coalition in May 9 elections and ushered in the first change of power since independence from Britain in 1957.

At a news conference after the hearing, Najib said a trial was “the best chance for me to clear my name after all the slander and accusations.” It is set to start Feb. 8, subject to confirmation at a preliminary hearing next month.

Deputy Prime Minister Wan Azizah Wan Ismail said the rule of law must be followed in the prosecution of Najib.

“I don’t think it’s fair for anyone to be judged on a media trial — this is important,” Wan Azizah said Wednesday at a conference in Mongolia. “The other thing is that, however I feel, I want the court to be independent and, therefore, give him all the avenue he has under the law to defend himself.”

Wan Azizah is the wife of reformist leader Anwar Ibrahim. Anwar was convicted in 2015 of a charge of immorality that he said was concocted to destroy his political career, and was freed in May after obtaining a royal pardon.

Najib set up 1MDB when he took power in 2009 but the fund amassed billions in debts and is being investigated in the U.S. and several other countries.

Najib and his wife were questioned last month over the SRC case by the anti-graft agency and were barred from leaving the country.

The attorney general’s case says the $10 million that Najib allegedly received via SRC was a bribe for approving government guarantees of loans totaling 4 billion ringgit (nearly $1 billion) in 2011 and 2012 that apparently became part of the ransacking underway at 1MDB.

Police have also seized jewelry and valuables valued at more than 1.1 billion ringgit ($272 million) from properties linked to Najib.

U.S. investigators say $4.5 billion was stolen and laundered from 1MDB by Najib’s associates, including some $700 million that landed in Najib’s bank account. While in power, Najib said the $700 million was a donation from the Saudi royal family.

Najib’s lawyer Muhammad asked for the case to be expedited.

Najib “is anxious to clear his name,” he told the High Court. “We are pretty confident about this case.”

Bridget Welsh, a Southeast Asia expert at John Cabot University in Rome, said Najib’s arrest was the “inevitable outcome” after he lost power.

“It shows the resolve of the new government to address previous abuses of power. It has been done judiciously so far and speaks to a needed reckoning for Malaysia and a key step toward a cleaner governance,” she said in an email.