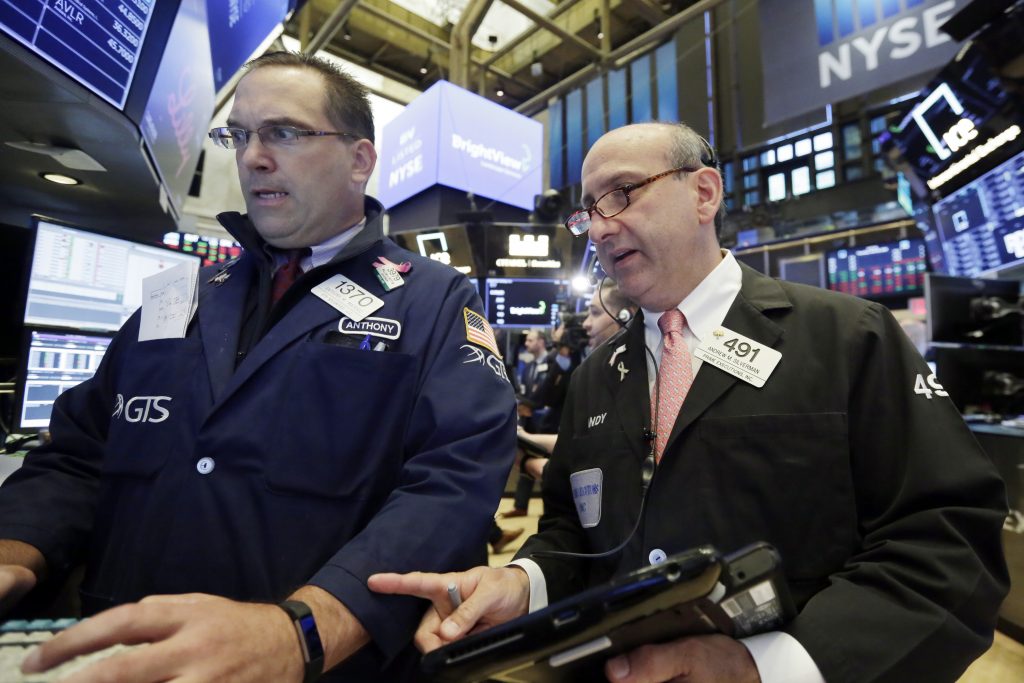 U.S. stocks are slightly higher Thursday, as gains for technology companies and banks help the market recover some of its recent losses. Amazon said it’s buying an online pharmacy and launching its own delivery van business; and drugstores and medication distributors, as well as delivery companies, are sinking. U.S. crude oil is at its highest price since late 2014. A day ago, stocks closed at their lowest level in about a month.

This week investors again find themselves trying to discern whether the U.S. and China are headed for a full-blown trade war or if they will find common ground in their dispute over trade and intellectual property. Reports and statements from U.S. officials have often been contradictory, leading the market to lurch between gains and losses, sometimes by the hour. On Wednesday the S&P closed Wednesday at its lowest level since May 29.

The U.S. is set to impose a 25 percent tariff on billions of dollars of Chinese products starting July 6. In response, China will raise import duties on $34 billion worth of American goods.

AMAZON STRENGTH: Amazon shook up multiple industries Thursday after it said it’s buying online pharmacy PillPack, which offers pre-sorted dose packaging and home delivery. Investors expected Amazon to use its muscle to reduce costs and drug prices; and that led to sharp losses for drugstores, pharmacy benefits managers and companies that distribute medications.

Amazon also announced a new program, under which contractors around the country can launch businesses that deliver Amazon packages, meaning that Amazon will have new ways to deliver products without relying on companies like UPS and FedEx. UPS lost 2.7 percent to $105.49; and FedEx declined 1.8 percent to $225.52.

STRATEGY SHIFTS: Madison Square Garden Co. said it will consider spinning off its sports division, into a separate publicly traded company. The stock jumped 11.4 percent to $296.48.

Mexican food chain Chipotle said it will restructure its business, closing some restaurants that are struggling and making changes to its menu. It expects up to $135 million in total costs. Analysts and investors took the news as a sign it’s going to take more time before Chipotle’s business improves substantially. The shares lost 7.8 percent to $421.77.

ENERGY: Benchmark U.S. crude continued to surge and gained 1.1 percent to $73.59 a barrel in New York. It’s at its highest price since November 2014. Brent crude, used to price international oils, lost 0.1 percent to $77.41 a barrel in London.

Oil prices have rallied over the last week. First, investors concluded that OPEC countries will not increase oil production by as much as they feared. Then the U.S. started pressuring countries to stop importing oil from Iran, the world’s sixth-largest producer of oil. The Trump administration is threatening other countries— including close allies such as South Korea — with sanctions, if they don’t cut off Iranian imports by early November, essentially erecting a global blockade.

BIG SALE: BJ’s Wholesale Club jumped after the company went public again. The stock started trading at $17 a share, at the high end of the company’s projections, and then advanced 27.6 percent to $21.70. BJ’s was taken private in 2011.

ECONOMIC GROWTH: The Commerce Department said the U.S. economy grew just 2 percent from January to March, slower than it previously estimated, as consumer spending and business inventories were weaker. But experts think the current quarter, which ends Saturday, is going to be much stronger thanks to an increase in spending by consumers.