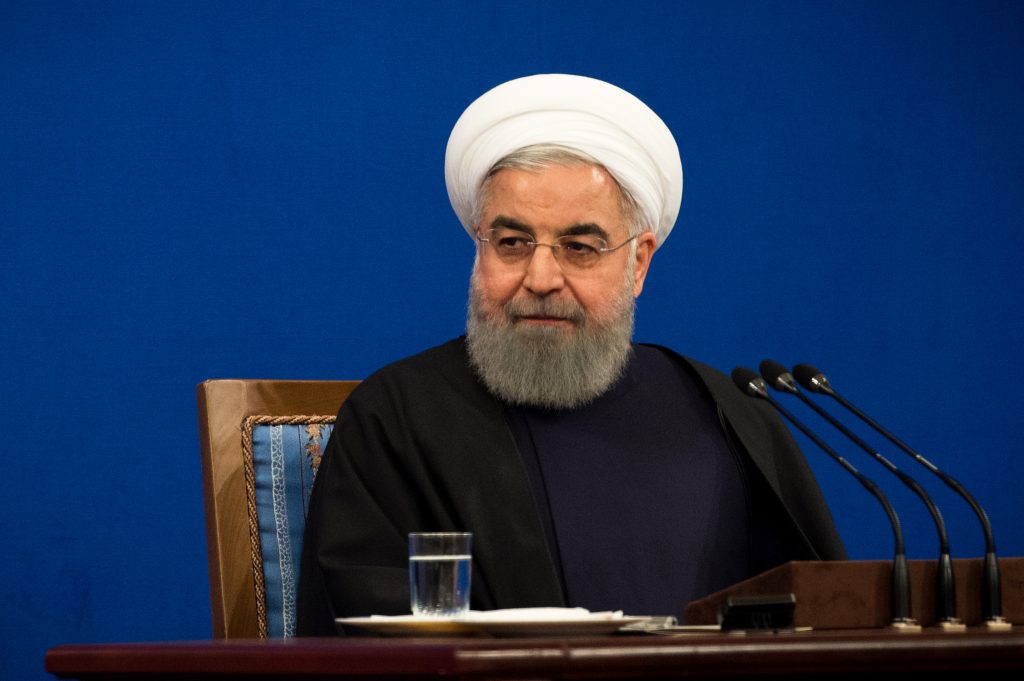 Iranian President Hassan Rouhani has sent a list of demands to France, Germany and Britain as its price for staying in the nuclear accord, vowing not to give in to growing U.S. pressure to curb its oil sales and complicate efforts to salvage the deal.

The statement on the official government website, dolat.ir, didn’t give details of the letters Rouhani sent to French President Emmanuel Macron, German Chancellor Angela Merkel and U.K. Prime Minister Theresa May. But it said he had decided to spell out Iran’s conditions for staying in the deal to his European partners before it’s too late.

Iran and the five remaining parties are scrambling to save the agreement after President Donald Trump announced last month that the U.S. was withdrawing and would reimpose sanctions on the Islamic Republic. Trump warned at the time that other nations would face sanctions unless they stopped trading with the Islamic Republic. On Tuesday, the State Department said it’s pressing allies to end all imports of Iranian oil — the country’s economic lifeline — by Nov. 4.

In a speech to senior officials broadcast live by state media, Rouhani prepared the Iranian people for tough times ahead, saying they could survive any difficulties.

Iran has said if it can’t reap any economic benefits from remaining in the deal, which traded sanctions relief for curbing the Iranian nuclear program, then it would have little incentive to comply with its terms and would significantly ramp up uranium enrichment. The deal curtailed Iran’s enrichment activities because they can eventually be a key component of bomb-making. Iran has always maintained that as a policy, it hasn’t pursued nuclear weapons.

The EU has pledged to defend the agreement, protect European companies hurt by the U.S. decision and offer alternative financing for Iranian investments. However, finding practical ways around U.S. sanctions has proved tricky — and grew more complicated with President Trump’s hardball approach to oil sales — making it increasingly difficult for European partners to persuade Tehran to stay in the deal.

The Iranian president, a champion of the nuclear agreement, has come under increasing pressure both from supporters who had thought it would deliver economic salvation, and from opponents who say the government has been ineffectual against the U.S. campaign to batter Iran’s economy.

Long hurt by international sanctions, mismanagement and corruption, the economy has gone into a downward spiral over the unraveling of the nuclear deal, and protests against the country’s leaders have broken out in recent months. This week, gold and jewelry traders shut down Tehran’s Grand Bazaar to protest rising prices and poor business.

Secretary of State Mike Pompeo sought to appeal directly to disgruntled Iranians on Wednesday, saying that “the world hears their voice.”

“The people of Iran are tired of the corruption, injustice and incompetence from their leaders,” he said in a statement.

One of the few tangible financial gains Iran has seen from the nuclear deal has been an increase in its oil exports. A dramatic reduction could pummel economic growth and deepen a foreign currency shortage that has seen the rial plunge against the dollar.

In a sign that Trump’s policies were already emptying people’s pockets, the central bank of Iran reported on Tuesday that consumer prices in June grew at their fastest in three years, to 13.7 percent from a year earlier. Last week, Iran banned import of 1,400 non-essential and luxury goods to reduce the amount of foreign currency leaving the country. It imposed restrictions on foreign-exchange transactions even before the U.S. pulled out of the deal as growing uncertainty hit its currency.

In comments largely addressing his domestic critics, Rouhani promised his government would cut spending, reduce international travel and fly economy class to ease the burden on the public. He also said his government would import raw materials at affordable prices to help domestic manufacturers and ensure supply for Iranians.

Additionally, he urged ministries to issue government bonds to give people alternatives to the dollar and the euro for investing their assets.

“If anyone thinks the government will resign or step aside, or go, they are mistaken,” Rouhani said.