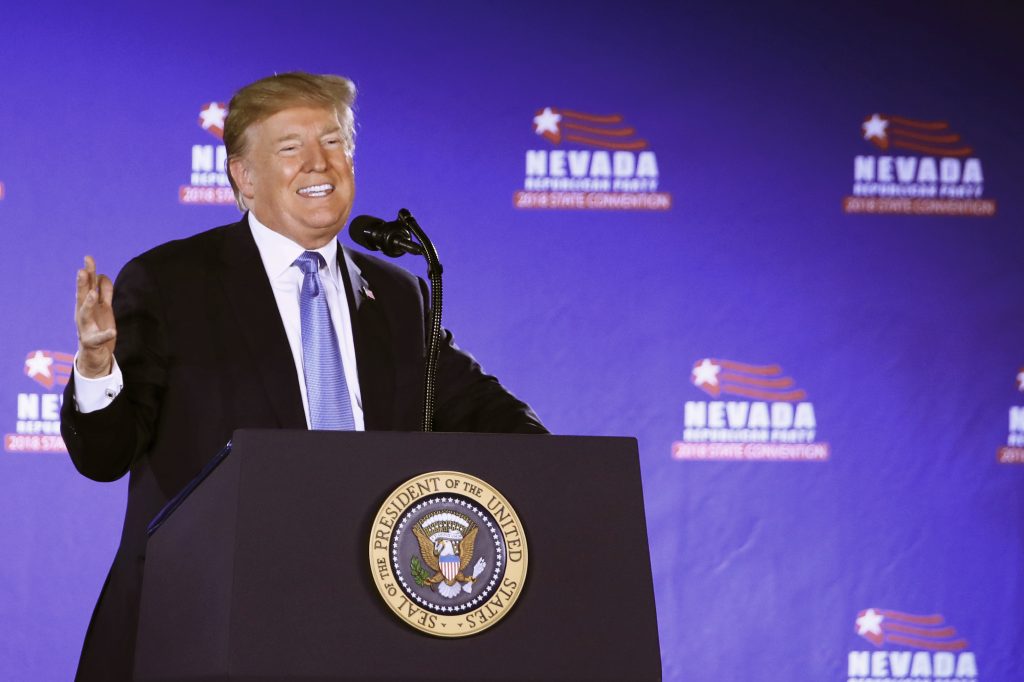 President Donald Trump pressed his tough immigration stance at a Nevada political convention Saturday, telling hundreds “we have to be very strong” to keep people, including violent gang members, from entering the country illegally.

Trump was in Las Vegas to boost the candidacy of Dean Heller, the only Republican U.S. senator seeking re-election in a state that Democrat Hillary Clinton won in 2016. Trump and Heller have papered over their once prickly relationship to present a united front in their shared goal of helping Republicans maintain, if not expand, their thin 51-49 majority in the Senate.

Heller was among the officials waiting on the sweltering airport tarmac to greet Trump.

In remarks to several hundred people attending the Nevada GOP Convention, Trump portrayed himself as tough against illegal immigration, saying at one point, “I think I got elected largely because we are strong on the border.”

But he excluded any mention of the fact that, following a massive public outcry, including from members of his own family, he reversed course earlier this week and ended the practice of separating families illegally crossing the southern border into the U.S.

Trump was also holding a separate event promoting tax cuts he signed into law six months ago before flying back to Washington.

Heller, a past critic of Trump, had renounced Trump during the campaign as someone who “denigrates human beings.” Heller suggested he wouldn’t vote for Trump, but later said he did. Heller also received a $2,000 donation from Trump in 2015 but gave it to charity.

Once in office, Trump publicly scolded Heller for holding up the GOP’s long-promised effort to repeal President Barack Obama’s health-care law. He later repaired his relationship with Trump and helped deliver the rewrite of U.S. tax laws to Trump’s desk.

Trump intervened in Nevada’s Senate race in March and persuaded Heller’s main challenger, Danny Tarkanian, to step aside and run for a U.S. House seat instead. Heller has said he didn’t ask Trump for the favor.

Trump has stepped up the pace of his political appearances in recent weeks.

He campaigned in Minnesota this week for a GOP House candidate, to be followed by a stop Monday in South Carolina to boost Gov. Henry McMaster’s fortunes in a Republican gubernatorial runoff on Tuesday.

Trump is also scheduled to appear in North Dakota on Wednesday on behalf of Republican Kevin Cramer, who is challenging U.S. Sen. Heidi Heitkamp, a Democrat seeking another six-year term in a state Trump won by 36 percentage points in 2016.