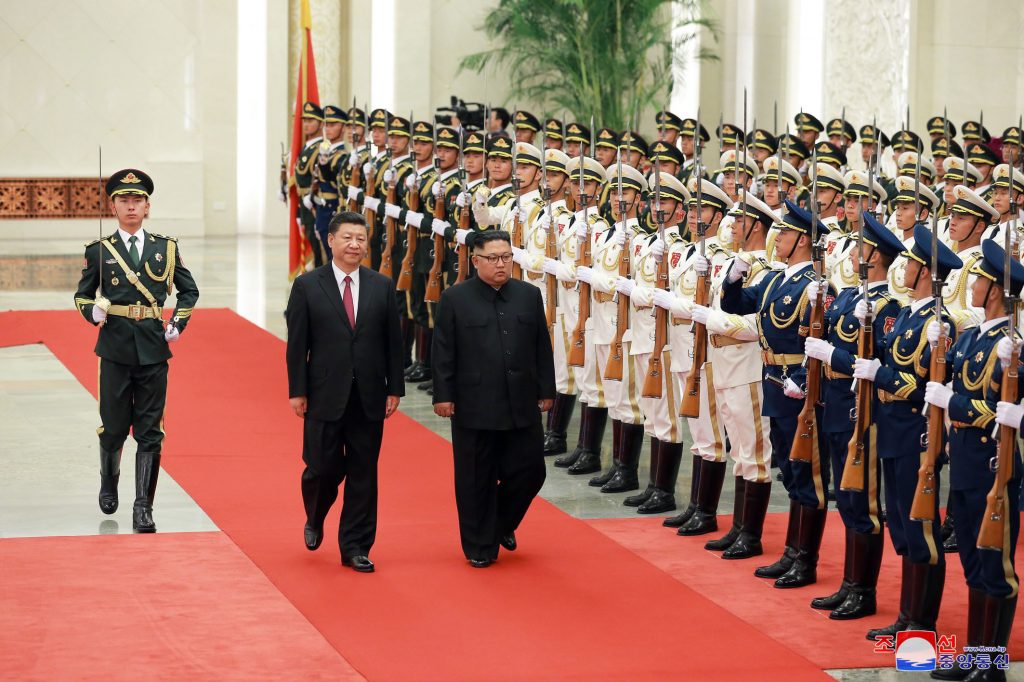 South Korea’s president on Wednesday urged Pyongyang to show a plan for concrete steps toward denuclearization, raising the pressure on North Korean leader Kim Jong Un during his visit to Beijing to discuss the outcome of his summit with President Donald Trump.

Kim is in Beijing on his third visit to China this year, underscoring the major improvement in relations between the communist neighbors.

A report by the Korean Central News Agency said Kim expressed his gratitude to Chinese President Xi Jinping when they met on Tuesday. KCNA said that during a banquet hosted by Xi, Kim also said Pyongyang and Beijing are seeing their ties develop into “unprecedentedly special relations.”

At the summit with Trump in Singapore, Kim pledged to work toward denuclearization in exchange for U.S. security guarantees. The U.S. and South Korea suspended a major joint military exercise that was planned in August in what was seen as a major victory for North Korea and its chief allies, China and Russia.

“It’s necessary for North Korea to present far more concrete denuclearization plans, and I think it’s necessary for the United States to swiftly reciprocate by coming up with comprehensive measures,” Moon said. Moon’s office said he made the remarks to Russian media ahead of his trip to Moscow later this week.

Moon, who met with Kim twice in recent months, said the North Korean leader is willing to give up his nuclear program and focus on economic development if he’s provided with a reliable security guarantee. Moon described Kim as “forthright,” ”careful” and “polite.”

“China has an important role to play on issues of peace and security on the Korean Peninsula,” Kang said, adding that South Korea expects discussions in Beijing to help move forward the process of denuclearization.

China backs the North’s call for a “phased and synchronous” approach to denuclearization, as opposed to Washington’s demand for an instant, total and irreversible end to the North’s nuclear programs.

There was no official word on Kim’s activities on Wednesday, although South Korea’s Yonhap news agency said his motorcade was seen at the Chinese Academy of Agricultural Sciences in Beijing. He was expected to return to Pyongyang later in the day.

China has encouraged Kim’s shift toward economic development and has touted the prospects of more trade and investment if Pyongyang makes progress in talks on abandoning its nuclear weapons and long-range missile programs.

That could allow the lifting of U.N. Security Council economic sanctions that have caused a plunge in the North’s foreign trade, although the U.S. insists easing of sanctions can only come after Pyongyang shows it has ended its nuclear programs. The U.S. says China is in agreement on that point, although Chinese officials have repeatedly stated that sanctions should not be considered an end to their own.