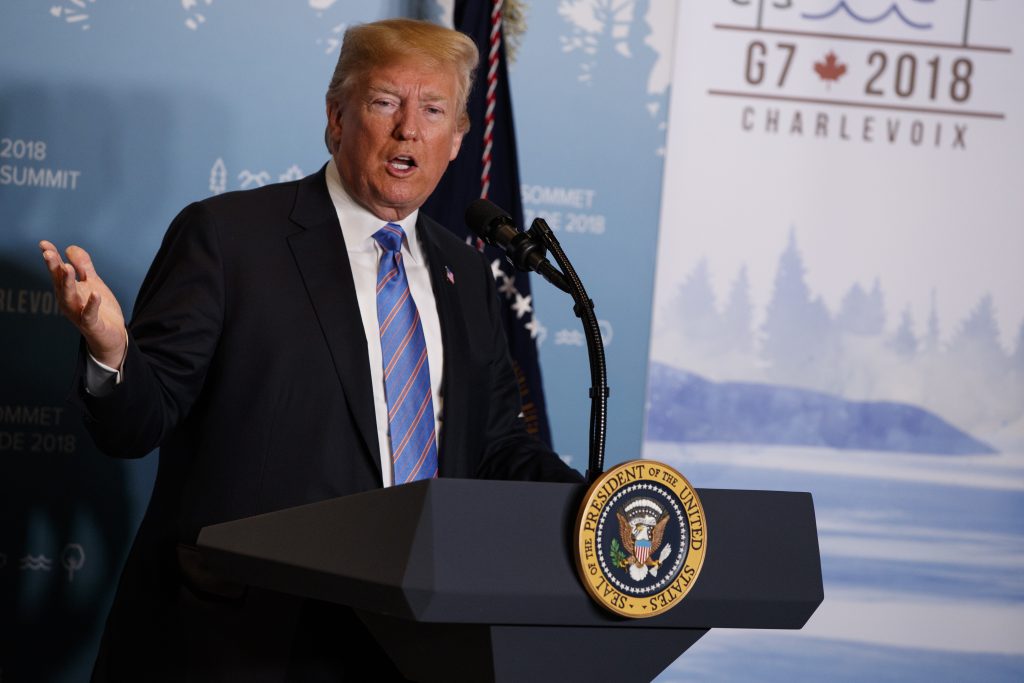 New York’s attorney general sued President Donald Trump and his foundation Thursday, accusing him of illegally using the charity’s money to settle disputes involving his business empire, and to promote his political fortunes during his run for the White House. The president blasted the case as politically motivated.

The lawsuit seeks $2.8 million in restitution, additional unspecified penalties and the dissolution of the foundation, which Trump had already pledged to dismantle.

The attorney general’s two-year investigation detailed what it said was a closely coordinated effort between Trump’s campaign and the foundation to burnish his political image by giving out big grants of other’s people money to veterans’ organizations during the run-up to the Iowa caucuses, the first presidential nominating contest of 2016.

It accused the foundation of “improper and extensive political activity, repeated and willful self-dealing transactions and failure to follow basic fiduciary obligations.”

Underwood referred her findings to the IRS and the Federal Election Commission for possible further action. IRS and FEC representatives declined to comment.

In a couple of tweets, Trump called the case “ridiculous.”

“I won’t settle this case!” he wrote.

The 31-year-old foundation said that it has given more than $19 million to charitable causes while keeping expenses minimal, and that Trump and his companies have contributed more than $8 million.

“This is politics at its very worst,” the charity said in a statement, noting that the former New York Attorney General who began the investigation, Democrat Eric Schneiderman, was a vocal Trump opponent.

Schneiderman resigned last month after he was accused of physical abuse; he denied the allegations. Trump’s tweets also pointed to Schneiderman’s resignation and his support for Trump’s 2016 Democratic presidential rival, Hillary Clinton.

Schneiderman “never had the guts to bring this ridiculous case, which lingered in their office for almost 2 years,” Trump wrote. “His disciples brought it when we would not settle.”

Underwood is a career government lawyer who was appointed after Schneiderman’s resignation. She has said she doesn’t intend to run for election.

Schneiderman started investigating the charity and ordered it to stop fundraising in New York in 2016, after The Washington Post reported that the foundation’s spending personally benefited the presidential candidate.

Some of those expenditures — uncovered by The Post — were cited in the lawsuit, including a $100,000 payment to settle legal claims against Trump’s Mar-a-Lago resort in Palm Beach, Florida; $158,000 to resolve a suit over a prize for a hole-in-one contest at Trump National Golf Club in Briarcliff Manor, New York; $10,000 to buy a 6-foot (1.8-meter) portrait of Trump at a charity auction; and $5,000 for advertisements published in the programs for charitable events. The ads promoted Trump’s hotels.

The suit also singled out a $32,000 payment that the foundation made to satisfy a Trump company pledge to contribute to a land-preservation group.

After New York’s attorney general began investigating, Trump’s business empire reimbursed the foundation for the various payments and returned the painting to the foundation.

The Trump Foundation’s mission says its funds are to be used “exclusively for charitable, religious, scientific, literary or educational purposes,” according to the lawsuit.

In exchange for their tax-exempt status, charities are required to follow rules that include a strict prohibition against involvement in political campaigns.

But Trump’s foundation cut a $25,000 check in 2013 to Republican Florida Attorney General Pam Bondi’s re-election campaign, the lawsuit notes. After a watchdog group complained to the IRS in 2016, Trump reimbursed the foundation and paid a $2,500 fine.

Then Trump’s foundation was “co-opted” by his presidential campaign, particularly in the run-up to the Iowa caucuses, the lawsuit says.

Spurning a Republican candidates’ debate on Jan. 28, 2016 — four days before the caucuses — Trump instead participated in a broadcast rally and fundraiser for veterans’ organizations.

The event raised approximately $5.6 million, about $2.8 million of which went to the Trump Foundation; the rest was given directly by donors to veterans groups, the lawsuit says.

Then the foundation “ceded control” over the money to campaign staff members, the suit says.

“Is there any way we can make some disbursements this week while in Iowa?” then-Campaign Manager Corey Lewandowski wrote in an email to the chief financial officer of Trump’s business, the Trump Organization.

Lewandowski did not immediately respond to a request for comment Wednesday.

The foundation went on to make five grants of $100,000 before the caucuses, with Trump presenting giant checks at a series of campaign rallies to applause and praise from such figures as Jerry Falwell Jr., the president of Liberty University and son of the late Rev. Jerry Falwell, who was a force in GOP politics.

Trump didn’t give any money personally at the time, but several months later, after media pressure, followed through on a pledge to donate $1 million.

During his campaign, Trump was highly critical of Clinton’s family charity, the Clinton Foundation, for taking donations from people who met with her while she was secretary of state.

Underwood’s suit was filed the same day the Justice Department’s inspector general issued a report sharply criticizing the FBI and former Director James Comey for their handling of the investigation into Clinton’s email practices.