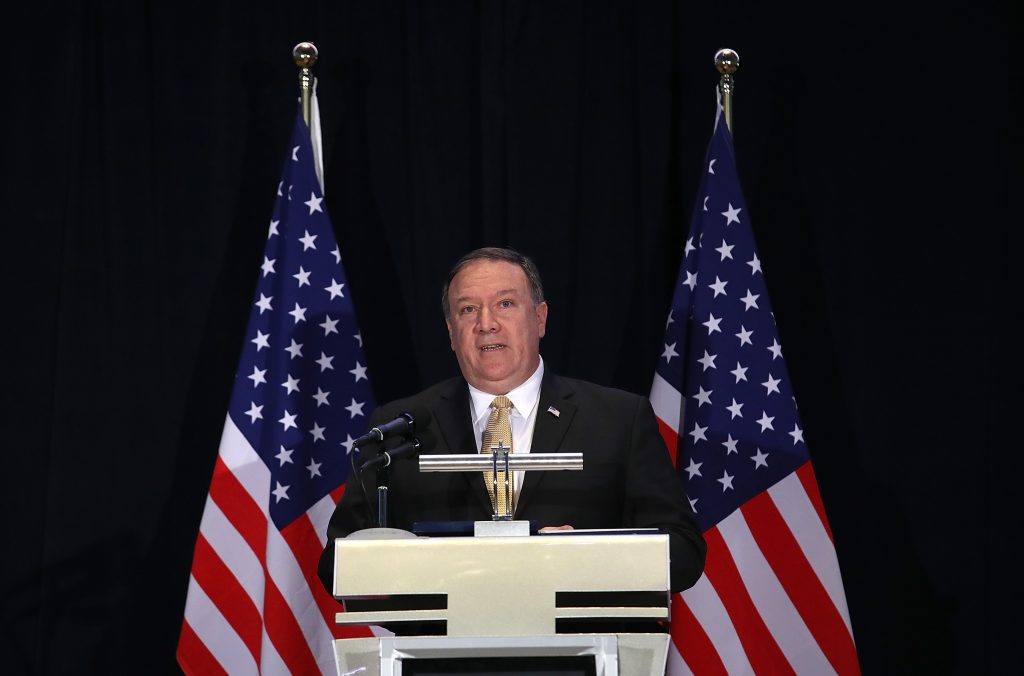 President Donald Trump will agree to nothing less than North Korea’s complete denuclearization, and is prepared to, in return, guarantee the North Korean regime’s security, Secretary of State Mike Pompeo said Monday.

Speaking at a press briefing for the 350 American journalists gathered in Singapore for Tuesday’s historic summit between Trump and North Korean dictator Kim Jong Un, Pompeo said the talks between the two countries have been moving well, and that the administration expects that the talks “will come to their logical conclusion even more quickly than we had anticipated.”

“The fact that our two leaders are sitting down face to face is a sign of the enormous potential of something that will immensely benefit both of our peoples and the entire world,” said Pompeo. “President Trump believes that Chairman Kim has an unprecedented opportunity to change the trajectory of our relationship and bring peace and prosperity to his country.”

Echoing Trump’s statements that the Singapore Summit may just be the start to negotiations between the two countries, Pompeo said the U.S. is “hopeful that this summit will have set the conditions for future productive talks.”

Pompeo reiterated that the U.S. will not sign any agreement that “will fail to adequately address the North Korean threat.”

“The ultimate objective we seek from diplomacy in North Korea has not changed,” said Pompeo. “The complete, verifiable and irreversible denuclearization of the Korean peninsula is the only outcome that the United States will accept,” said the secretary of state, repeating an administration phrase that has come to be known as CVID.

“Sanctions will remain until North Korea completely and verifiably eliminates its weapons-of-mass-destruction programs.

“If diplomacy does not move in the right direction, and we are hopeful that it will continue to do so, those measures will increase.”

It is widely believed that the North Korean dictator sees his weapons programs as the only guarantee of his regime’s survival.

Pompeo said Monday that “President Trump recognizes Chairman Kim’s desire for security, and is prepared to ensure that a North Korea free of weapons of mass destruction is also a secure North Korea.”

Pompeo made no mention of whether the summit negotiations would include discussions of human-rights violations in North Korea, and ignored a shouted question on the topic as he left after the press conference.

NBC News, citing two unnamed administration officials, reported Monday that the U.S. has decided not to bring up the issue of human rights at the Singapore Summit.