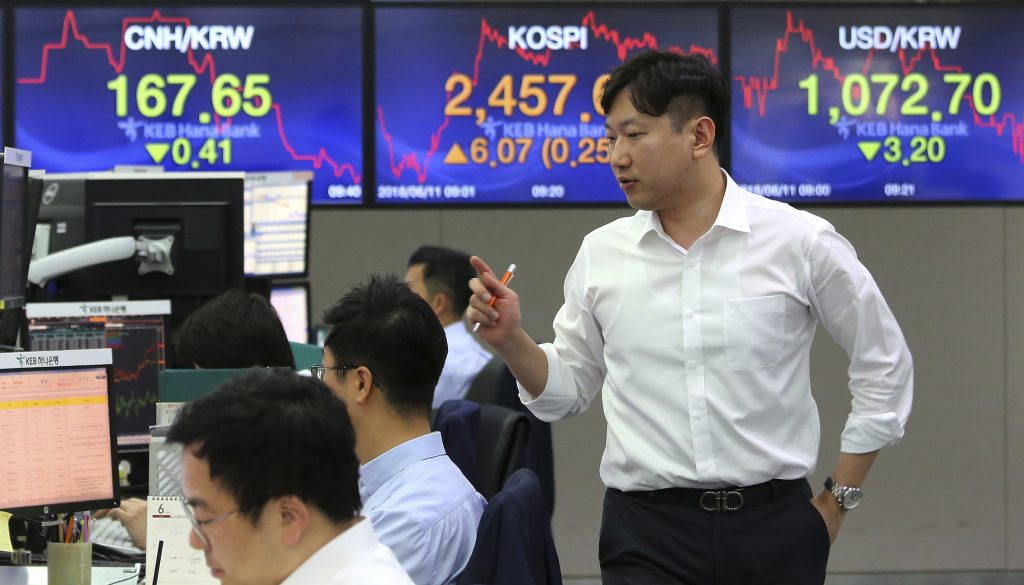 Asia stocks shook off initial modest losses and edged up on Monday ahead of an historic U.S.-North Korea summit that investors hope might pave the way to ending a nuclear stand-off on the Korean Peninsula.

Stocks wobbled in early trade after President Donald Trump raised fresh fears of a global trade war when he backed out of a joint Group of Seven communiqué over the weekend, in a blow to the group’s efforts to show a united front.

“What took place at the G-7 weekend was within the scope of earlier expectations. And while the countries disagreed on trade, they did seem to show a unified front on the North Korean issue, so there is also a positive element from the G7 affecting risk sentiment,” said Masahiro Ichikawa, senior strategist at Sumitomo Mitsui Asset Management.

After the G-7 meeting, the U.S. president withdrew his support for its communiqué and blasted Canadian Prime Minister Justin Trudeau amid a spat over import tariffs.

“Business confidence, and subsequently capital spending, is at risk if this tension continues through the summer,” he said, adding that meetings this week of the U.S. Federal Reserve and the European Central Bank (ECB) will be critical events.

Trump and North Korean leader Kim Jong Un will have an unprecedented meeting on Tuesday in Singapore, possibly laying the groundwork for ending a nuclear stand-off between the old foes.

Some analysts also raised the prospect of international sanctions against North Korea being lifted.

“There are many obstacles that will need to be overcome if a deal between the U.S. and North Korea is to be agreed, not least a lack of trust between the two sides,” Gareth Leather, senior Asia economist at Capital Economics, wrote in a note to clients.

“Nevertheless, the improvement in ties between the U.S. and North Korea has at least made the possibility of a deal, which sees economic sanctions on North Korea being lifted, seem a little less far-fetched.”

Investors also got prepared for a raft of other key events.

The Fed holds a two-day meeting starting on June 12, and it is widely expected to raise interest rates for the second time this year. The focus is on whether the central bank will hint at raising rates a total of four times in 2018.

The ECB meets on June 14, when it could signal intentions to start unwinding its massive bond-purchasing program.

Also, the Bank of Japan on Friday concludes a two-day meeting at which it is widely expected to keep its loose monetary policy intact.

The Canadian dollar, which has been dogged by fears Trump may scrap the North American Free Trade Agreement (NAFTA), fell 0.3 percent to C$1.2967 per dollar.

The euro, which was lifted last week amid the prospect of the ECB signalling its exit from easy policy, was 0.25 percent higher at $1.1797.

The dollar erased earlier losses to trade 0.2 percent higher at 109.80 yen as regional equities gained and the U.S. Treasuries yields rose ahead of a raft of auctions.

The dollar index against a basket of six major currencies was 0.1 percent lower at 93.470.

Bitcoin struggled near two-month lows after South Korean cryptocurrency exchange Coinrail said it was hacked over the weekend, raising concerns about security at small- to mid-sized virtual currency exchanges.