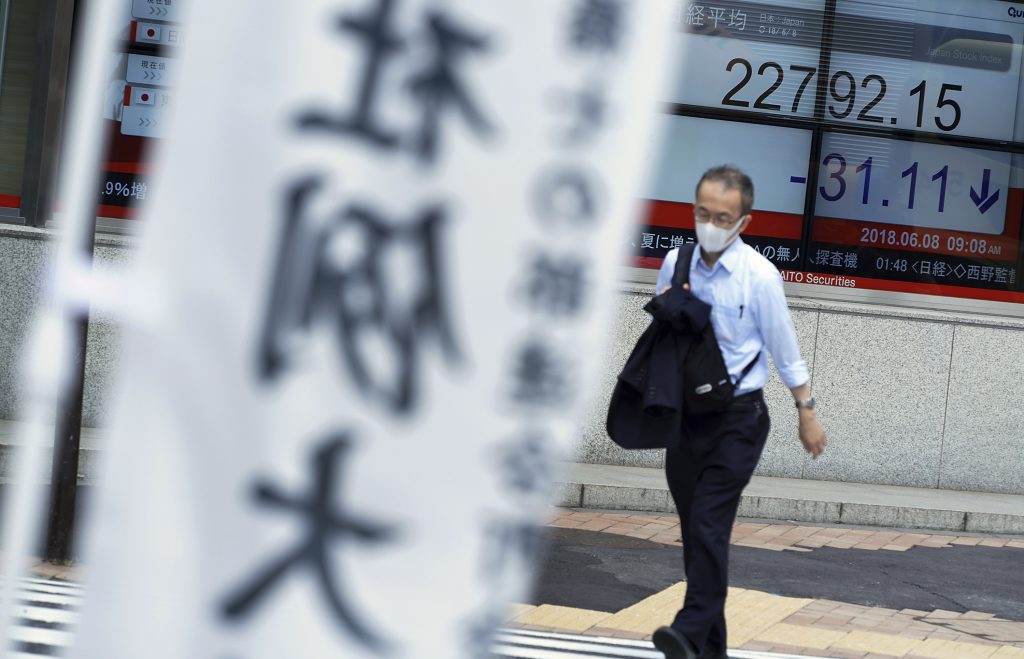 Asian shares retreated from a 2-½-month high on Friday as investors turned away from emerging markets due to uncertainties over global trade relations, and expectations of more U.S. rate hikes and a wind down of a massive monetary stimulus in Europe.

MSCI’s broadest index of Asia-Pacific shares outside Japan fell 1.1 percent after six straight sessions of gains took it to the highest since mid-March. It was still on track for a weekly gain of more than 1 percent.

The S&P 500 and Nasdaq ended lower on Thursday while Treasuries gained.

Spreadbetters expected the weaker tone in equities to carry over into Europe, forecasting a lower open for Britain’s FTSE , Germany’s DAX and France’s CAC.

Its policy-making Federal Open Market Committee (FOMC) holds a two-day meeting starting on June 12 that is is widely expected to result in the second interest rate increase of the year. The focus is on whether the central bank will hint at raising rates a total of four times in 2018.

European Central Bank policymakers meeting on June 14 will debate whether to end bond purchases later this year, the bank’s chief economist said on Wednesday, giving a hawkish message that sent the euro to a three-week top, hit emerging markets, and spurred demand for safe-haven bonds.

“Markets are having to rediscover how to price risk amid reduced central bank buying and that adjustment could prove very hard,” said Matt King, Citi’s global head of credit strategy.

Before those key central bank meetings, markets will have to digest the fallout from this weekend’s Group of Seven summit in Quebec, where the mounting risk of tariff wars between the United States and its major trade partners will be in the spotlight.

“I’m not talking about the rate hike this month, which has already been priced in the market, but the pace of rate increases beyond June. Foreign speculative investors appear to be pulling out of emerging markets, including Latin America and Asia.”

The upcoming, historic U.S.-Korea summit in Singapore on June 12, where the main issue is whether North Korea will abandon its nuclear weapons programme, gave investors another reason for caution.

In emerging market currencies, the South African rand , Brazil’s real and the Mexican peso were the worst hit overnight.

“Risk trades were lower across the board in the currency markets as the yen and Swiss francs appreciated against the greenback and on the crosses. We saw more volatility in the emerging markets,” said Nick Twidale, Sydney-based analyst at Racketing Securities Australia.

The U.S. dollar rebounded 0.2 percent from near three-week lows against a basket of currencies, helped by the strong jobless numbers.

The dollar has come under pressure this week as the euro bounced back from 10-month lows thanks to an ebb in Italian political concerns and speculation that the ECB could signal intentions to start unwinding its bond purchasing program.

On Friday, the euro inched down to $1.1782 after four straight session of gains took it to the highest level since mid-May.

The greenback was little changed against the safe-haven Japanese yen at 109.63, but remained well below a four-month top of 111.39 touched in May.

In commodities, copper came off from a 4-½-year high touched on Wednesday.

Oil prices reversed earlier gains and fell as surging U.S. output as well as signs of weakening demand in China weighed on markets, even though supply woes in Venezuela and OPEC’s ongoing production cuts offered crude some support.