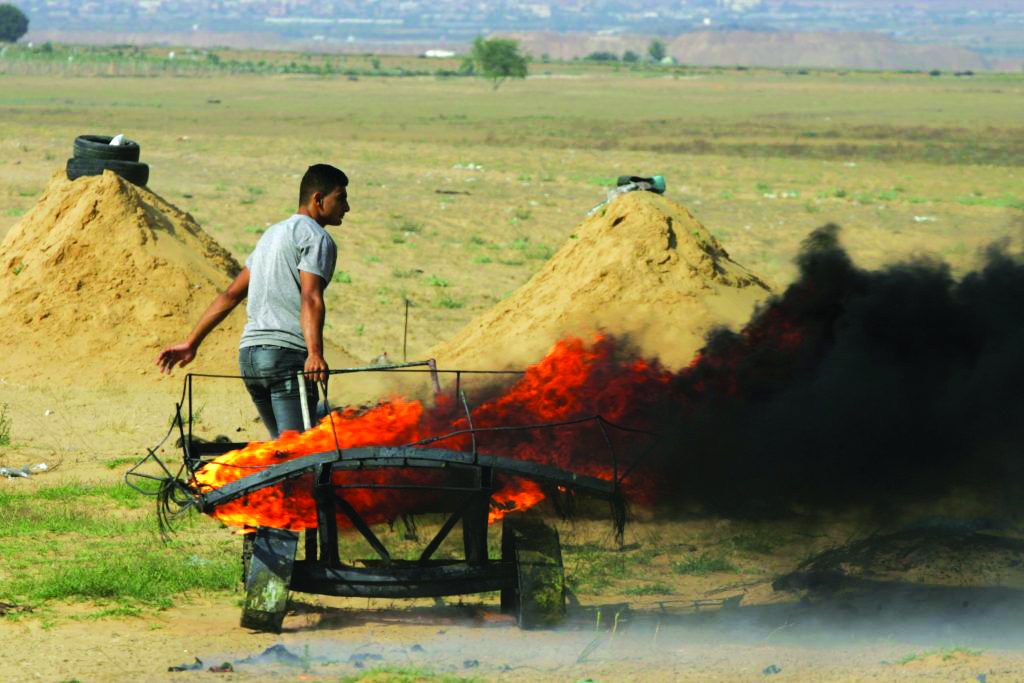 After nearly four years of quiet, which saw unprecedented growth and prosperity for the Jewish communities located in close proximity to the Gaza border, residents of southern Israel are once again on a war footing.

This past week saw nights spent in bomb shelters, and days living in dread of the Red Alert siren signaling the urgent need to reach the nearest shelter. These sirens triggered fear and panic for many, but especially for parents whose children were not nearby.

True, the schools and kindergartens are fortified, but the way to and from the facilities are not. “I don’t understand who guarantees we’ll get to kindergarten safely”, Kibbutz Ein Hashlosha nursery school teacher Smadar Bouaron told Army Radio. “Now I’m supposed to be on my way to work; I don’t know what to do.”

B’chasdei Hashem, most of the nearly 100 rockets and mortars fired from Gaza last week were either shot down by Iron Dome or landed in empty fields. One landed right next to a kindergarten just minutes before the children were to arrive.

But while the number of physical casualties was miraculously low, the number of those suffering invisible injuries, in the form of trauma, is sky-high. “It’s important to me that the world and the people of Israel know what we’re going through,” Sderot resident David Mansour, whose home was hit by bullets, told Arutz Sheva last week. “I tell you that 70 percent of the public is suffering from anxiety; everyone’s getting psychiatric treatment, and there’s no such thing in any country in the world, with children born into this mess.”

In addition, residents of the south live with the fear of tunnels that threaten to open up and swallow them, to be whisked into Gaza as hostages. True, the IDF has made significant progress in combatting the tunnel threat; however, every time a resident hears that a tunnel was destroyed after it crossed into Israel, only a few meters way from his community, he can’t help but feel anxiety over what might have happened if…

Dr. Julia Chaitin, who lives on Kibbutz Urim, explains that the adults force themselves to overcome their fears and anxieties for the sake of the children. “We mustn’t fall apart — the children depend on us,” she told Army Radio. “For the children’s sake, we show them we’re all right, because that’s what sustains them. The problem is that this is an impossible situation.”

Helping the adults deal with this impossible situation are psychologists from the educational services who have fanned out across the area to assist children in distress and their families.

Meanwhile, Jews in Israel’s north, in particular the Golan Heights, live with the knowledge that the tense quiet that prevails there could come to an abrupt end. Every week or so sees an air attack by Israel against Iranian targets in Syria, and it’s only a matter of time before Iran responds. A few weeks ago, Iranian forces based in Syria fired 20 rockets at Israeli front-line military positions in the Golan Heights.

And if rockets do start falling, chalilah, residents of the north don’t have anywhere near the resources that Israelis in the south have. Billions of shekels have been spent in recent years to secure the homes and schools of Gaza-area Jewish communities, while the north has been neglected. Moreover, Iranian rockets are far more accurate and powerful than those in the possession of Hamas, adding to the anxiety of residents in the north.

Sandwiched between the south and the north is the rest of Israel, the majority, who live a different reality, practically a different country. For them, there is no war, baruch Hashem, nor even the fear of war. There is blessed routine. Things are so good that if not for the news reports on what Hamas is planning in Gaza and what Hezbollah and Iran are doing in Syria, it would be possible to imagine that all is well for the Jews of Israel.

But all isn’t well. As long as people in the south and north are in distress, the situation is untenable for everyone. Pressure must come from all quarters for the government to beef up psychological services for residents of the south and north at this stressful time.

People throughout Israel must demand that the tax authorities offer speedy assistance to farmers in the south whose fields, and livelihoods, have been destroyed by incendiary kites launched by Gaza Arabs (over the weekend there were 40 such fires).

They must demand that the government continue to insist that Gaza’s Hamas rulers bring a complete halt to rocket fire, and that the “drip-drip” of recent days, which makes normal life impossible for southern residents, will not be accepted.

Finally, the government must ensure that no humanitarian concessions are made to Gazan residents before the bodies of Israeli soldiers Hadar Goldin and Oron Shaul, Hy”d, are returned to their families.