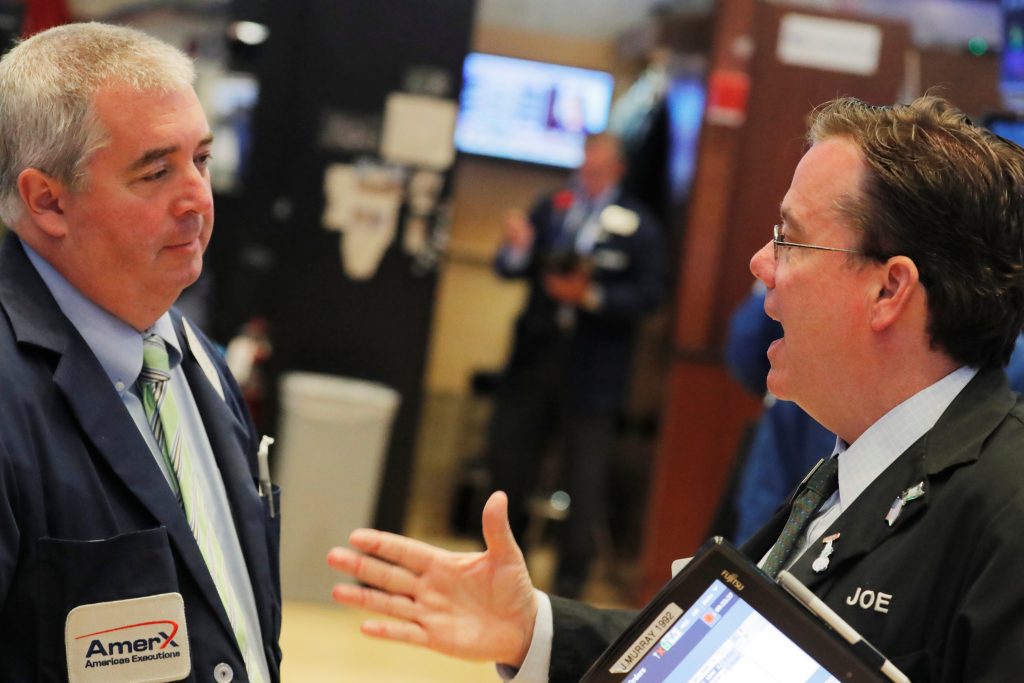 U.S. stocks are rising Monday as technology companies, retailers and household goods companies gain ground. Some of the world’s largest tech companies, including Apple and Microsoft, are leading the way, and the Nasdaq composite is on track for an all-time high. Energy companies are falling, as crude oil prices continue to decline.

KEEPING SCORE: The S&P 500 index climbed 10 points, or 0.4 percent, to 2,745 as of 2:45 p.m. Eastern time. The index rose 1.1 percent Friday after a strong jobs report, and hasn’t made two consecutive gains since mid-May. The Dow Jones Industrial Average rose 153 points, or 0.6 percent, to 24,789 behind gains from aerospace company Boeing, retailers Walmart and Home Depot, and payment processor Visa. The Nasdaq composite gained 42 points, or 0.6 percent, to 7,596. The technology-heavy index made its latest record close on March 12.

The Russell 2000 index of smaller-company stocks was on track to top the records it set last week as it rose 1 point to 1,648.

Microsoft rose 0.7 percent to $101.50 after the company said it will pay $7.5 billion in stock to buy GitHub. Around 27 million software developers around the world use GitHub to share code and build businesses.

Retailers also moved higher. Under Armour rose 5.5 percent to $22.53 and Target gained 5 percent to $76.46, while Walmart picked up 2.7 percent to $85.20 after it agreed to sell an 80-percent stake in its struggling Brazilian business.

SUSTAINED GAINS: Last week the S&P 500 alternated between big gains and losses as Wall Street reacted to political turmoil in Italy and rising trade tensions — as the U.S. continued to hold talks with Chinese officials and placed tariffs on steel and aluminum imported from Europe, Mexico and Canada.

Stocks have wobbled in the last few months, as investors worried that tariffs and other barriers to trade will reduce economic growth and corporate profits. But Wall Street has mostly treated the tough talk and proposed tariffs as a negotiating tactic. Invesco Chief Global Market Strategist Kristina Hooper said the U.S. crossed an important dividing line last week when, after months of talks, its aluminum and steel import duties went into effect.

“Markets seem to treat it as if it’s just rhetoric and it’s just a bargaining tool; and my view is that that is foolhardy,” she said. “We have enough positive economic data, that it’s easy enough to put blinders on when it comes to threats like protectionism.”

FACEBOOK POKED: The New York Times reported Sunday that Facebook struck data-sharing deals with at least 60 device makers, — including Apple and Amazon — as it tried to get its app onto smartphones, and that the device companies were able to access users’ friends without their explicit consent. That renewed some investors’ concerns about Facebook’s handling of user data, and the stock lost 0.4 percent to $193.24.

Ime Archibong, vice president of product partnerships, said in a blog post that Facebook has maintained tight control over the technology, and that it is not aware of any abuse by the companies that it teamed with.

Facebook stock skidded after allegations that a firm linked to the Trump campaign improperly harvested personal data from as many as 87 million Facebook accounts. Wall Street’s concerns about the stock gradually faded; and Facebook closed at an all-time high Friday.

HEALTH CARE: Companies reported results from cancer drug studies at the annual meeting of the American Society of Clinical Oncology. Nektar Therapeutics plunged 42.5 percent to $51.91 after it disclosed data from a potential treatment for pancreatic cancer. Analyst Debjit Chattopadhyay of H.C. Wainwright said investors were concerned by mixed results from the study and a lack of information and a lung cancer drug study.

Nektar had made huge gains since early November. Shares of its partner Bristol-Myers Squibb lost 3.1 percent to $51.51. Merck gained 2.3 percent to $61.98 after it reported encouraging results from studies of lung cancer treatments.