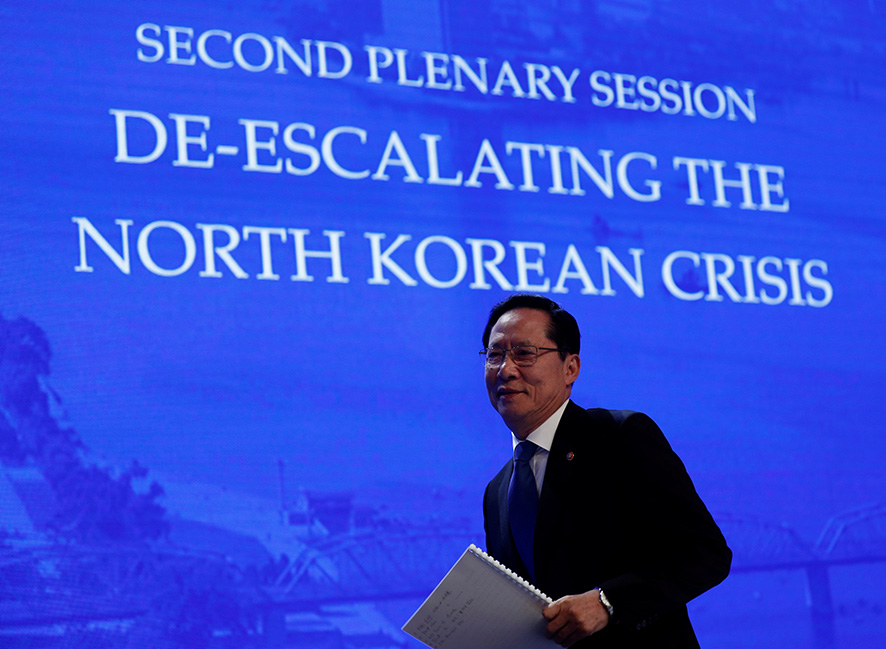 South Korea gave a major sigh of relief Saturday after the White House revived plans for a landmark summit with North Korea that has already stirred new openings between Seoul and Kim Jong Un’s regime.

A statement from South Korea’s presidential Blue House said, “The road to a summit between North Korea and the United States appears to have expanded and strengthened” after a top envoy for Kim held meetings in Washington with President Donald Trump on Friday and hand-delivered a letter from the North Korean leader.

“We will excitedly, but calmly, look forward to their historic meeting in Singapore,” said a spokesman for South Korean President Moon Jae-in.

The South Korean reaction is also notable for what it leaves out. South Korea has been cautious not to set clear expectations for the planned June 12 summit in Singapore between Trump and Kim. There are too many potential pitfalls, chiefly, how far the North is willing to make concessions over its nuclear program in exchange for a possible easing of economic sanctions and other incentives from the United States and its allies, such as South Korea.

Moon has staked his political credibility on being a key broker between Kim and the Trump administration. After Trump said May 24 that he was canceling the summit, the South Korean president’s outreach included a hastily arranged face-to-face meeting with Kim.

In the past few days, envoys from both sides of the divided peninsula have agreed to goodwill gestures. Military talks are planned for June 14 in the truce village of Panmunjom, and discussions on holding reunions for families separated by the Korean War more than 60 years ago are set for June 22 in the North’s Mount Kumgang resort.

At a gathering of defense chiefs in Singapore, South Korea’s defense minister, Song Young-moo, also planned Saturday to emphasize the South’s peace efforts to an audience that included Defense Secretary Jim Mattis and military officials from China, which is deeply involved in North Korea as the country’s chief economic lifeline.

A statement released Saturday by the North Korean state news agency said North Korea will push for all sanctions to be lifted and to “abolish hostile policies” by the United States toward North Korea.

“We must fight against hostile acts by the United States and stop the sanctions the United States is imposing under the disguise of the United Nations, and take immediate steps to reach a peace treaty,” the statement from the Korean Central News Agency said.

“We must end the U.S. intervention and interference on the unification and unity of our people forever,” it said.

Contrasting messages have emerged from the North in recent days amid the scramble to save the summit.

After talks with a South Korean team, the North’s chief negotiator, Ri Son Gwon, described both nations as “the wheels that move the cart forward” toward peace, according to the South’s official Yonhap News Agency. On Thursday, meanwhile, North Korean leader Kim complained to Russia’s foreign minister, Sergey Lavrov, about “U.S. hegemonism” and suggested he wanted to expand ties with Moscow as a buffer against Washington.

Any hints of greater cooperation between Kim’s regime and Moscow could set off alarms in the Trump administration and bring new complications to the planned summit.

On Friday, China welcomed the prospect of greater Russian involvement in North Korea. “It plays an important role in maintaining peace and stability in the region and advocates a peaceful and diplomatic solution of the Korean Peninsula’s nuclear issue,” Chinese Foreign Ministry spokeswoman Hua Chunying told reporters in Beijing.

Joel Wit, who follows North Korean affairs as a senior fellow at the Washington-based Stimson Center, said Pyongyang knows that any economic advances will come mostly from countries in the region rather than from possible U.S. aid or investment if peace efforts move forward.

“That’s the whole game,” Wit said. “North Korea is looking out for its security concerns. This is what it wants from the U.S. It’s not yet about the economy. That will come from the countries like South Korea and China. This summit is mostly about security for the North.”

Mattis, at the Singapore defense conference, said Trump will not discuss any possible reductions in U.S. troop levels in South Korea at the summit with Kim. Mattis said such talks could be held later with South Korea if the summit makes progress, in Washington’s view.

There was no immediate Chinese reaction after the summit plans were back in motion. Beijing has previously signaled, however, that it wanted the summit to go ahead.

Though the official response from China’s Foreign Ministry has been restrained, the Communist Party-controlled press has been critical of the U.S. side for the unpredictability of the past few months – both on trade and North Korea.

“The on-off-on roller coaster has exposed a shocking lack of seriousness and preparedness on the U.S. side, particularly on Trump’s part, as to how to seize such a rare opportunity to ease the tensions on the Korean Peninsula,” wrote Chen Weihua, Washington correspondent for China Daily, in an English-language opinion piece.

Chinese experts remain skeptical that Trump and Kim will reach a sweeping deal by June 12. “The twists and turns over the past week are evidence that these working-level talks aren’t going smoothly,” said Cui Zhiying, a Korean affairs expert at Shanghai’s Tongji University.