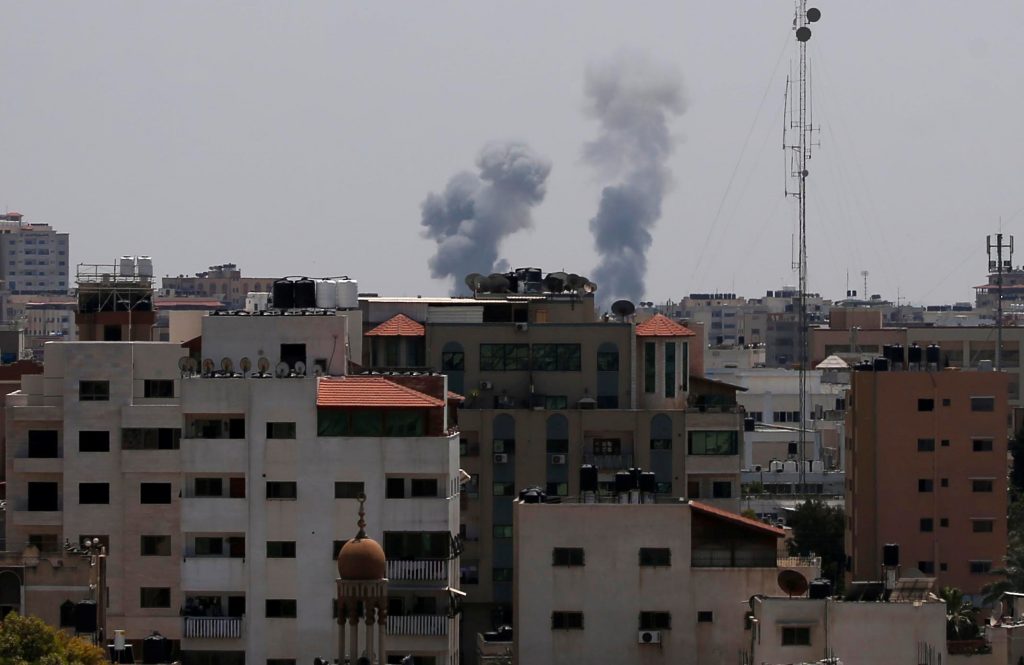 In its summary of this week’s actions in Gaza, the IDF said Thursday that Hamas and other Gaza terror groups had sustained “significant damage” to their terror infrastructure, after Israeli planes hammered terror targets in Gaza earlier in the week. The IDF attacks came after Gaza terrorists fired over 100 missiles at Israeli residential communities on Monday and Tuesday.

The army released aerial photos of some of the targets Thursday, pointing out the specific targets, and showing how they appeared after the attacks compared to how they appeared before. Israeli planes hit some 65 key positions, the IDF said, with significant portions of the military capabilities of Hamas and Islamic Jihad – especially its naval capabilities – badly damaged.

Also badly damaged was the terror group’s rocket-making capability. Several major weapons manufacturing workshops, where missiles were built and assembled, were destroyed, and the Israeli strikes also hit several warehouses where missiles and rockets were stored. The strikes significantly lowered the number of rockets Gaza terror groups have available to fire at Israel, and rebuilding the missile manufacturing infrastructure will require “significant investment,” the army said.

“The attacks on these sites has had a significant impact on the ability of Hamas to act,” the IDF said in its statement. The demolition of the naval infrastructure of the terror groups was especially important, because the groups “used those positions for exercises involving advanced explosives, which were to be used by Hamas and Islamic Jihad naval forces to attack Israel from the sea.”

The setback was especially difficult for the terror groups right now, the IDF said, because by the time the groups were able to recover, an Israeli-built sea blockade would be in place. The blockade is being built out from the Zikim beach in the Gaza border area, very close to the land border with Gaza. It will extend several hundred meters out to sea, and will be built in the style of a wave breaker – but it will be built on three levels, including an underwater blockade and a rock blockade on the surface, which will be topped with a barbed wire fence.

In a statement, IDF Southern Command head Eyal Zamir said that the army had “attacked some very high-value targets that we were waiting for an opportunity to attack for a long time. I believe that we have achieved a significant accomplishment. Of course, the enemy fired many missiles at us, but most of them either fell in open areas or were destroyed by Iron Dome anti-missile systems. I believe that in light of Tuesday’s events, the terror groups will not seek to engage further with us in a wider-range conflict at this time,” he added.