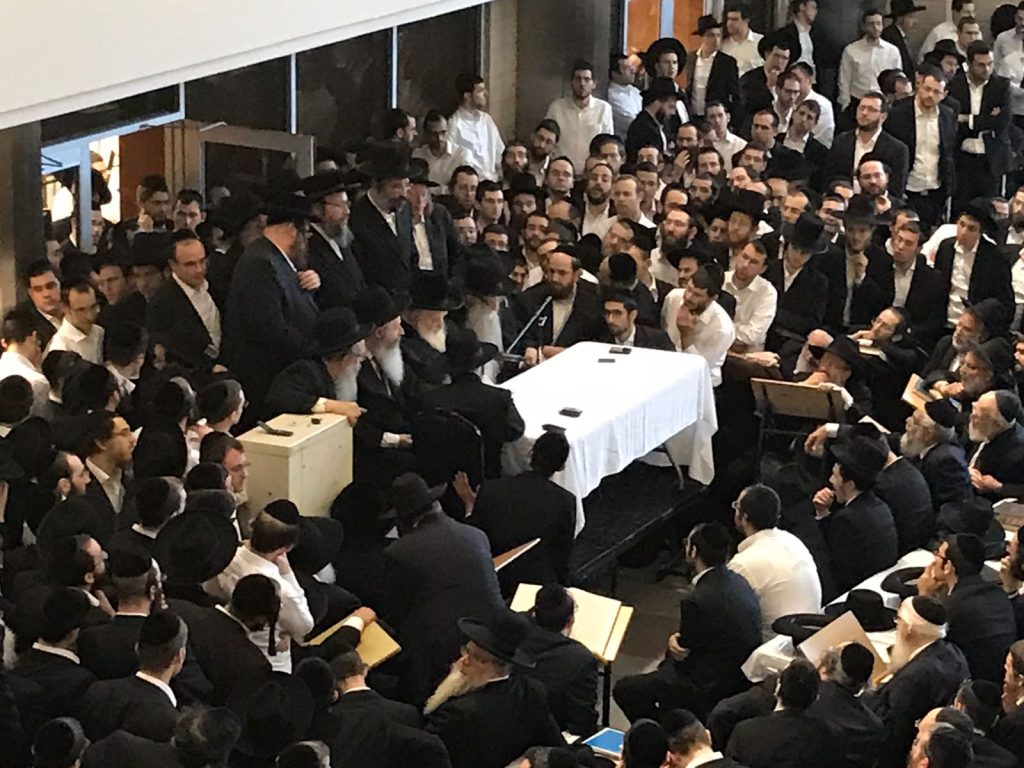 To tunes of “yamim al yamei melech tosif,” crowds of all ages turned out to catch a glance of Harav Moshe Sternbuch, shlita, the Rav and Av Beis Din (Raavad) of the Eidah Hachareidis of Yerushalayim, on his brief visit to Lakewood Thursday afternoon.

At Beth Medrash Gevoha (BMG), thousands crowded into the yeshivah’s largest room to hear the Raavad deliver a shiur in Meseches Shabbos, followed by divrei chizuk.

Later in the afternoon, he was greeted at public kabbalas panim held outside of Yeshivas Ohel Moshe.

Harav Malkiel Kotler, Rosh Yeshivas BMG, quoting the hesped which the Satmar Rebbe, Harav Yoel Teitelbaum, zy”a, delivered in honor of Harav Ahron Kotler, zt”l, said that the Rebbe had praised the Rosh Yeshivah’s adherence to the accolade that Chazal give to Aaron haKohen “sh”lo shinah,” that he did not change, and that the same stubborn adherence to the mesorah of Klal Yisrael could be applied to the city’s honored guest.

“The Raavad upholds the Torah through his harbotzas haTorah, his leadership, and his sefarim without any deviations, in total purity,” he said.

The location of the event held special significance as the yeshivah, Ohel Moshe, is named in honor of Harav Moshe Schneider, zt”l, who led a yeshivah in London where the Raavad learned as a bachur for several, years becoming one of his Rosh Yeshivah’s closest talmidim.

Each speaker made mention of that connection, and the Raavad himself quoted his Rebbi in his brief remarks.

“Rav Moshe Schneider, zt”l, always said that he only wanted bnei Torah in the yeshivah…to him being a ben Torah meant that everything a bachur does is Torah, wherever he goes and whatever he does,” said the Raavad.

The Raavad’s visit has been met with great enthusiasm, as he has not visited America for roughly 20 years and, due to his weakened physical health, he rarely travels abroad.

Among the multitudes who turned out to greet the Raavad were children from local chadarim, and bachurim from nearby yeshivos who had been brought by their rebbeim to see and hear a gadol b’Yisrael who was privileged to absorb the Torah and kedushah of the Brisker Rav, the Chazon Ish and other giants of previous generations. The Raavad seemed to direct several of his comments to the younger members of those gathered at the event.

“A bachur must know the zechus that he has to sit and learn Torah,” he said. “The Torah is sweet and [through learning] one is privileged to sense its sweetness.”