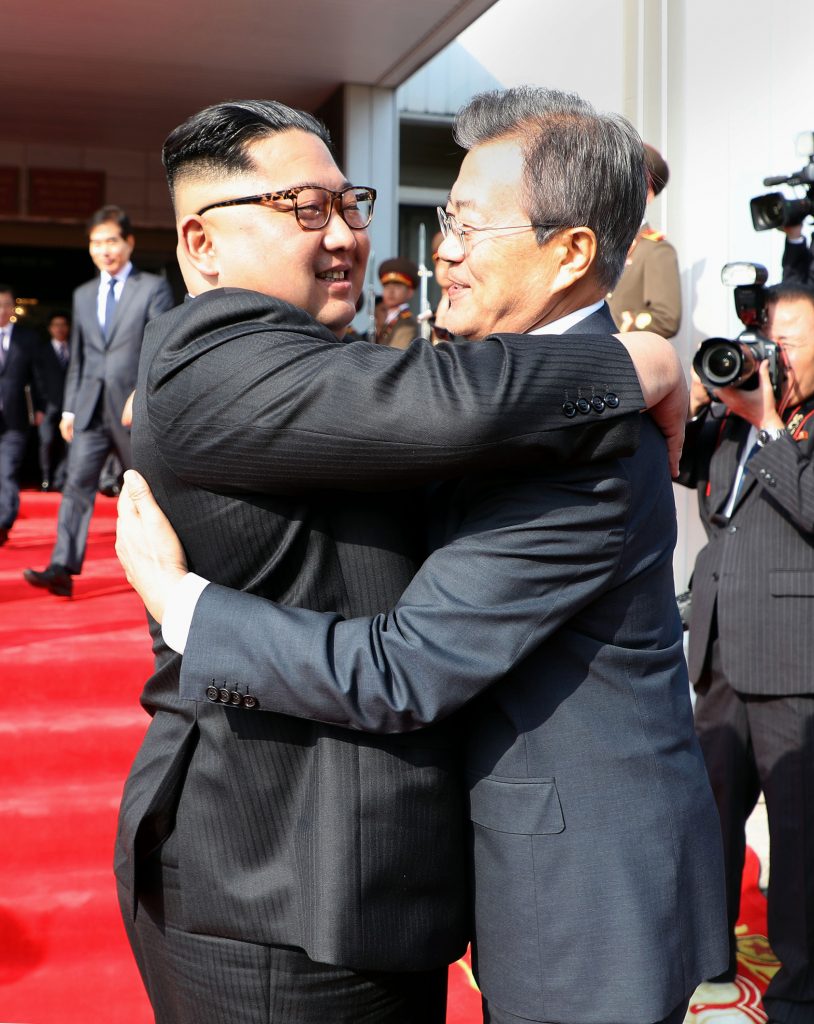 Moments after Kim Jong Un became the first North Korean leader to cross into the south last month, he persuaded his counterpart Moon Jae-in to step back with him across the border.

The message? He’s not just going to roll over and give up his weapons.

That’s becoming ever clearer in the run-up to Kim’s planned meeting with U.S. President Donald Trump in Singapore next month. The on-again, off-again summit remains in doubt as the U.S. tries to figure out what it will take for Kim to trade away his nuclear arsenal.

Discerning the motives of Kim — a 30-something leader often lampooned in the West as an overweight madman with a funny haircut — will be key to understanding what kind of deal is possible. Judging from his public statements and state-run media, at least two things appear evident: He wants a deal to ease sanctions, but he won’t give up his nuclear weapons until he feels safe enough to retain power without them.

“The word that defines Kim Jong Un’s current state is anxiety — fear for both his life and the security of his leadership,” said Youngshik Bong, a researcher at Yonsei University’s Institute for North Korean Studies in Seoul.

“He wants to be the leader of an ordinary country, but the justification of abandoning nuclear weapons and missiles in return for economic prosperity isn’t guaranteed to be welcomed by the entire political elite,” Bong said. “Opponents will be quiet as long as there is a viable inflow of economic prosperity and a sudden improvement of living standards with the lifting of economic sanctions.”

In many ways, the world is just getting to know Kim, presumed to be the third and youngest son of former dictator Kim Jong Il. Prior to his recent outreach, some of the only insight on his personality came from former basketball player Dennis Rodman — who said last year he’s “always calm, he’s always smiling, especially when he’s with family.”

His recent interactions with the outside world — including two meetings each with Chinese President Xi Jinping and South Korea’s Moon — showed another side to the brutal dictator presumed to have killed his family members in a bid to consolidate power. He’s proved to be a skillful diplomat who can use humor, humility and flattery to achieve his goals.

In March, Kim made his first trip overseas, a secretive journey by train to meet Xi in Beijing — repairing ties with North Korea’s largest trading partner. Xi told Kim that China had made a “strategic choice” to have friendly ties with North Korea, and they would “remain unchanged under any circumstances.” The two leaders followed it up with another meeting in early May.

Kim’s two summits with Moon have revealed even more about his personality. In April, when Kim walked into South Korea, both leaders declared “a new era of peace” and sought a formal end to the seven-decade-old Korean War.

On that day, Kim joked that Moon no longer needed to wake up in the middle of the night to deal with missile tests, and mentioned that North Korea’s transportation system “is deficient and you might find it uncomfortable.” He capped the day off with an address to reporters — the first time he has ever spoken live to the world.

Last weekend, Kim abruptly requested a meeting with Moon to discuss relations with the U.S. Afterward, Moon said that Kim was worried about whether he could trust the U.S. to “guarantee the security of his regime after his denuclearization.”

The possibility of getting overthrown is a real worry for Kim. U.S. National Security Adviser John Bolton amplified those concerns by calling on him to give up his nuclear weapons before getting sanctions relief while citing the case of Libyan dictator Moammar Gadhafi, who took that approach before he was killed in an uprising.

North Korean statements vilifying Bolton and Vice President Mike Pence for referencing Libya prompted Trump last week to cancel the planned June 12 summit in Singapore. North Korea then flattered the U.S. president the next day, saying the “Trump formula” might lead to a resolution. Trump has since indicated that the meeting may proceed as scheduled.

While Kim has said he’s open to “complete denuclearization,” the definition of that remains unclear. He may demand that the U.S. remove troops from the Korean Peninsula or American nuclear assets from the region. Trump, for his part, has recently shown more flexibility on how denuclearization would occur.

Kim has been worried about internal threats since he took power in 2011, purging many senior officials including his own uncle. Last year, he had his half-brother Kim Jong Nam killed with a chemical weapon at an airport in Malaysia, according to South Korean authorities, a move that removed one of his last remaining rivals for power in the bloodline.

At the same time, Kim accelerated his quest to obtain the capability to strike the U.S. with a nuclear weapon, testing three intercontinental ballistic missiles capable of reaching the American mainland. Trump responded by tightening international sanctions and threatening to unleash “fire and fury” against his regime.

Just as talk picked up in Washington about a potential “bloody nose” military strike, Kim pulled back. He declared his nuclear program complete and sought to engage with the world.

In a New Year speech, Kim promised that 2018 would be a turning point in improving for North Korea. He said that the “life-threatening sanctions and blockade” had been hard on the country’s 25 million people, whose neighbors in South Korea collectively earn 46 times more than them.

North Korea wasn’t always an international outcast. It was once firmly part of the Soviet bloc, with luxurious embassies in Eastern Europe and frequent interaction with the international community. The country had a per capita gross national product equal to South Korea’s as late as 1976.

Yet central planning took an increasing toll on the economy, along with the collapse of the Soviet Union. A famine killed millions in the 1990s — a time when Kim was off attending school in Switzerland. The United Nations first imposed sanctions on North Korea in 2006 for its nuclear push, and has tightened them ever since.

Once in power, Kim Jong Un moved away from the doctrine of “songun,” or military first, pushed by his father. He quickly adopted a new strategy of “byongjin,” or simultaneously pursuing nuclear weapons and economic growth. He began to visit food-processing plants and farms — he was even photographed hugging people, drawing a distinction from his father.

“It is the party’s firm resolution that we won’t force our people to tighten their belts again,” Kim said in his first speech in April 2012.

Last month, Kim told a ruling-party meeting that North Korea would suspend further tests of atomic weapons or long-range missiles and “concentrate all efforts of the whole party and country on the socialist economic construction.” Posters would soon appear in Pyongyang exhorting the workers to “accelerate the advance of our revolution by channeling all efforts into socialist economic construction!”

“He has his nukes, now he needs economic assistance and development,” said Ralph Cossa, president of Hawaii-based Pacific Forum. “That requires the lifting of sanctions. He also seeks legitimacy, and he is getting that.”

Kim has done certain things to make himself more palatable to the global community. He’s started wearing modern suits, brought his wife to public events and showed up at a South Korean pop concert in Pyongyang.

A meeting with Trump would go a long way to normalizing both himself and his regime. Besides winning some sort of sanctions relief, he would also get the legitimacy that comes from a summit with a sitting U.S. president — a photo opportunity craved by both his father and grandfather that shows North Korea is a country that commands respect from the world’s most powerful nation.

“Kim Jong Un’s top priority is regime survival and he views nuclear weapons as a guarantor of his regime, so he will not trade them away lightly, if at all,” said Kelsey Davenport, director for nonproliferation policy at the Arms Control Association. “With an established nuclear deterrent, Kim has little to lose and everything to gain by coming to the table now.”