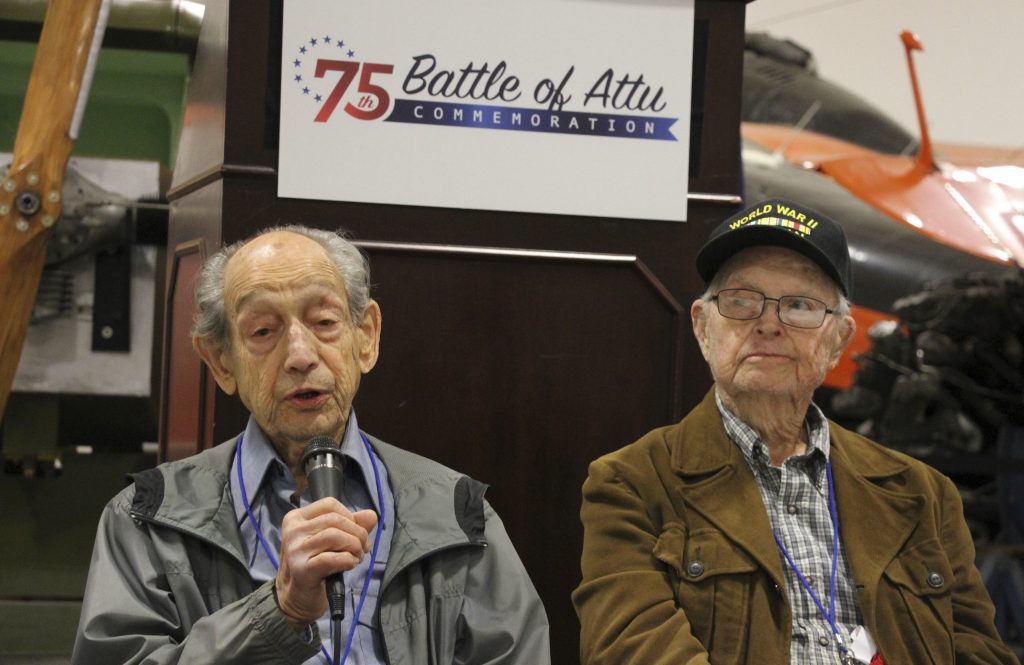 William Roy Dover’s memory of the World War II battle is as sharp as it was 75 years ago, even though it’s been long forgotten by most everyone else.

His first sergeant rousted him from his pup tent around 2 a.m., when word came the Japanese were attacking and had maybe even gotten behind the American front line, on a desolate, unforgiving slab of an occupied island in the North Pacific.

Dover and most of the American soldiers rushed to an embankment on what became known as Engineer Hill, the last gasp of the Japanese during the Battle of Attu, fought 75 years ago this month on Attu Island in Alaska’s Aleutian chain.

“I had two friends that were too slow to get out,” the 95-year-old Alabama farmer recalled. “They both got bayonetted in their pup tents.”

Joseph Sasser, then a skinny 20-year-old from Cartharge, Mississippi, also found himself perched against the berm on Engineer Hill when a captain with a rifle took up a position about 10 feet away.

“I noticed about after 30 minutes or so, he was awfully quiet,” Sasser said. “We checked to see if he had a pulse and if he was alive, and he was not.”

American forces reclaimed remote Attu Island on May 30, 1943, after a 19-day campaign that is known as World War II’s forgotten battle. Much of the fighting was hand-to-hand, waged in dense fog and winds of up to 120 mph.

The battle for the Aleutian island was one of the deadliest in the Pacific in terms of the percentage of troops killed. Nearly all the Japanese forces, estimated at about 2,500 soldiers, died, with only 28 survivors. About 550 or so U.S. soldiers were killed.

American forces, many poorly outfitted for Alaska weather and trained in California for desert combat, recaptured Attu 11 months after the Japanese took it and a nearby island, Kiska. It was the only WWII battle fought on North American soil.

The Japanese staged a last-ditch, desperate offensive May 29 at Engineer Hill.

“Japanese soldiers surprise American forces on Attu with a fanatical charge out of the mountains,” recounts an Associated Press chronology of WWII events in 1943. “Savage fighting rages throughout the day and into the following night.”

About 200 Japanese soldiers died in the assault, and the remaining 500 or so held grenades to their bellies and pulled the pins. It was the first official case of “gyokusai,” a Japanese euphemism for annihilation or mass suicide in the name of Emperor Hirohito, which increasingly occurred in other Japanese battlefields.

Tomimatsu Takahashi told Japanese channel NHK in 2010 he was being treated for a bullet wound when the order for the final charge came. “I was going to die, I thought,” he said.

But as he headed out to fight, he collapsed, likely because he hadn’t eaten in days. He was captured and sent to several mainland POW camps — including in Seattle, San Francisco and Chicago — before he returned home to Japan’s Iwate prefecture in 1947.

His family already had a funeral and grave for him.

After the battle, Dover said things went back to normal for the American soldiers — except one thing: “Somebody had to bury those Japanese.”

During the war, the U.S. Army buried the Japanese soldiers’ bodies with care, built a memorial, set up a grave post and paid respects to the spirits, said Nobuyuki Yamazaki, whose grandfather died on Attu.

Yamazaki was among a delegation of Japanese soldiers’ descendants who attended a 75th anniversary celebration this month in Anchorage. The families have formally petitioned the Japanese government to have the remains returned, Anchorage TV station KTVA reported.

“Japanese people find great comfort when the remains of the Japanese are buried in our homeland,” Yamazaki said.

The Aleut people living on Attu Island also suffered losses, becoming the only North American community to be imprisoned in Japan during the war.

While Kiska was unpopulated, about 45 Aleuts lived on Attu Island. When Japanese forces invaded, the Aleuts were captured and sent to Japan’s Hokkaido Island, where about half died, most from malnutrition or starvation.

The survivors never returned to Attu. The Army said it would be too expensive to rebuild their village, and they were relocated after the war.

The battle over Attu proved to be unimportant to the rest of the war, possibly why it’s forgotten today. However, American planes did use the island to bomb the northernmost reaches of Japan. And author and historian Cloe, who died in 2016, told the AP in 1993 that the Army learned much about amphibious landings and Japanese tactics from the battle.

The U.S. Fish and Wildlife Service now owns Attu Island, which is part of the Alaska Maritime National Wildlife Refuge.

Seventy-five years later, 102-year-old Allan Seroll of Massachusetts, who worked in communications including Morse code for the Army Signal Corps, still carries the burden of the Battle of Attu.

“I wake up in the middle of the night, and I can’t go back to sleep,” Seroll told KTVA. “That’s what this has done to me. That’s how much it affected me and still does.”