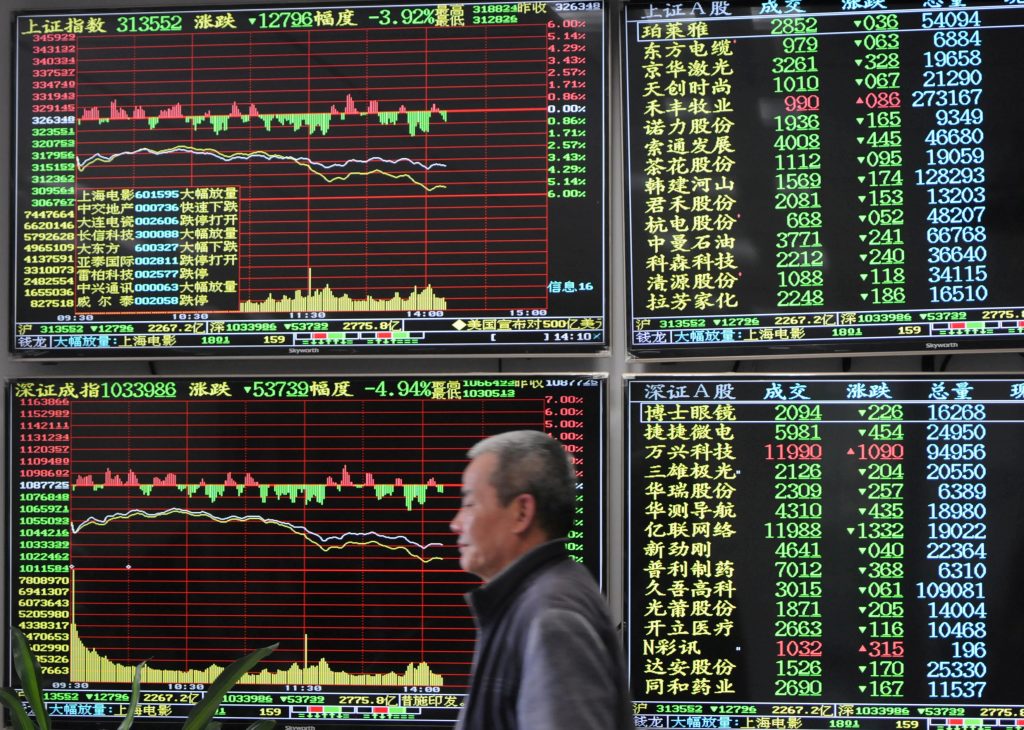 U.S. oil futures sank to six-week lows on Monday on expectations that major producers may raise output, while Asian stocks and U.S. share futures gained on signs the United States and North Korea were still working toward holding a summit.

The euro bounced back from a 6½-month low after the Italian president rejected a euroskeptic as a key economy minister. But his move was seen as triggering a possible constitutional crisis and opening the prospect of fresh elections, keeping the single currency fragile.

A return to the oil production levels that were in place in October 2016, the baseline for the current deal to cut output, is one of the options for easing curbs, Russia’s energy minister said on Saturday.

His comments came after the energy ministers of Russia and Saudi Arabia met to review the terms of global oil supply, ahead of a key OPEC meeting in Vienna next month.

U.S. crude futures dropped to a six-week low of $65.80 per barrel, shedding 3.1 percent and is on course to post its fifth day of decline.

German and French stock futures were up 0.4 percent.

South Korea’s KOSPI rose 0.8 percent, buoyed by stocks which are seen as benefiting from a further thawing in tensions with Pyongyang.

President Donald Trump said on Sunday a U.S. team had arrived in North Korea to prepare for a proposed summit between him and North Korean leader Kim Jong Un, which Trump pulled out of last week before reconsidering.

“While we can’t say for sure how much they can agree, both sides seem to want to make progress,” said Nobuhiko Kuramochi, chief strategist at Mizuho Securities.

Mizuho sees a 10-percent chance that the summit, so far planned on June 12, will not take place, a 20-percent chance of a deal leading to a peace treaty struck at the meeting and a 70-percent likelihood of the summit leading to more talks without producing immediate deals on denuclearization, he said.

Italian president Sergio Mattarella rejected a eurosceptic pick for the key economy ministry by the two antiestablishment parties aiming to form a coalition government, the 5-Star Movement and the League.

While his decision allayed immediate concerns of having a euroskeptic minister in the euro zone’s third-largest economy, his move created bigger uncertainties as 5-Star leader Luigi Di Maio, whose party won the most seats in an inconclusive March 4 vote, demanded that parliament impeach Mattarella.

The 10-year Italian bond yield has risen 67 basis points, or 0.67 percentage point, so far this month, on course to make its biggest monthly rise since late 2011.

Its yield spread over benchmark German Bunds rose above 200 basis points for the first time in over a year.

“If the Italian debt prices fall further, people will have to do more hedging, say by selling the euro and so on. The issue will be the biggest focus for markets this week,”

While no one thinks the country will default, people need to make hedging when they face sharp price moves,” said Takafumi Yamawaki, head of currency and fixed income research at J.P. Morgan Securities in Tokyo.

Investors are also increasingly wary of Spain, where Prime Minister Mariano Rajoy is facing growing pressure to resign over a graft case involving his party.

The spread of the Spanish-German debt yields rose to about 105 basis points, the highest since January.

“The euro is being bought back in the near term but it looks capped at around $1.17. But we haven’t seen the kind of panic we saw before the French presidential election last year. I’d bet the euro will slip gradually than fall sharply,” said Kyosuke Suzuki, director of forex at Societe Generale.

The dollar rose 0.2 percent against the yen in early Monday trade to 109.58 yen, extending its recovery from Thursday’s 108.955 on optimism over the upcoming U.S.-North Korea summit.