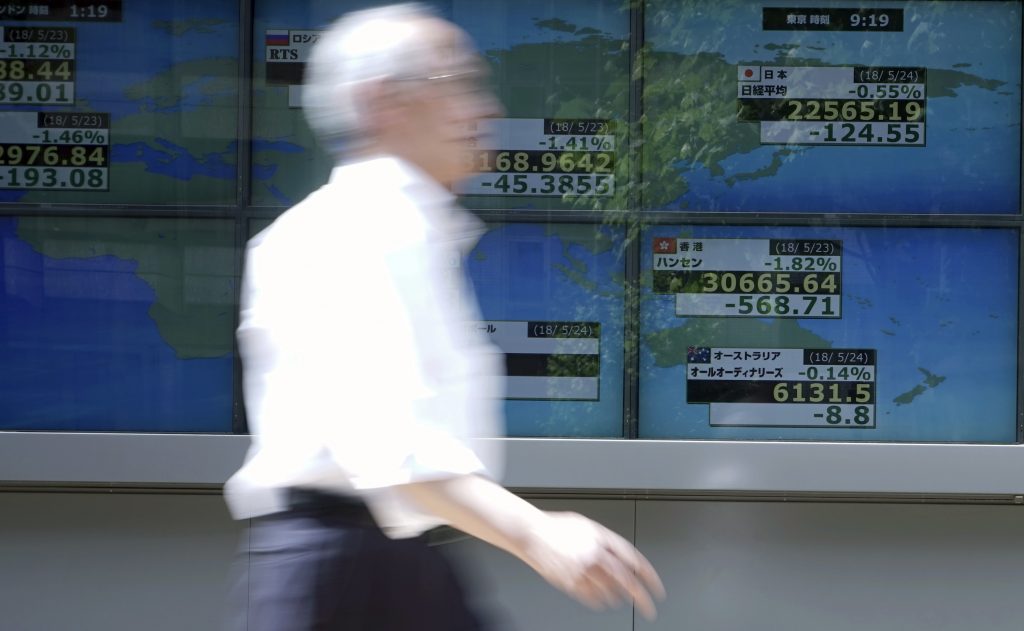 The U.S. Commerce Department said on Wednesday that it would launch a national security investigation into car and truck imports under Section 232 of the Trade Expansion Act of 1962, a move that could lead to tariffs like those imposed on steel and aluminium in March.

Adding to market jitters, Trump on Wednesday called for “a different structure” in any trade deal with China, fueling uncertainty over the negotiations.

On Thursday, China’s Commerce Ministry said it had not pledged to cut China’s trade surplus with the U.S. by “a certain figure,” and that it hoped the United States implemented measures promised during trade negotiations as soon as possible.

It also said it “opposes the abuse of national security clauses,” referring to the U.S. Commerce Department’s probe into auto imports.

Prompting further uncertainty, Trump on Wednesday cast doubt on plans for an unprecedented summit with North Korean leader Kim Jong Un, saying he would know next week whether the meeting would take place.

“There’s a lot of noise around Donald Trump, China-U.S. trade, the auto imports now, and then the Korean summit, and all these things are just weighing on investors at the moment,” said Shane Oliver, chief economist and head of investment strategy at AMP Capital in Sydney.

“I think we probably would have seen a decent day in Asian markets were it not for these ongoing geopolitical worries because the minutes from the Fed’s last meeting were relatively benign.”

While the minutes from the Federal Reserve’s May 1-2 meeting indicated that policymakers expect another interest rate increase would be warranted “soon” if the U.S. economic outlook remains intact, they helped to ease market concerns that the Fed would accelerate the pace of interest rate increases.

The two-year Treasury note yield, which rises with traders’ expectations of higher Fed fund rates, was at 2.5202 percent after touching 2.5970 on Wednesday.

The yield on benchmark 10-year Treasury notes was at 3.0008 percent after earlier falling to 2.9770 percent.

Analysts said that market uncertainty was prompting a clear flight to safety across financial markets.

“With Trump’s unpredictable behavior leaving investors on edge, the Japanese yen has scope to appreciate further in the short term,” said Lukman Otunuga, an analyst at FXTM. “However, a strengthening dollar on the back of heightened U.S. rate hike expectations could limit the yen’s upside gains.”

Confidence among Japanese manufacturers saw its first rise in fourth months, and service-sector sentiment rose to a record high in the latest Reuters Tankan poll, underscoring expectations that the Japanese economy will return to growth in the second quarter.

In South Korea, Finance Minister Kim Dong-yeon said the economy is on track for annual growth of 3 percent despite worrying factors such as high youth unemployment.

The Bank of Korea held interest rates steady for a sixth straight month on Thursday, with inflation seen remaining below target and amid concerns a U.S.-China trade war would hurt regional economies.

In commodities markets, U.S. crude was down 0.3 percent at $71.63 a barrel. Oil prices fell on Wednesday after an unexpected rise in U.S. crude and gasoline inventories.

Brent futures were 0.4 percent lower at $79.50 a barrel, continuing to move lower after rising above $80 last week for the first time since November 2014 .

The most-traded iron ore futures contract on the Dalian Commodity Exchange rose for the first time in six sessions on Thursday, gaining 1 percent.