Business AUTO REVIEW: Like Many of Its Buyers, the 2019 Toyota Avalon Looks to Recapture Youth
Business 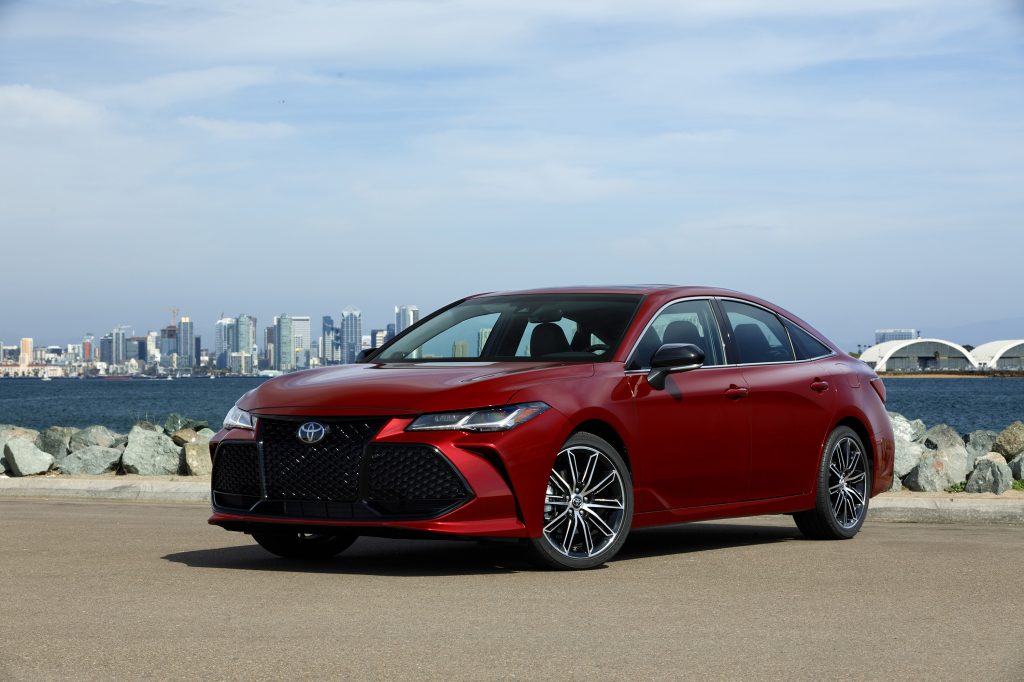 And so it’s the job of automakers like Toyota to appease them by marketing geezer pleasers with a scintilla of youthfulness, vehicles such as the redesigned 2019 Toyota Avalon. And while a more youthful Avalon might seem like selling prune juice as a sport drink, the new Avalon is far more adept than the sedate model it replaces.

Is this a comment on the average Avalon buyer?

Perhaps. Large cars like the Avalon accounted for 392,200 units in 2017, down 11.2 percent from 2016. That’s not many considering that Toyota sold nearly 430,000 RAV4s and 380,000 Camrys last year. Left unsaid is that most large cars are only slightly bigger than midsize models, and many Detroit competitors designs that are older than dirt. That’s not the case with the thoroughly modern Avalon, now built on Toyota’s newest platform and wearing a tamer version of the vigorously sinister styling first seen on the Toyota Prius and Camry, but with far more refinement.

Check out its mug and you’ll find out whether the Avalon is mild or wild. Sportier XSE and Touring trim grades get a black honeycomb insert, while luxury-oriented XLE and Limited trims wear horizontal bars. All Avalons wear softer side sculpting accented by character lines, LED lighting, sequential turn signals and cornering lamps. Its more energetic look is a far cry from its dowdy predecessors.

Inside, modern yet eloquent design is offset by the latest technology.

The center console has the appearance of floating and provides a strong vertical contrast to the horizontal instrument panel. A large infotainment screen with good resolution tops the center stack, and features large on-screen controls that are easy to operate. That said, lower trim levels lack the embedded navigation system found on higher trim models. Instead, Toyota has you use the Scout app routed through your smartphone. The system offers Apple CarPlay and Amazon Alexa, a feature not found on the majority of Toyotas. I suppose age has its privileges.

The top-of-the-line Touring model is nursing-home quiet thanks to a noise cancellation feature that allows you to fully experience the optional JBL audio system, even though the audio lacks midrange. But it’s better than the base audio system, which sounds disappointingly muffled. Then again, the base XLE model it comes in is markedly noisier, so you might not notice anyway.

The new Avalon is two inches longer, nearly an inch wider, and one inch lower than the vehicle it replaces, so it’s not surprising that the seating position is low, and that the front seats aren’t as wide as you’d expect. Still, it’s roomy enough for most. Legroom in the back is generous, although Toyota’s efforts at keeping a low roof line renders headroom merely adequate. The side glass angles up and in, lending a claustrophobic feel to an otherwise roomy cabin.

Toyota’s familiar 3.5-liter, double-overhead cam, 24-valve six-cylinder engine and eight-speed automatic transmission will power most Avalons. Rated at 301 horsepower and 267 pound-feet of torque, it provides the brisk acceleration one expects. The Touring model features Eco, Normal, Sport and Sport+ driving modes to mixed results. Sport+ returns a taut, jiggly, unsettled ride; you’ll feel every ripple in pavement. In contrast, Normal makes the car feel under-suspended, bringing out more body motions but not feeling much more comfortable than Sport+. The Sport mode seems just right, ably absorbing road irregularities without passing on discomfort to the cabin with the car remaining stable and flat during cornering. Steering is quick enough and nicely weighted, although it lacks road feel and the steering wheel’s multiple textures are annoying.

There’s also a hybrid model powered by a 2.5-liter four-cylinder engine and dual electric motors. Horsepower is rated at 215, and fuel economy is rated at 44 mpg. While that’s stellar for a large sedan, the driveline’s smooth demeanor seems well suited to this car’s station.

Not surprisingly, the premium Limited and XLE trims are the true essence of Avalon. Unlike the sporty XSE and Touring models – not to mention aging Boomers, these trims don’t try to be something they’re not. The ride is compliant and comfortable without excess body motion. Body lean is well managed through corners, although it’s athletic, not sporty.

Still, the 2019 Avalon’s more youthful styling, updated technology and increased horsepower make for a more pleasing driving experience, one that might draw interest of younger buyers, or those posing as one.