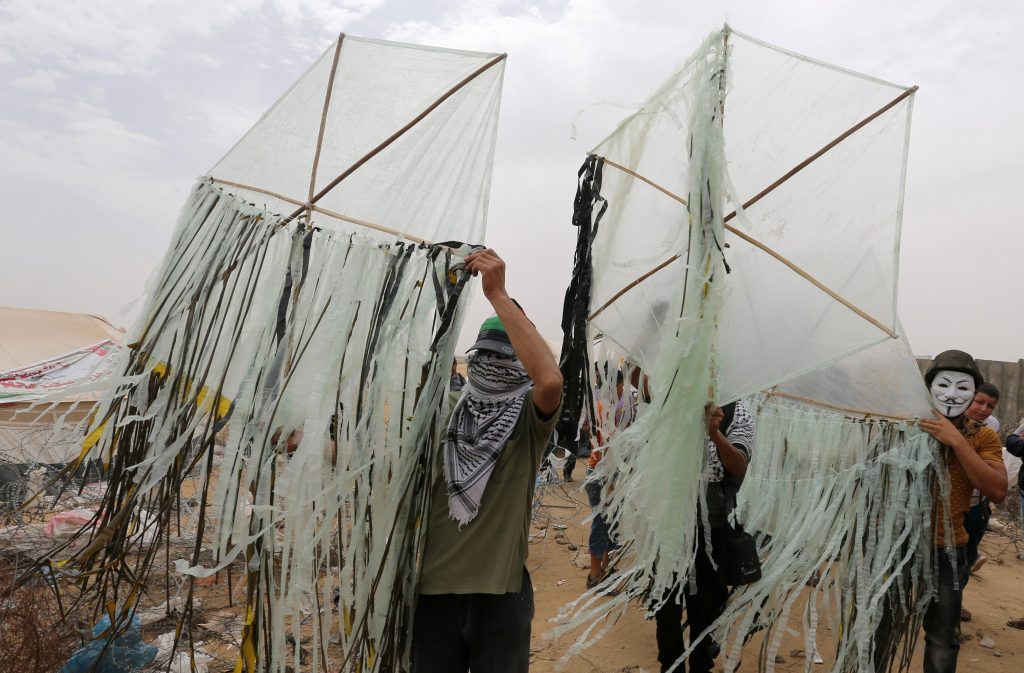 The IDF is changing its standing orders on how soldiers should handle “kite terrorists” in Gaza, Walla News reported Thursday. The new policy, which will allow soldiers to open fire on individuals with kites or balloons that appear to be flying them in the direction of Israel, will go into effect Friday, in time for another round of rioting organized by Hamas in preparation for the “March of Return,” set for next week.

In the past month there have been dozens of fires set along the Gaza border, caused by the incendiary devices Hamas terrorists float over the border fence via kite or balloon. Until now, the IDF has held off on opening fire on those terrorists, but with the orders now changed, the army can use rubber bullets or even live fire to prevent the flying of the devices by terrorists. On Thursday, terrorists flew a kite into the Kerem Shalom crossing, starting a fire when the device attached to it exploded. Staff were able to bring the fire under control without incident.

The IDF is preparing for yet another Friday of mass rioting on the Gaza border, as the date for the “ultimate march,” consisting of tens of thousands of Gazans attempting to break through the border fence and invade Israel, draws closer. Hamas has been promoting the Friday riots at the border over the past several weeks as a preparation for the May 15th “Nakba Homecoming March,” and Israeli security forces are preparing for what could be a “dress rehearsal” for that event throughout the day.

Over the past few weeks, Hamas has unveiled a number of strategies it plans to use to break through the fence, including burning tires to create smoke screens for terrorist activities, mass piling onto portions of the fence and attempting to dismantle them, and the use of kites to deliver firebombs and other flammable material to the Israeli side of the fence in order to burn forests and farms.

The IDF has declared the area within 300 meters of the border fence on the Gaza side as a closed military area, and has been using anti-riot measures to keep rioters away from the area.