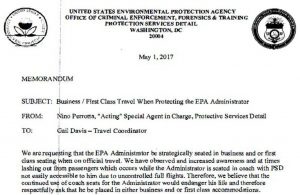 The memo is just 87 words. But in that single paragraph, dated May 1, 2017, the head of Scott Pruitt’s personal security detail made the argument that would underpin dozens of taxpayer-funded, first-class flights for the Environmental Protection Agency administrator in the months that followed.

In the memo, obtained by The Washington Post under a public-records request, Pasquale “Nino” Perrotta wrote that Pruitt was being recognized more often in public and that those guarding him had noticed “at times lashing out from passengers which occurs while the Administrator is seated in coach with [his personal security detail] not easily accessible to him due to uncontrolled full flights.”

As a result, Perrotta wanted a way to better control the environment around the controversial EPA chief.

“We believe that the continued use of coach seats for the Administrator would endanger his life,” he wrote, “and therefore respectfully ask that he be placed in either business or first-class accommodations.”

Agency officials approved the request, and Pruitt soon began racking up hefty travel expenses. A $7,003.52 ticket to Italy. A $16,217 flight to Morocco. A $1,641.43 first-class seat for the short flight from Washington, D.C., to New York City for two media appearances.

In a two-day period last July, for example, Pruitt spent $4,443 for separate round-trips to Birmingham and Atlanta and visits that included tours of a power plant and farm. On at least four occasions, he spent between $2,000 and $2,600 on first-class airfare to official meetings or tours near Tulsa, Oklahoma, where he lives.

The EPA has maintained that Pruitt has faced a greater number of security threats compared to his predecessors, though some lawmakers have questioned the reasoning behind the administrator’s first-class travel and his round-the-clock security detail.

Henry Barnet, who directs the EPA’s Office of Criminal Enforcement, Forensics and Training, told The Washington Post in February that the decision to request premium-level travel for Pruitt was an attempt to create “a buffer” between him and the public. He cited a specific incident in which a fellow traveler approached Pruitt “with threatening language” that was “vulgar,” adding that security officials “felt they could not protect him appropriately, based on the amount of times he was being recognized and the way that some members of the public were acting toward him in a threatening manner.”

Perrotta, who retired from the EPA last week, has been on Capitol Hill answering questions from congressional investigators. On Monday, he defended last May’s special travel request in an interview with the Daily Caller.

“When I supported the shift, there were instances that were very disturbing to me,” Perrotta said, detailing a number of instances in which people threatened Pruitt, either on social media or in voice mails. “Those particular examples – you don’t need many of them to realize there are people out there that want to cause harm.”

Documents released Monday to The Post, The New York Times and BuzzFeed in response to public records requests show that the EPA was working on 33 threat investigations as of mid-March. Ten of those in fiscal 2018 involved Pruitt, the documents show.

The documents include incident reports about the threats Pruitt faced, some of them sent via Twitter, emails, postcards and phone calls. Investigators looked into threats involving a range of people in an array of states, at times recommending criminal prosecution of those involved – though federal prosecutors often declined to move forward with charges.

In one instance in January, according to the records, a person in Arkansas, who claimed to be 85 years old, wrote an expletive-filled letter on the back of paperwork from the Department of Veterans Affairs. The person mentioned Pruitt’s comments on global warming and said of the EPA chief, “[I] hope you & your kind die of cancer of the guts, slowly in agony.”What exactly investigators found was unclear, but they concluded the case should be “closed without further action.”

In another case last year, according to the documents, an unidentified person who sent a “potentially threatening postcard” to Pruitt received a visit from investigators. During that visit, the person was “wearing two handguns on [his or her] waist,” but “expressed regret and apologized for sending the postcard.” Federal prosecutors declined to file charges.

After The Post first reported the extent of Pruitt’s first-class travels in February, the administrator canceled a planned trip to Israel and later said he had instructed his security detail to find ways for him to fly in coach whenever possible.

Pruitt’s travel practices have been a key focus of the numerous inquiries he currently faces – probes that span Congress, the White House and the EPA’s inspector general. The investigations include his spending habits, living arrangements and management of the agency.

The travel memo is among the documents the EPA has turned over recently at the request of House Oversight Chairman Trey Gowdy (R-S.C.).

“We are working diligently with Chairman Gowdy and are in full cooperation in providing the Committee with the necessary documents, travel vouchers, receipts and witnesses to his inquiries,” EPA spokesman Jahan Wilcox said in a statement on Monday.