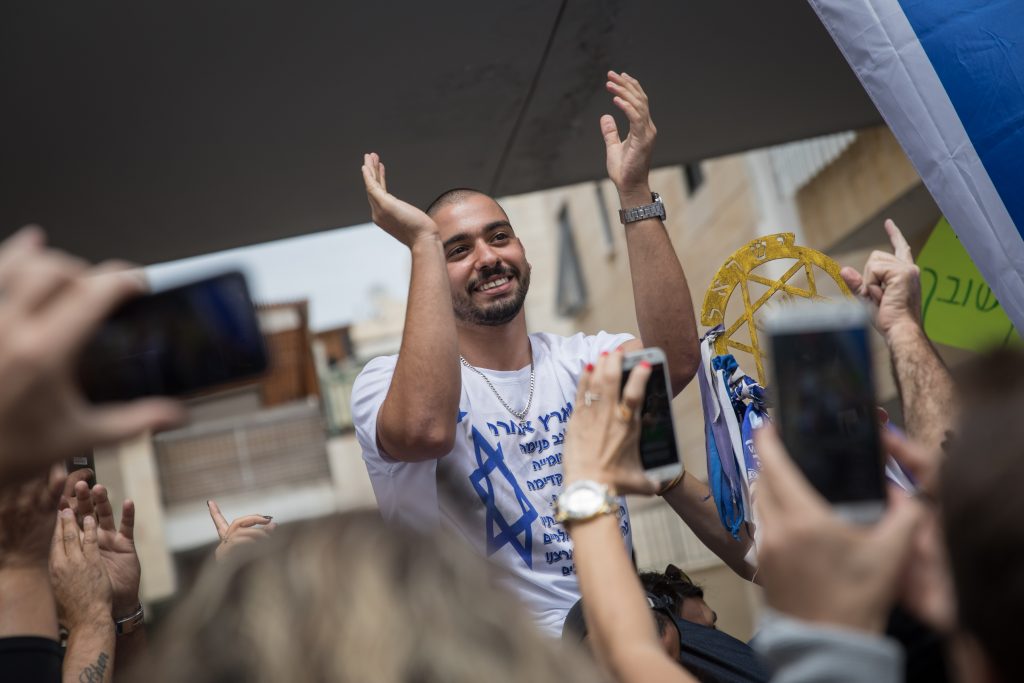 Elor Azaria was welcomed home by family and supporters on Tuesday, upon his release after serving 9 months of an 18-month sentence for manslaughter, in the killing of a Palestinian terrorist who had already been neutralized.

Azaria was given a hero’s welcome by a small group of family and supporters, paraded through the streets of his hometown Ramla in a convoy of cars and motorcycles. A sign outside Azaria’s home read, “Welcome back, Elor the hero.”

Azaria was released two days ahead of schedule from Tzrifim military prison to allow him to attend his brother’s wedding on Wednesday.

“Today we’re celebrating. We’ll continue to rejoice. There will be a time and place to say what we have to say.”

Azaria did not make a speech, but smiled broadly during the welcome home.

IDF chief of staff Gadi Eisenkot later reduced the term by four months, and in March, a parole board ordered a further cut, to a total of nine months.

Azaria became a cause célèbre on the right, where it was widely believed that even if the young soldier (19 at the time) had made a mistake, it was in the line of duty and he should be released without trial, as in similar cases in the past. On his conviction, there were calls for clemency; and on his release Tuesday, there was a call to wipe Azaria’s record clean.

Saying that she was speaking on behalf of other government officials as well, Culture Minister Miri Regev (Likud) said that she would work to erase the conviction from his record.

Prime Minister Netanyahu, who had called for the former soldier to receive a presidential pardon, told reporters he was “happy that the affair is over.”

To be sure, not everyone was pleased with the outcome.

The author of the IDF Ethics Code, Professor Asa Kasher, said on Army Radio that the celebration was a “disgrace.”

“This is someone who knowingly killed and did not even express one word of remorse, and did not show, even a bit, allegiance to the values of the IDF,” Kasher said.

“Yes, the terrorist was an enemy, but soldiers are required to treat a terrorist wielding a knife as a criminal, not as an enemy in a battlefield. The terrorist’s attempt to kill or injure ought to be foiled; but killing him is sanctioned only if there is no effective alternative — only if it’s a last resort,” whereas Azaria shot him after he was lying on the ground and posed no further harm.

Azaria and his defense attorneys maintained that the soldier believed at the time that he was in fact still a threat, and responded accordingly.