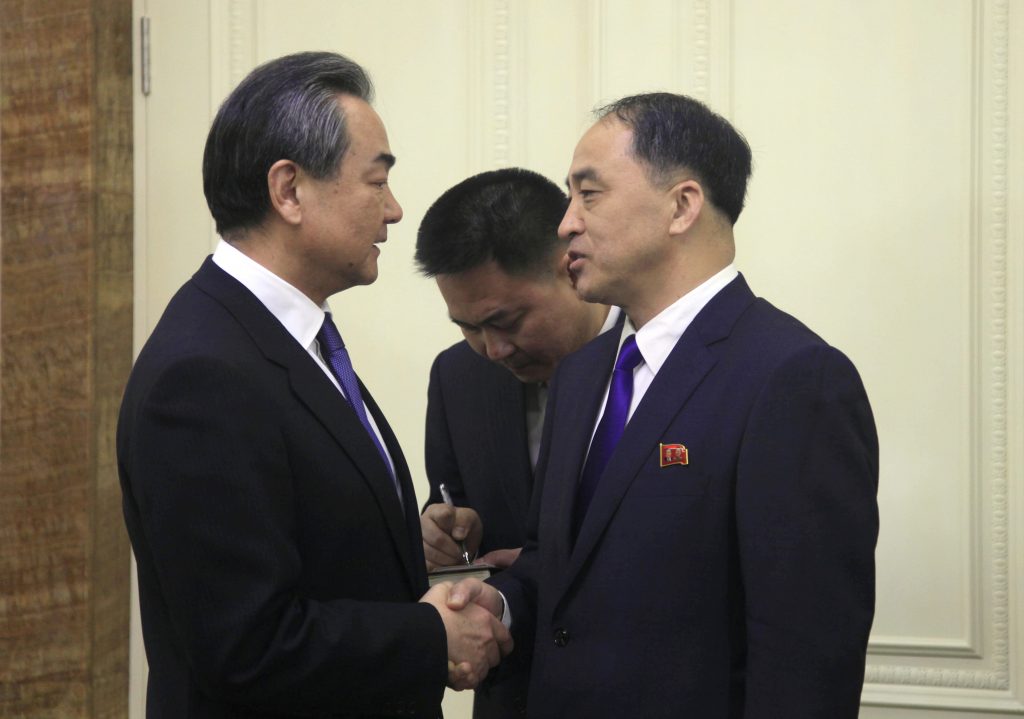 China’s foreign minister arrived in North Korea’s capital on Wednesday and could meet with leader Kim Jong Un while trying to ensure a larger role for Beijing in the new round of nuclear diplomacy with Pyongyang that had been driven by Seoul and Washington.

Wang Yi’s visit came days after Kim and South Korean President Moon Jae-in vowed to work toward the “complete denuclearization” of the Korean Peninsula, though they did not mention specific plans or timetables.

They also agreed to work toward formally ending the 1950-53 Korean War and push for three-way talks with Washington or four-way talks that also include Beijing. The Koreas can’t officially end the war themselves because South Korea wasn’t a direct signatory to the armistice that stopped the fighting but left the peninsula technically in a state of war.

More substantial discussions on the North’s denuclearization — including what, when and how it would occur — are expected between Kim and President Donald Trump, who could meet in May or June. The North’s state-media have not yet commented on Wang’s arrival in Pyongyang.

Wang is likely to use his visit to further ensure that Beijing would not be sidelined in the high-stakes discussions surrounding the North. Some South Korean analysts believe Wang would specifically seek Kim’s commitment that the process on formally ending the war would include China.

The meeting between Kim and Moon at the border truce village of Panmunjom on Friday came a month after Kim made a surprise visit to Beijing and met with Chinese President Xi Jinping. Kim’s Beijing visit was widely seen as a move to strengthen his leverage ahead of his talks with Trump by re-introducing China as a major player in the global diplomatic push to resolve the nuclear standoff.

Analysts say Kim would have asked China, North Korea’s only major ally and main economic lifeline, to soften its enforcement of sanctions aimed at the North. Kim also may have sought Chinese commitments to strongly oppose any military measure the United States might take should his talks with Trump fall apart and the North starts testing missiles again.

While the Kim-Trump talks is shaping up to be crucial, there’s still widespread doubt whether Kim will ever agree to entirely abandon his nuclear weapons when he apparently sees them as providing his only guarantee of survival in a region surrounded by enemies.

Seoul has said Kim expressed genuine interest in dealing away his nuclear weapons. But North Korea for decades has been pushing a concept of “denuclearization” that bears no resemblance to the American definition, vowing to pursue nuclear development unless Washington removes its troops and the nuclear umbrella defending South Korea and Japan.

Kim’s move to re-insert China as a major player in the process has been seen as a sign that the North’s traditional stance essentially remains. Beijing has been calling for a “dual suspension” — of the North’s nuclear and missile activities and of the large-scale military exercises between the U.S. and South Korea.