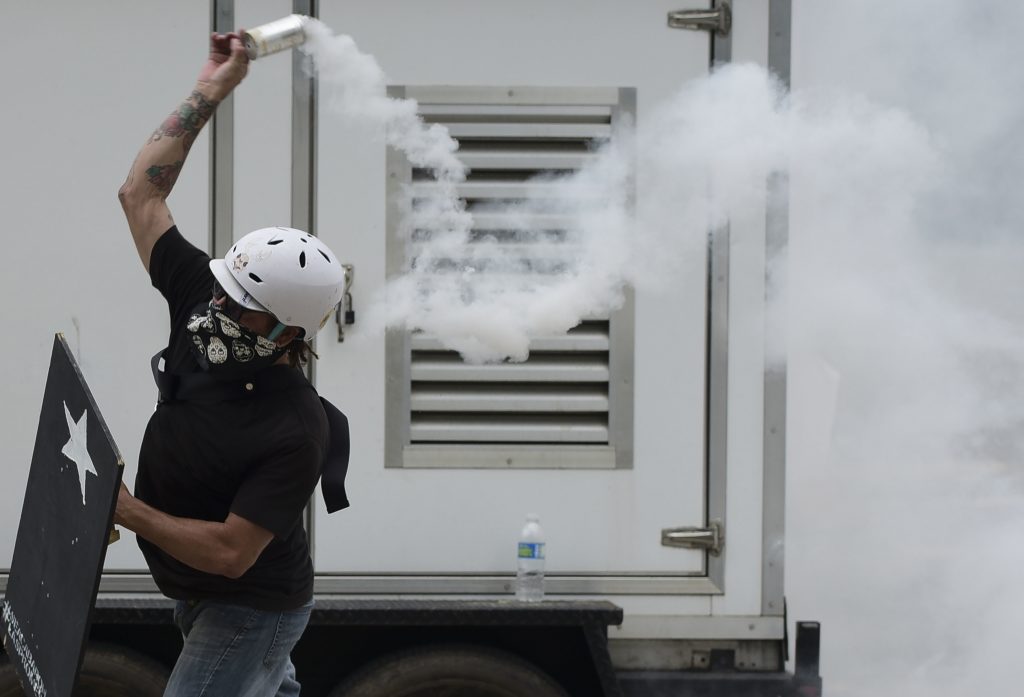 The May Day protest attracted teachers, retirees and unionized workers from both the private and public sector, as well as the mayor of the capital of San Juan, Carmen Yulin Cruz. Among those who marched through the city’s financial center was 56-year-old Juan de Dios del Valle, a government worker who was laid off in 2008 and has only found occasional jobs as a gardener or janitor.

“I’m here to support all those who are mired in poverty,” he said.

The protest remained peaceful until hundreds of young protesters, many with their faces covered, clashed with police who fired tear gas to disperse the crowd. Several injuries were reported as clouds of white smoke billowed through the district of Hato Rey, where many banks and financial institutions are located.

Concerns that the May 1 protest could grow violent forced the island’s biggest mall to close for the day, along with several banks, government agencies and schools.

The march comes as Puerto Rico tries to emerge from an 11-year recession and restructure a portion of its $72 billion public debt load while recovering from Hurricane Maria. The Category 4 storm caused more than an estimated $100 million in damage, and some 30,000 power customers remain in the dark almost eight months since the storm hit.

Economists warn that the poverty rate on the island of 3.3 million people could increase from 45 percent to more than 60 percent. Meanwhile, a federal control board overseeing the island’s finances approved several austerity measures in late April that Gov. Ricardo Rossello has refused to implement. These include a 10 percent cut to a public pension system facing nearly $50 billion in liabilities.

Those pension cuts are one of the main reasons that Ramon Caban, a 60-year-old retired worker from Puerto Rico’s power company, decided to join the march.

“It will be unbearable,” he said. “The future of Puerto Rico is extremely unstable. It’s exasperating because nobody can make plans for the future.”