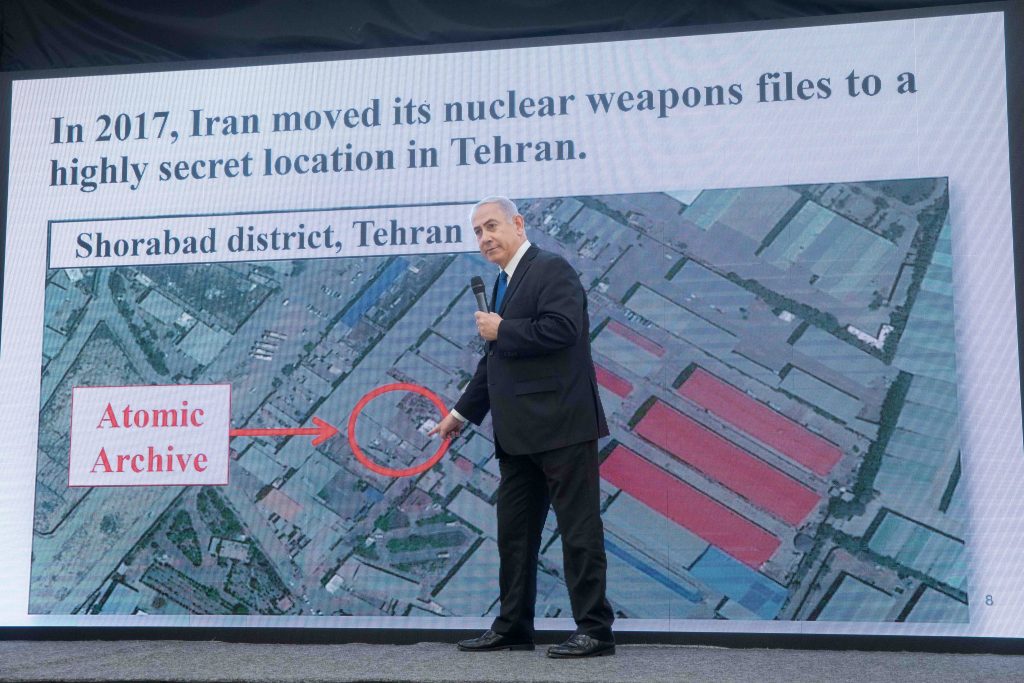 Mossad agents located Iran’s Nuclear Archive, the trove of documents presented Monday night in a dramatic speech by Prime Minister Binyamin Netanyahu, already in 2016, Israeli sources were quoted as saying. The New York Times published new details about the archive, with the sources saying that Israel acquired the large amount of documents, videos and other materials in a break-in at the facility they were being stored in nearly a year ago.

The Mossad agents absconded with all the documentation in that one break-in. The site where the details on Project Amad was discovered by Mossad agents in February 2016, and after nearly a year of planning, it was decided to go ahead with the mission of acquiring the documentation in early 2017. The United States was updated on every aspect of the mission, with Mossad chairman Yossi Cohen personally conferring with President Trump in advance of the operation.

The documentation was shipped to Israel the same time it was taken, the report said. Although it has been in Israeli custody for a year, the documentation was not revealed until now because teams were tied up translating it, as most of it was in Farsi, the Persian language. The source said that the documentation was not a timeline for development of nuclear weapons, but a compendium of the acquired knowledge of Iran that could be rolled out for quick completion of a weapons project when the country’s leadership deemed it to be the right time.

Commenting on the trove, U.S. Secretary of State Mike Pompeo said that the documentation, which Israeli officials have discussed and presented to American security officials, was of high value. Until recently head of the CIA, Secretary Pompeo told reporters that his agency had “known about this material for a while and we certainly discussed this material yesterday when we were together. It’s been something that’s been in the works for a while. I know that there are people talking about these documents not being authentic. I can confirm with you, for you, that these documents are real, they are authentic,” and, he added, there are thousands of new documents and new information. We’re still going through it, there’s still a lot of work to do to figure out the scope and scale of it, but it is the case that there is new information about that program.”

Commenting on the presentation Monday night by Netanyahu, who stressed that the bottom line was that Iran was lying to the world about the extent of its nuclear program, Construction Minister Yoav Galant (Kulanu), himself former head of the IDF’s Southern Command, said that besides the value in the material itself, the operation showed off the capabilities of Israel’s security apparatus. “This is an amazing achievement, beyond even the imaginations of the authors of the greatest works on spying and espionage. Anyone who studies this operation, and the military capabilities that were needed to pull it off, will think twice before taking dangerous actions against us,” Galant said.