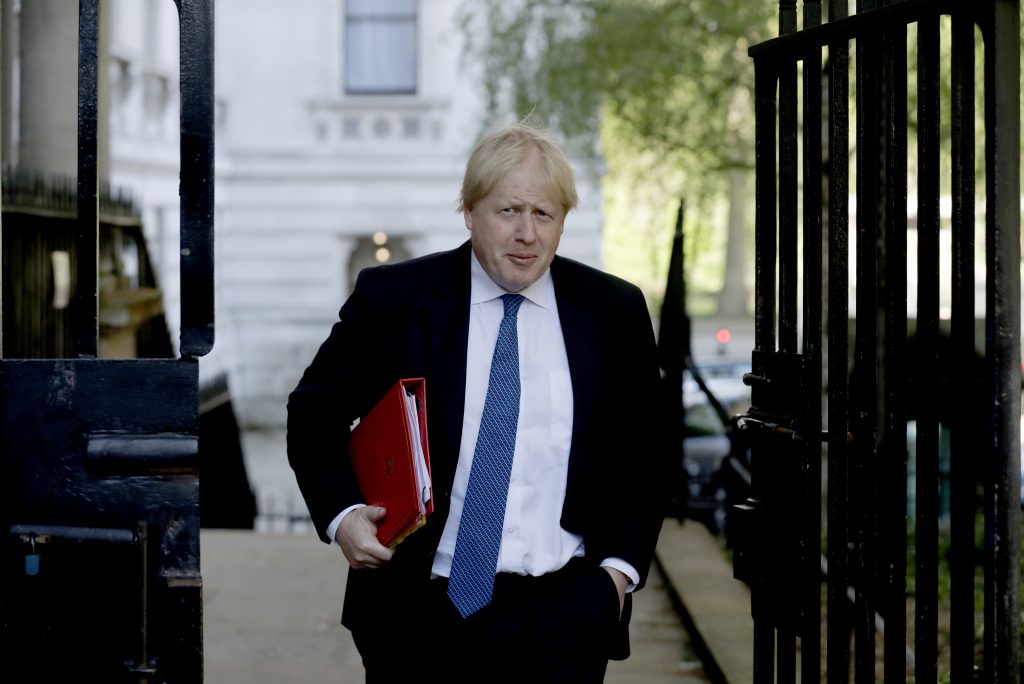 Britain’s Foreign Minister Boris Johnson said on Tuesday that the evidence presented by Israel about Iranian nuclear intentions shows why the international nuclear deal with Iran must remain in place.

Israeli Prime Minister Binyamin Netanyahu said he hopes the revelations will persuade the United States and other countries to withdraw from the 2015 international nuclear deal with Iran later this month, which he contends was based on deception.

British Foreign Minister Boris Johnson, however, said the presentation “underlines the importance” of keeping the deal’s constraints on Iran in place.

He says the deal is not based on trust about Iran’s intentions, but instead is based on verification and inspections.

Israeli Housing Minister Yoav Galant suggested a different angle on the matter: He said on Tuesday that the dramatic seizure of Iran’s nuclear program archive could help deter the Islamic Republic from trying to strike Israel.

“Anyone who saw the intelligence achievement can also understand what our military capabilities are,” the former IDF general said.

A senior Israeli official was quoted by The Jerusalem Post as saying that claims from Europe and elsewhere that the prime minister’s presentation contained nothing new were untrue.

He said that the IAEA’s report was based on the review of “more than a thousand” pages of documents, while Israel had obtained more than 100,000 documents.

“This archive teaches us many more details about Iran’s nuclear weapons program. We now have a much more detailed knowledge of what went on there,” he said.

While its existence has been suspected for a long time, Israel now has “evidence of a whole different level. We have a different level of proof of their weapons programs, and that it was ordered by the Iranian leadership. We have many new details on the equipment the Iranians have, which people are involved, and many other new things. Iran will be required to explain all of them,” the official stated.

Times of Israel editor David Horovitz lambasted the critics of Netanyahu’s speech, writing in an op-ed on Tuesday that “the largely derisive response in most international quarters to Netanyahu’s avalanche of evidence of Iran’s nuclear weapons program on Monday night, notably from among the nations that negotiated the 2015 nuclear capitulation to Iran, merely underlines their incompetence, their failure, their disingenuousness, and the gravity of the ongoing Iranian threat that they so reprehensibly failed to defuse.”

That signatories to the deal claim that Netanyahu showed nothing new, and that they knew all along of Iranian duplicity only makes matters worse.

If so, he asks, “How could they possibly have negotiated so lax an accord with the ayatollahs?”

“The European Union’s foreign policy chief Federica Mogherini, one of the cheerleaders of the 2015 deal, grandly declared on Monday night that the pact “was put in place exactly because there was no trust between the parties; otherwise we would not have required a nuclear deal to be put in place.”

“Put it another way: We knew they were lying, and that’s why we cut a lousy deal with them, a deal that did not dismantle the nuclear program we knew they had even though they swore blind that they didn’t.

“It must have been galling for the P5+1 negotiators and their defenders to watch that irritating Netanyahu strutting around in front of those shelves of files and those racks of CDs, claiming vindication and underlining the negotiators’ scandalous failure.”