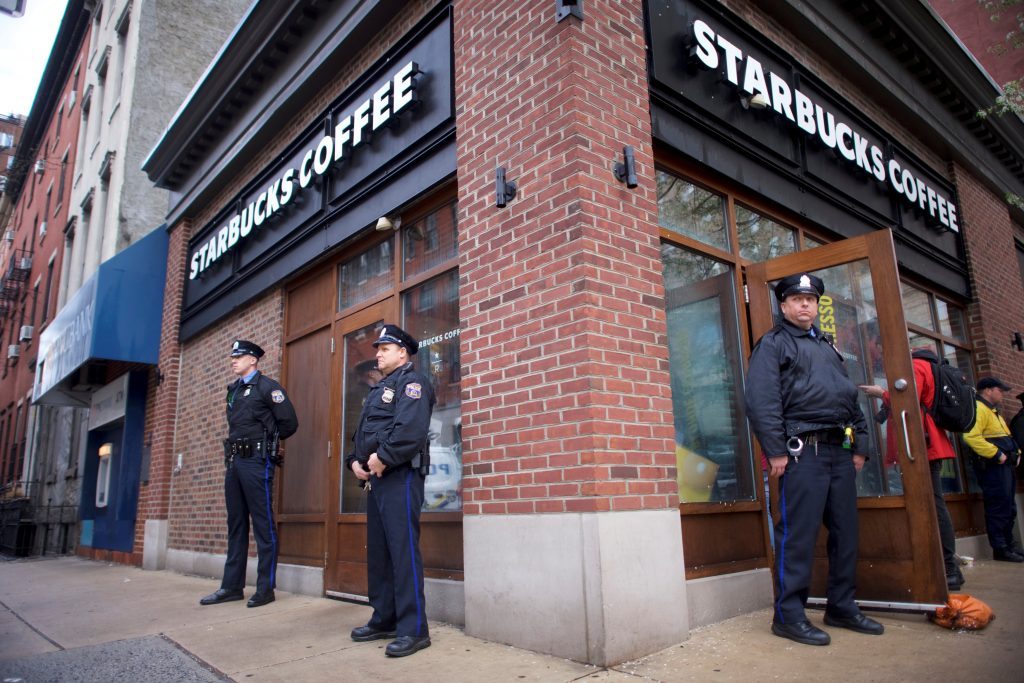 On May 29th, Starbucks coffee lovers across the country will have to wake up and smell the coffee elsewhere. That is the date Starbucks says it will close its 8,000 company-owned stores in the United States to educate employees about racial bias. This is in response to the recent highly publicized incident in a Philadelphia Starbucks, where two black men were arrested for trespassing after refusing to leave or make a purchase.

Starbucks rush to issue a mea culpa is totally predictable in today’s mega-polarized climate of race relations. Equally unsurprising is the usual cast of characters backing Starbucks’ sycophantic apology. Jonathan Greenblatt, CEO and National Director of the ADL, is partnering with Starbucks to conduct the upcoming anti-bias training sessions. He joins a NAACP representative and Eric Holder, Attorney General under President Obama, who famously accused America of being “a nation of cowards” on race issues.

Greenblatt, previously a special assistant to Obama and a director at the George Soros funded Aspen Institute, is a natural partner in the trio. Speaking on CNN, he categorically charged “all of us” of having “implicit bias” when it comes to race.

Speak for yourself, Mr. Greenblatt. It little behooves the head of an organization that fights prejudice to ascribe prejudice indiscriminately to others. Moreover, it should be incumbent upon the CEO of a Jewish organization, which was established over 100 years ago to combat anti-Semitism, to consider exactly who he is fighting for and why. Especially since his support is now being rebuffed.

There is tangible irony in seeing Starbucks and Greenblatt advocate for minority groups that are now turning on them. Blacks were quick to call for a boycott against Starbucks, despite the coffee giant’s promotion of racial equality. Three years ago, Starbucks began a “Race Together” initiative, by instructing their baristas to initiate conversations on race. And, Starbucks Chief Executive Howard Schultz’s outreach being all inclusive, last year he pledged to hire 10,000 refugees in response to President Trump’s “travel ban.”

Greenblatt, too, has been at the forefront of every hot button progressive issue; issues that have little to do with combating anti-Semitism and everything to do with advancing the leftist agenda. He advocates for Black Lives Matter, despite their BDS support, blames Trump and the political right for a resurgence of anti-Semitism, and accuses American Jews of living with “white privilege.” He pledged to register as a Muslim should the Trump administration create a “Muslim registry,” and most recently suggested that deporting African migrants would make Israel appear racist.

But being a poster boy of the left hasn’t inoculated Greenblatt from being pilloried by the very groups he embraces. Because while he’s busy accusing others of “white privilege,” his protégés are accusing him of “Jew privilege.”

Poor Greenblatt is looking for love in all the wrong places. Any self-respecting Jew knows that championing causes that are rife with Jew haters, many of which defy Jewish values, only engenders disrespect. As head of an organization whose mission is to defend Jews, Greenblatt’s currying favor with progressives, many of whom are anti-Semites, undermines the very duty he is commissioned to uphold. Not only does he not gain their respect, but he gains their resentment — resentment directed against the most persecuted people on the planet, who have triumphed nevertheless.

In an era of increasing global anti-Semitism, much of it stemming from the radical left, it is imperative that the ADL, and perhaps its donors, redefine its original goals and identify its true friends. Consorting with leftist Jew haters, while condemning Jewish and Israel supporters on the right, will erode the organization over time, but not before it endangers those it is authorized to protect.

Greenblatt’s unrequited love for those who seek his demise underscores the folly of trying to shed one’s Jewish identity. Endeavoring to be a do-gooder for every politically correct cause, at the expense of one’s own unique Jewish one, will ultimately fail on both counts. Now is the time when it is imperative to avoid such failure. The Jewish people deserve better.

Mrs. Lehmann can be contacted at slehmann@hamodia.com.