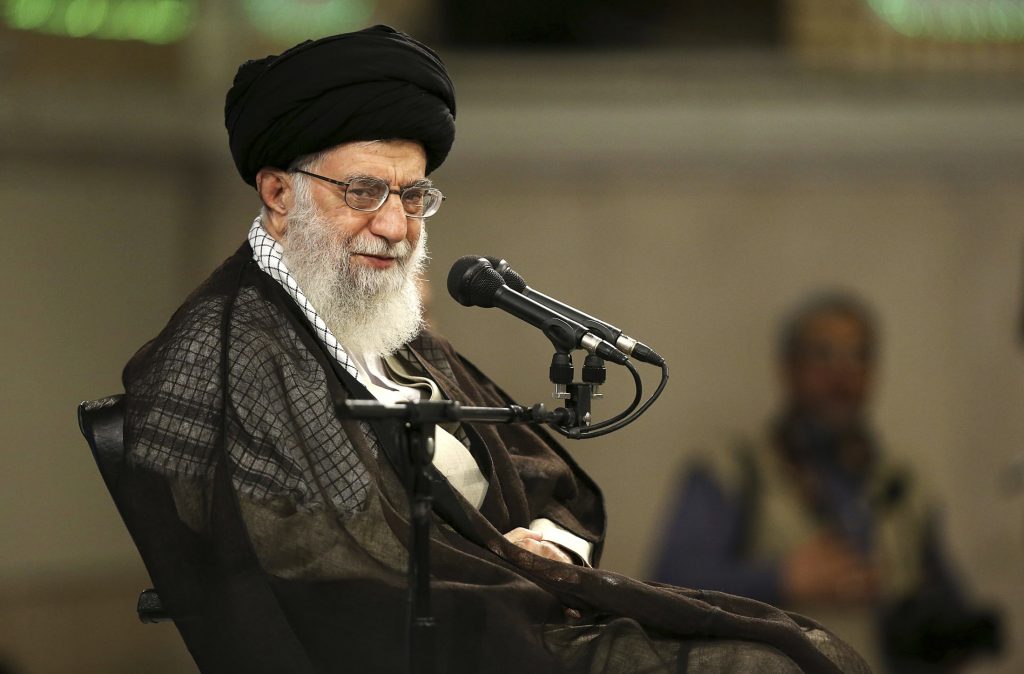 Iran’s supreme leader on Monday hit out at the United States a day after Secretary of State Mike Pompeo visited Riyadh, accusing Washington of trying to stoke a “regional crisis” by provoking its ally Saudi Arabia to confront Tehran.

In remarks broadcast on state media, Ayatollah Ali Khamenei reiterated longstanding calls for the United States to “leave” the Middle East, which he called Iran’s home, and said any power seeking to challenge Iran would be defeated.

“One of the ways to confront Iran is to provoke inexperienced rulers of the region,” he said, in an apparent reference to Saudi Arabia’s 32-year-old Crown Prince Mohammed bin Salman.

“Americans are trying to provoke Saudi Arabia against Tehran … Their aim is to create more regional crisis … to push Muslims to fight against Muslims.”

Khamenei’s remarks were aired a day after Pompeo met Saudi King Salman in Riyadh on a flying visit to the region.

Pompeo said on Sunday that the United States was deeply concerned by Iran’s “destabilizing and malign activities” in the Middle East.

Appearing to address those remarks, Khamenei said Iran had no intention of limiting its influence in the Middle East.

“Americans are the ones who should leave … The Middle East, the west of Asia and the Persian Gulf is our home,” Khamenei said.

Tehran and Riyadh have long been locked in a proxy war, competing for regional supremacy from Iraq to Syria and from Lebanon to Yemen. President Donald Trump has strongly backed Saudi Arabia in its efforts to counter Iran’s influence.

Iranian state media quoted Iran’s Foreign Ministry spokesman Bahram Qasemi as saying Tehran would keep on backing its friends in the region despite U.S. pressure to curb its influence.

“The cooperation between America and Saudi Arabia will further destabilize the Middle East and will lead to more crisis in the region,” Qasemi said. “Pompeo’s remarks about Iran are baseless and repetitive … As long as the legitimate governments of the regional countries need our help, Iran will remain in those countries.”

In Riyadh, Pompeo reassured Saudi Arabia that the United States would exit Iran’s 2015 multinational nuclear deal, unless European signatories of the accord “fix” it.

President Trump has given the European signatories a May 12 deadline to “fix the terrible flaws” of the 2015 nuclear deal, or he will refuse to extend U.S. sanctions relief on Iran.

Under Iran’s settlement with the United States, France, Germany, Britain, Russia and China, Tehran agreed to curb its nuclear program to satisfy the powers that it could not be put to developing atomic bombs. In exchange, Iran received relief from sanctions, most of which were lifted in January 2016.

Khamenei has warned that Tehran would stick to the accord as long as the other signatories respected it, but would “shred” the deal if Washington pulled out.

Britain, France, Germany, Russia, China and the European Union say Washington cannot unilaterally cancel an accord enshrined by a U.N. resolution. But they have called on Iran to curb its regional influence and ballistic missile program.

President Trump accuses Iran of supporting terrorism and says the 2015 deal does not do enough to block its path to acquiring nuclear weapons. Iran says it does not seek nuclear arms, and blames Washington and its allies for stirring Middle East tension.

Iranian officials on Monday reiterated that Tehran had no intention of suspending its defensive missile capability.

“By accusing Iran, Americans want to justify their presence in the region and to sell weapons to the regional countries,” Tasnim news agency quoted deputy head of Iran’s elite Revolutionary Guards Hossein Salami as saying.