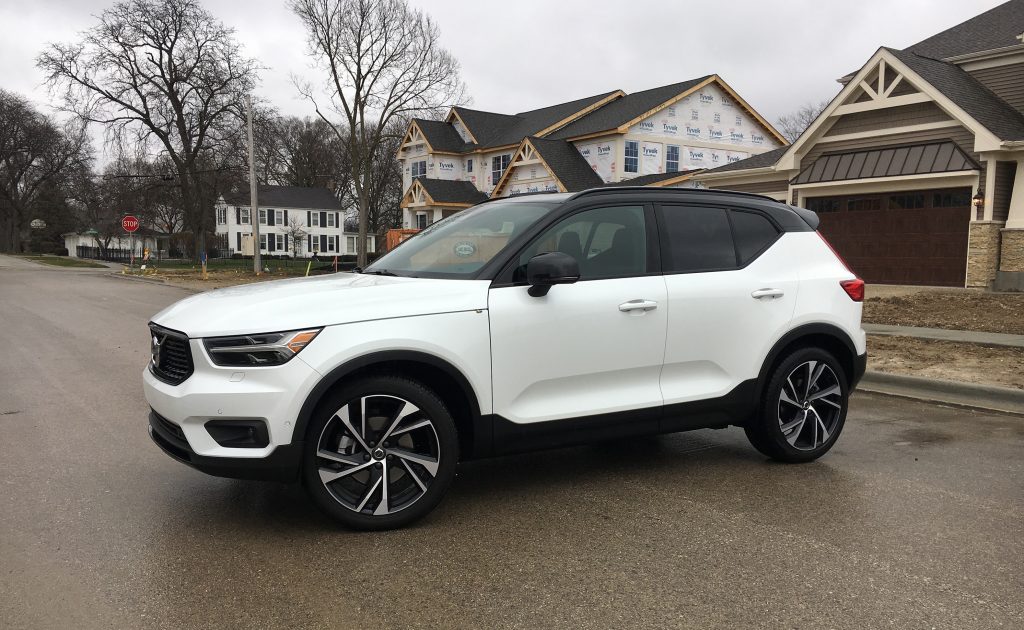 Volvo is one of the last automakers to flesh out its premium crossover lineup, yet it has done so with winning success. The XC90 three-row crossover won 2016 North American Truck/Utility of the Year; the midsize XC60 earned 2018 honors. Now comes the 2019 Volvo XC40, which straddles the line between the smallest subcompact crossover and the roomier compact crossover space.

It looks smaller than it feels on the inside. Three can fit in the back seat with ample legroom, though headroom can get tight for 6-footers. Even with a full load, there is enough cargo room to haul the kids’ — or grandkids’ — gear for the weekend. There are plenty of clever storage areas for phones, cups and trash too.

Visually it’s clean and strong like Jaguar’s growing family of crossovers, and more edgy than the German brands’ tendency to round off the edges with the pretension of sport.

The wheelbase is long with short overhangs for a sporty profile, but the face is broad and tall, with black undercladding to give it an SUV vibe.

In design and performance, as well as technology and comfort, XC40 does it mostly well. While so many other premium crossovers feel like a compromise without a soul, the XC40 evokes the soul of the new Volvo: balance, beauty and evolution.

But it’s time to evolve from the nuisance they call a gear selector. It requires a double shift to get into reverse or drive that left us in neutral more times than not. Why, Volvo, why?

In sport mode, the 248-horsepower four-cylinder is responsive and punchy, though it lacks some high-end power. It won’t be mistaken for a performance crossover. In comfort and eco mode, the shift points in the eight-speed automatic come quicker, and start/stop technology as well as the turbocharger help conserve fuel to a respectable 26 mpg while averaging 47 mph. EPA estimates 23 mpg around town and 31 mpg highway, which we fell short of by at least 2 mpg.

Handling isn’t as sporty as the Infiniti QX30 hatch, but XC40 stays close to the road. Overall, it does a good job of balancing a bit of performance in a smooth and quiet ride.

The tester in R-Design trim had all the upgrades, including Pilot Assist semi-autonomous drive system ($900 as part of Premium package) and park assist ($1,100 as part of Vision package). Volvo’s system is one of the safest and easiest we’ve tested. The system provides about 15 seconds of self-driving before the small icon under the speedometer turns orange and instructs the driver to put hands back on the wheel. After another five seconds there will be an audible alert, and the message will say Pilot Assist has been canceled. Realistically, drivers could get away with checking their phone while in traffic on the highway but, you know, don’t.

The self-parking feature is also effective and safe; it might not split the spot perfectly, but it cuts it faster and tighter than most humans. Just man the brake.

Of all the shades of orange, few look good, yet the Lava orange carpet on the doors, floors and console looked really sharp with the black and chrome seats and trim pieces.

All is not perfect, of course. The touch screen is a computer that can be slow to load and respond. There is a steep learning curve with the three pages of available info, so take the time to get to know the vehicle to optimize its capabilities. For a company steeped in safety, Volvo’s reliance on the touch screen requires some long looks and swipes to get it right.

The question mark with all these small luxury crossovers is how quickly the options add up. Paying more than $50,000 just ain’t right, yet it happens. The fear is real in the XC40, with power folding headrests and power folding 60-40 rear seats, but it is priced right, further affirming its well-balanced proposition in a market awash with similar, not as well-executed rides.