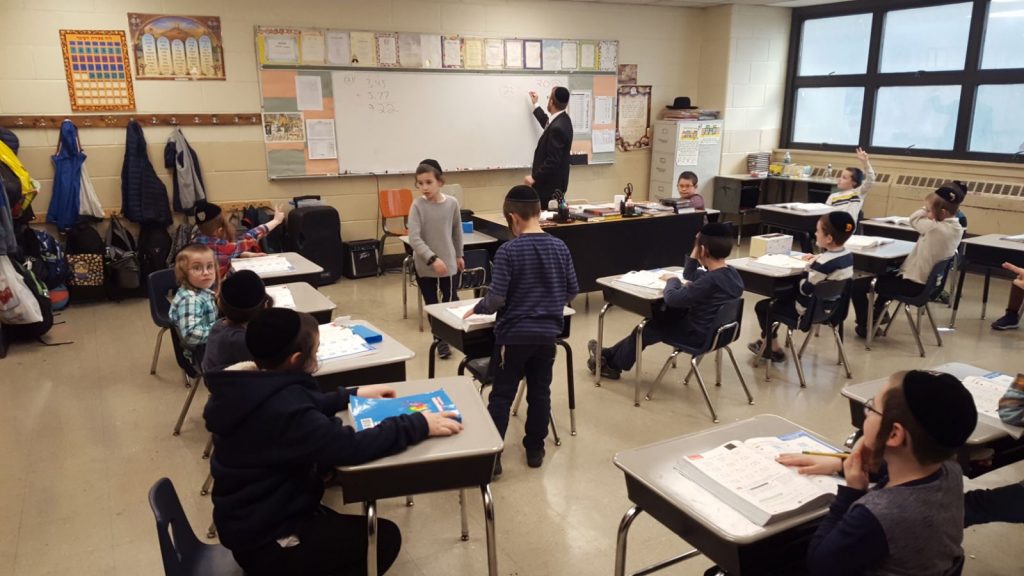 She was invited to attend a City Hall rally billed as advocating “education for all,” unaware, in her retelling, that it was designed to undermine yeshivos. Who can be against education for all, she figured.

On Thursday afternoon, state Sen. Marisol Alcantara toured Yeshivah Chasan Sofer in Boro Park and apologized for her attendance at the anti-yeshivah protest this past Pesach.

“I was invited by a constituent to an educational rally,” she explained, standing in a large library room containing thousands of titles. “When I got there and I saw the signs I realized what this was going to be about — I am glad that I got invited [to the yeshivah] and that I got an opportunity — I hope this is not my last time; it is my first time. But it’s been a wonderful experience.”

Talks with yeshivah advocates, as well as an hour’s walk around the place, Alcantara said, convinced her of the excellence of a yeshivah education.

She was accompanied by state Sen. Diane Savino, a Staten Island Democrat and close ally of Jeff Klein, the founder of the former breakaway Independent Democratic Conference which rejoined the mainline party earlier this month. Alcantara was also a member of the eight-strong group.

The tour guide was Rabbi Mayer Weinberger, the yeshivah’s executive director, as well as Rabbi Avrohom Schwartz, the principal.

Walking the halls and climbing the steps, the two senators walked in to several classrooms, where teachers and students continued their studies uninterrupted. A teacher in the fifth-grade class was instructing his charges on shopping, how to add costs and figure out the best prices.

“I forgot all that from my younger days,” joked Savino.

Walking across the hall to the sixth grade, a teacher was asking his students for synonyms of words written on the board.

The next one was harder. “Privilege,” announced the teacher. “Honor,” suggested one child. “A right that no one else has,” said another.

“You’re all right,” the teacher conceded. “Let’s write it down as a ‘special right.’”

Gathering in Rabbi Weinberger’s office, the longtime director gave a brief history of the yeshivah and its educational methods.

“Our yeshivah is 270-odd years old,” he began, “started by a major decisor of Jewish law,” referring to the sainted Chasam Sofer. “It was handed down from one generation to the next — from his son-in-law to his son, until the current leader, Rabbi Ehrenfeld.”

Rabbi Weinberger pulled out a notepad and began spitting out bits of data. Some 76 percent of his eighth graders pass English language arts at or above average, with 69 percent passing the Regent’s. He read out numbers of lawyers, doctors, business owners who graduated from Chasan Sofer, also noting the cultural diversity of its alumni.

Zev Gips introduced himself as the president of Sheetmetal On Target, a construction company that employs “100-plus” workers. He also volunteers as a paramedic for Hatzolah.

A vegetable smoothie maker, a Mr. Gumbo, said that he took over father’s business and employees 19 people. He praised the education he received, adding that the education his son gets is “tenfold” of what he got.

“They taught me honesty and the basics of how to run a business,” he said.

When alumnus Samuel Katz was introduced as an attorney who graduated from Hofstra law school, Savino joked, “I should have come here, I’d be a lawyer, too.”

Rabbi Weinberger addressed the senators with a plea for fairness.

“But very little attention has been paid to our end products,” he said.

Both Savino and Alcantara noted that the Orthodox community has traditionally been a core of the Democratic basis, and under the reunified party will continue to ensure it remains a “broad tent.”

“I come from a community that sometimes is vilified, too, for things that are not understood,” Alcantara added. “So for me this is a learning experience, and I can tell people about my experiences here.”