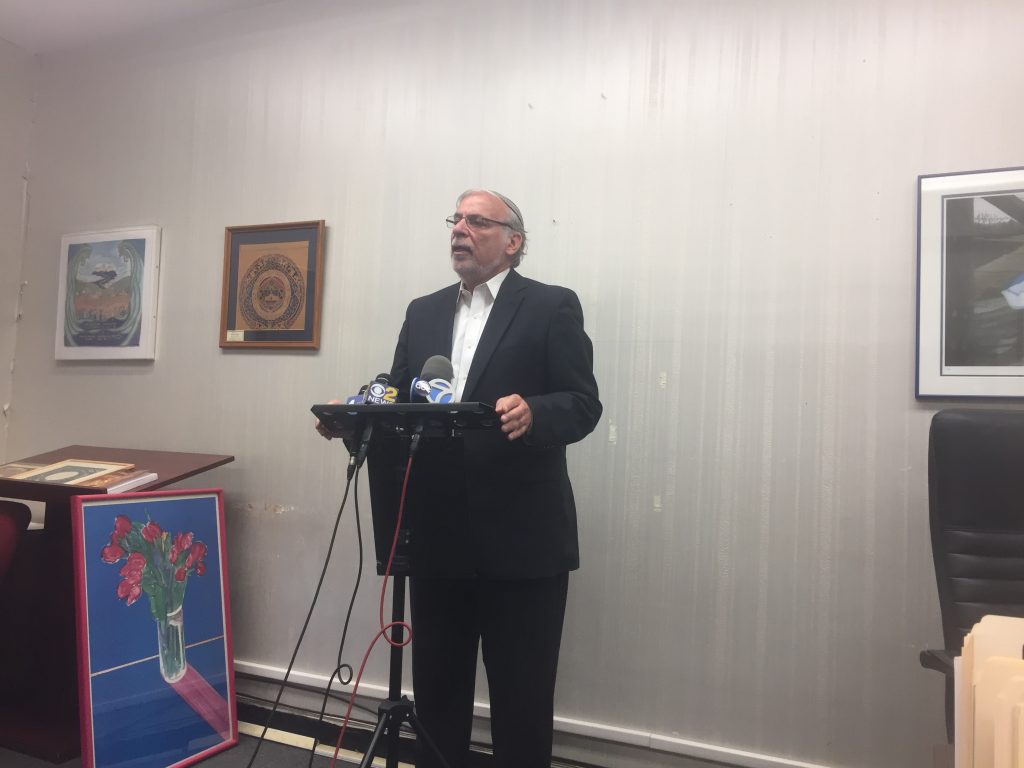 An icon of Boro Park politics for two generations, Dov Hikind announced Wednesday morning that he will not stand as a candidate for New York State Assembly as he has for the past 36 years.

“I am excited about my future — there is still so much to be done,” the longtime Democrat lawmaker said in a statement, adding that he was preparing for “the next chapter of my life.”

In a telephone interview with Hamodia on Wednesday afternoon, Hikind emphasized that he will continue to be there for constituents until the last minute of the last hour.

“I told my staff,” he said, “‘until the last day of December, we will continue to be there for people.’ We are second to none — anywhere — in being there for people and getting things done.”

Hikind refused to say what he will be doing come January, though he hinted that it will entail more frequent visits to Israel. A book is also in the works, which will not appear until after he leaves office.

He listed off the issues he was involved in over the decades — Soviet Jewry; justice for Gideon Busch, a mentally disturbed man fatally shot by police in Boro Park two decades ago; demanding the police protect Jews during the Crown Heights riots; visits to Israel during times of battle — up to this week’s fight to get a firefighter who once posted anti-Semitic tropes online transferred out of Boro Park.

Hikind said he was supporting Simcha Eichenstein, who works in Mayor Bill de Blasio’s administration as director of political and governmental services, to replace him in the September primary and November general election.

“Simcha’s a great guy. He’s got the experience — I think he’ll make people very proud,” he said. “He’s very committed. I’ve actually worked with him and he will treat everyone in the proper way. He’s a real, real mentch.”

It appeared that some community leaders were coalescing behind Eichenstein, 34, who was pivotal to their relationship with Mayor de Blasio these past four years. He also has extensive experience working in Albany, having served as a senior advisor to State Comptroller Thomas DiNapoli from 2011 until 2015.

“I’m unbelievably excited about the prospect [of Eichenstein in the Assembly],” one community insider said. “We need an effective, thoughtful person who is loved and respected by both sides of the political aisle. I think this will be just fantastic, especially in these stormy times.”

Aided by a prodigious record of constituent services, Hikind was re-elected by huge margins in election after election since 1982 to represent the 48th District, which is includes most of Boro Park. He was known outside the district for using the bully pulpit of his office on behalf of Jews worldwide, protesting the plight of Soviet Jewry in the 1980s, and more recently Jewish victims of Islamic terrorism.

Praise for Hikind poured in from local elected officials.

Agudath Israel of America hailed Hikind’s service in a statement.

“For 36 years, Dov has been a fierce advocate in government for individuals, his community, and all of Klal Yisroel,” the statement said. “His heart overflows with love for the Jewish people, and his level of passion for important causes, including causes that might be unpopular but are just, is unparalleled. We have been proud to work with him on many important legislative accomplishments over the years.

“Though he may be formally retiring from government, we know that Dov Hikind will never retire from serving the community in whatever capacity he is able.”

Yeger, who last year defeated Hikind’s son Yoni to represent a nearly-overlapping district with Hikind, Sr., said that the thing that propelled him to public service was watching Hikind during the 1991 Crown Heights Pogrom.

“It has long been said, ‘If you’re not at the table, you’re probably on the menu,’” Yeger said. “Dov always fought to keep us at the table and off the menu. While we may not have always agreed, I like to believe that we agreed far more than we didn’t.”

David Greenfield, a former councilman and current executive director of the Met Council, tweeted his praise for Hikind, a former boss.

“Thank you … for your decades of committed service to the community,” he posted. “Your outspoken voice on behalf of the community will be missed. Best of luck in your retirement.”

Hikind, 57, was born in Williamsburg to a Vizhnitzer family. He came of political age as a follower of the late Rabbi Meir Kahane, Hy”d, once crashing a speech by President Jimmy Carter to protest his pressuring Israel to cede territory.

“I’m very excited about what we’re doing in January,” Hikind said. “When you reach 36 — twice chai — it’s time to start the next chapter in life.”

“Every time I say 36 years,” Hikind noted, “it’s hard for me to even fathom what that is.”