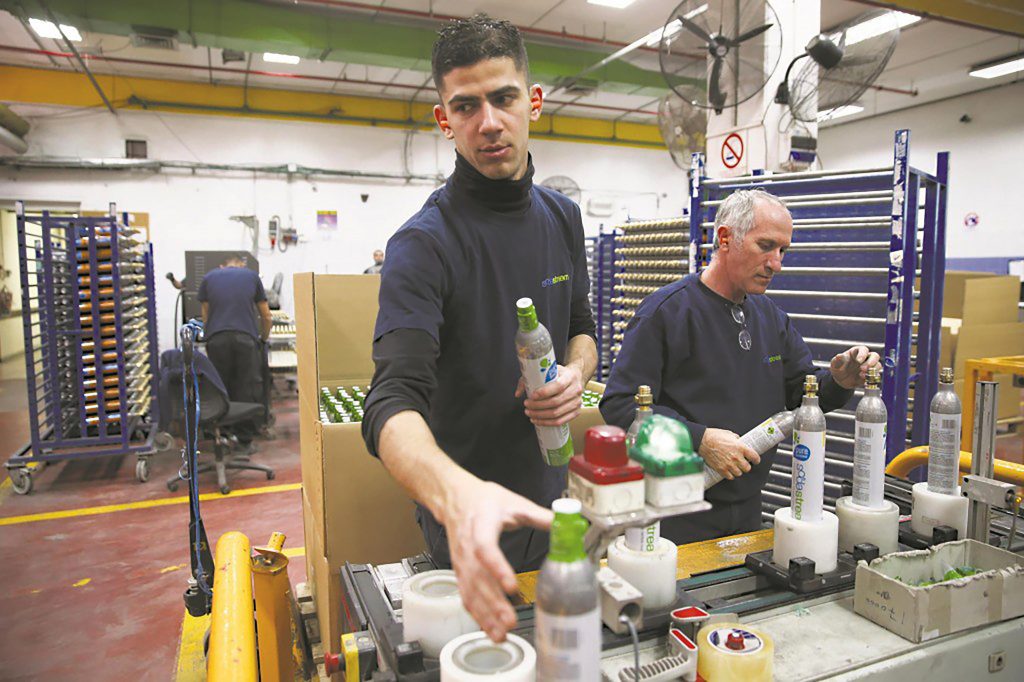 Mayor Nicola Khamis has brought shame to his office. No, he wasn’t caught taking bribes or providing cushy jobs for family members. Worse. The mayor of Beit Jala, a Palestinian Christian town near Beit Lechem, confessed to being employed as a sales rep by Tnuva, the huge Israeli dairy concern.

In an interview with the Palestinian Wattan broadcast authority, Khamis was asked, “Some say that the reason behind the recent decline in your popularity is attributed to the fact that in addition to your job as mayor, you are also the representative of the Israeli company Tnuva. What is your response to this claim?”

Guilty as charged, responded the mayor. “I’m a representative of the Tnuva company,” he said. “I’m like any Palestinian citizen, like anyone from Palestine who goes out to work in settlements. We built their settlements, we built their houses, we paved their roads, we worked in their homes. This is our situation. All the people are seeking to earn a living.”

The mayor deserves credit for telling the truth, that Palestinians care more about earning a living than issues like nationalism. Moreover, many depend on Jewish employers for their livelihood, and object to the Boycott, Divestment and Sanctions Movement (BDS) – which encourages various forms of boycott against Israel – since it harms Palestinians more than anyone else.

The classic example is SodaStream, the Israeli carbonated beverage company. In 2014, its plant in Mishor Adumim, near Maale Adumim, employed 1,300 workers, including 350 Israeli Jews, 450 Israeli Arabs and 500 Palestinians from Yehudah and Shomron.

Pay and benefits were identical for workers in comparable jobs. The Palestinians had dream jobs as far as they were concerned, with full medical benefits, vacation pay, meals served at the plant and even a mosque provided by SodaStream CEO Daniel Birnbaum.

But its location in the “West Bank,” some 20 minutes from Yerushalayim, was a red flag for BDS, whose vile campaign succeeded in 2016 in getting Birnbaum to close down and move 60 miles away to Lehavim, near Be’er Sheva.

Birnbaum didn’t lose a penny. On the contrary, he received a $20 million grant from the Israeli government, which seeks to encourage employers to set up shop in the south of the country. The Israeli Jews and Arabs employed at SodaStream had the option of continuing to work at the new facility or finding something else. The big losers, of course, were the 500 Palestinians, who stand little chance of finding jobs that bring the same wages and benefits, or anything close.

Palestinian activist Bassam Eid spoke to a number of those who lost their jobs at SodaStream, including a man named Basel. “Basel used to earn NIS 6,000 a month at SodaStream, and now, under the PA, only NIS 1,450 a month is available,” Eid wrote. “The BDS movement is at the forefront leading the boycott, and as such it is hurting Palestinians a lot more than it is hurting Israel.”

Ali Jafar, a Palestinian who worked at SodaStream for two years, told the Associated Press: “All the people who wanted to close [SodaStream’s factory] are mistaken. They didn’t take into consideration the families.”

Of course, none of this concerns the economic terrorists from BDS, who could care less about improving the well-being of Palestinians. “This [the closure of SodaStream] is a clear-cut BDS victory against an odiously complicit Israeli company,” said Omar Barghouti, co-founder of the BDS movement. “Israel should not be allowed to exploit its occupation by operating factories in Palestinian lands.”

Barghouti and his ilk are so blinded by their hatred of Israel and their desire to do it harm, that they can’t see how much they are hurting the Palestinians, the people they profess to be helping.

That’s why BDS is vehemently opposed by many Palestinians, including Hazem Ahmed, who in response to the “confession” of Beit Jala Mayor Khamis, noted: “The problem is that BDS is dying to find anyone to boycott Israel, and here is a mayor saying he works for an Israeli company. If BDS belonged to me, I would promote a boycott of the Palestinian Authority, and not the occupation, because they [the PA] are worse.”

Other Palestinians also defended Khamis, arguing that Palestinians had no choice but to work with Israel and purchase Israeli products and that it was hypocritical to attack the mayor.

“Those who are pretending to be honorable and patriotic people should also boycott Israeli electricity, cement, fuel and the shekel,” said one Palestinian.

The mayor noted that even the Palestinian Authority had institutions and representatives working with Israeli companies.

The bottom line is that BDS is harming the interests of Palestinians in pushing for boycotts of Israeli institutions beyond the so-called Green Line. The reality is that Palestinians are grateful for the opportunity to work for Jews in Yehudah and Shomron, and that those who seek to harm the settlement enterprise are hurting the Palestinians more than anyone else.