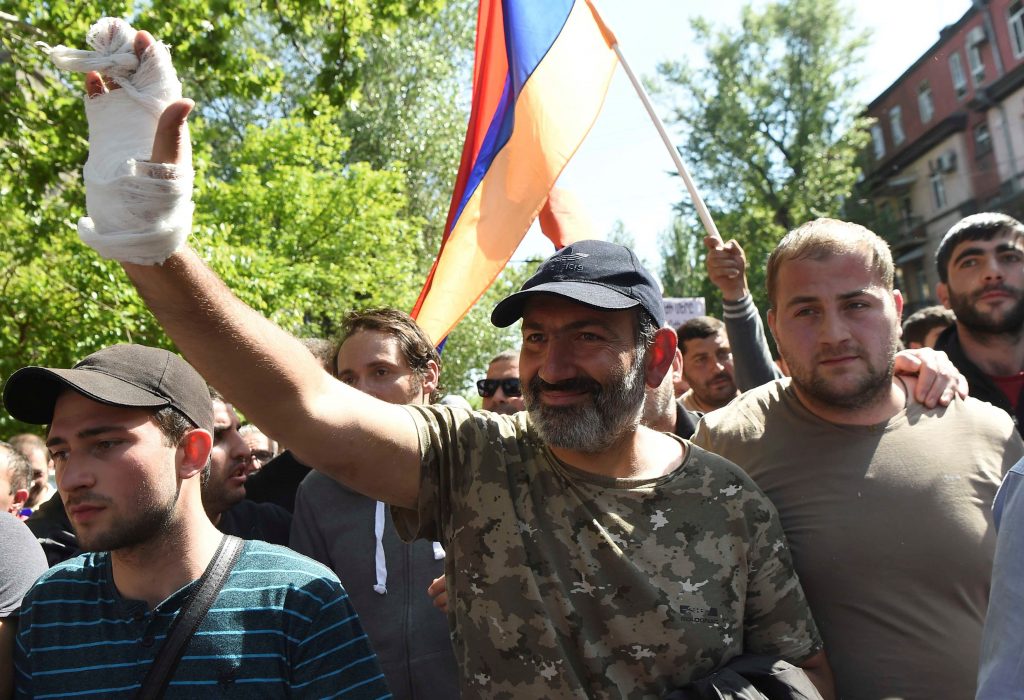 The abrupt resignation of Armenian Prime Minister Serzh Sargsyan after two weeks of protests against his rule has caught the opposition off guard: The protesters had focused on driving out what they consider a corrupt elite, and seem to lack the structure or the political platform to replace it.

Waving the Armenian tricolor and chanting their leader’s name, some 10,000 opposition supporters marched on Tuesday with protest leader Nikol Pashinian to a hilltop memorial complex in Yerevan, the capital of this Caucasus Mountains country, to mark the massacre of 1.5 million Armenians a century ago by Ottoman Turks.

Armenians across the country are commemorating the massacre that began 103 years ago. Armenians and many historians consider it to be genocide, but Turkey, successor of the Ottoman Empire, vehemently denies the claim.

The protests, which lasted ten days, culminated on Monday, when Prime Minister Serzh Sargsyan, who has ruled Armenia since 2008, announced his resignation, saying that he was “wrong” to reject the opposition’s demands for him to step down.

The opposition insists that Sargsyan’s resignation is just the first step in the political transition they were pushing for. They want acting Prime Minister Karen Karapetian, an ally of Sargsyan, to also step down after he and the opposition agree on the date of a snap election.

With a red rose in his hand, protest leader Pashinian led the procession to the memorial complex on Tuesday afternoon. His supporters were jubilant and anxious for the political transition.

“We need a change of government,” said 43-year-old businessman Gregor Adamyan. “We’re tired of pressure and corruption of one clan.”

But the opposition appears far from ready to form a united political force.

The coalition of the three parties leading the protest currently holds just 7 percent of the parliamentary seats, and has not taken any stand on relations with Russia, Armenia’s key ally and economic donor, or any other major political issue.

Pashinian, a 42-year-old former journalist who was elected into parliament in 2012 on an anti-corruption platform, garnered less than a quarter of the vote at last year’s mayoral election in Yerevan. Pashinian has been mildly critical of Russia’s presence in Armenia, but otherwise his political views are obscure.

“The opposition lacks a clear program of reforms, constructive agenda or clear demands,” said Alexander Iskanderian, director of the Caucasus Institute in Yerevan. “It’s not that people took to the streets to support the opposition which has no clear structure or organization — they (did so to) protest against the corrupt government which became totally shameless.”

Pashinian has so far not offered any plan or vision for Armenia, other than calling for the snap parliamentary election and making sure that none of Sargsyan’s allies remains in office, preventing the former prime minister from pulling the strings from behind the scenes.

The Armenian opposition will be naive to crack open the champagne unless Sargsyan’s allies — Karapetian in particular — are out, analysts warned.

“We have not seen a change of a political elite yet,” said Ruben Megrabyan of the Armenian Center for Global Studies. “Karen Karapetian represents the same corrupt ruling class, so the opposition’s victory was symbolic.”

Several hours before the opposition supporters marched to the memorial of the 1915 massacre, Karapetian and other officials also honored the memory of those killed.

Karapetian said in an address to the nation that Tuesday’s march to the genocide memorial shows that “we are together and we are united in spite of the difficulties and unresolved issues at home.”

Since the Soviet Union’s collapse, Armenia, a landlocked country sandwiched between Georgia, Iran, Turkey and Azerbaijan, has relied on Russia for energy supplies and loans. Strained ties with Turkey and Azerbaijan have crippled the country’s development, making energy imports, among other things, costly.

Ties with Russia did not appear to be at the forefront for most protesters, and many of those marching in Yerevan on Tuesday spoke favorably of Russia.

“Armenia needs to be a bridge between Russia and Europe, not a vassal of the Kremlin,” he said.

Uncharacteristically for Russian authorities, who in the past decried anti-government rallies and so-called “color revolutions” in neighboring post-Soviet states as examples of hostile Western interference, Moscow this week has displayed a wait-and-see attitude.

Russia has refrained from applauding or condemning the government’s ouster, in an apparent effort to better position itself for building ties with the new authorities.

Earlier on Tuesday, a deputy Russian foreign minister met with the Armenian ambassador in Moscow. The ministry said that Russia is following developments in Armenia closely, and wishes the country a smooth and peaceful political transition. Separately, Kremlin spokesman Dmitry Peskov told reporters that the political transition is “our Armenian friends’ business” and said the Kremlin is “pleased that the situation is not moving toward a destabilization.”

Moscow keeps an important military base in Armenia and needs Yerevan as an unwavering ally in the post-Soviet space, so the caution is only to be expected.

“Moscow is being neutral and leaves room for maneuver in order to be able to bargain with the eventual winner later on,” political analyst Megrabyan said.