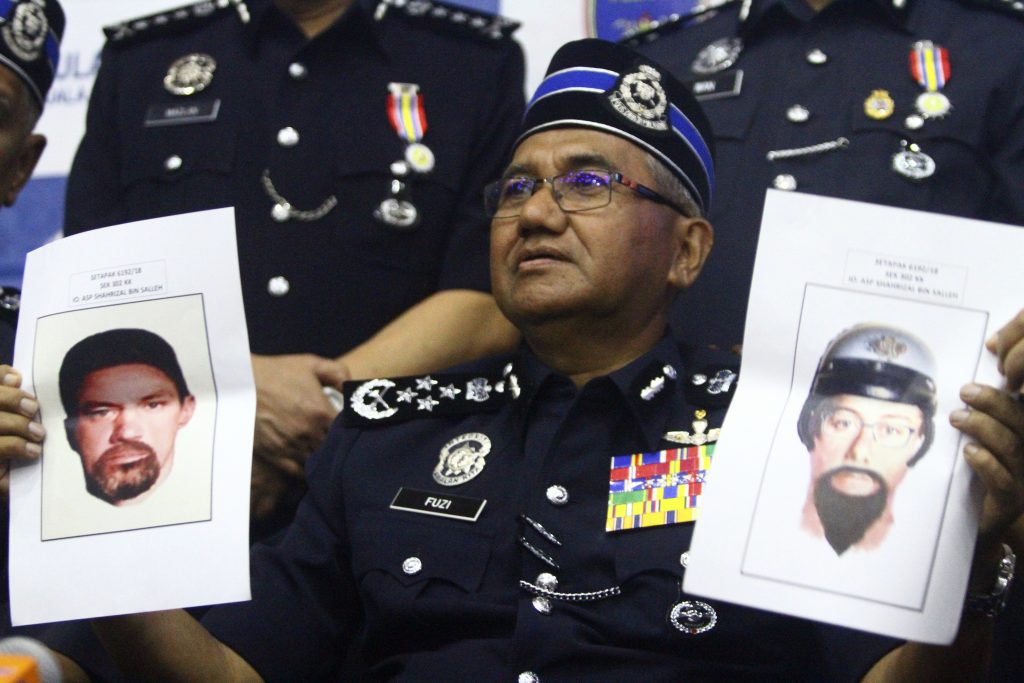 Malaysian police on Monday released computer-generated photographs of two men suspected of gunning down a Hamas engineer in Kuala Lumpur, adding that alerts have been put out for them at all the country’s exit points.

Two men on a motorcycle fired at least 14 shots at Fadi al-Batsh, an engineering lecturer, in Kuala Lumpur on Saturday, killing him on the spot.

The photographs of the suspects are based on descriptions by witnesses, police chief Mohamad Fuzi Bin Harun told reporters.

They show two light-skinned suspects who may be European or Middle Eastern. Both men are about 6 ft. tall with sturdy builds, the police chief said, according to a recording of his comments heard by Reuters.

Both suspects were on a high-powered, dark-colored motorbike which could be a BMW or a Kawasaki. Both were carrying backpacks and had on dark jackets and helmets.

The photos showed one suspect wearing a helmet and glasses.

A forensic examination found that the victim died of multiple injuries to his head and body. Fourteen bullets were found.

“We will send some of the bullets collected to our analysis experts to determine what kind of weapon was used in this heinous killing,” Mohamad Fuzi said.

He said they were not sure whether the men were still in Malaysia.

“We can’t close off our exits and we don’t have any other information apart from the photofit,” he said.

Deputy Prime Minister Ahmad Zahid Hamidi said on Saturday the suspects were believed to be Europeans with links to a foreign intelligence agency.

Defense Minister Avigdor Liberman dismissed claims of Mossad’s role in the murder and said it was likely that Batsh was killed as part of an internal Palestinian dispute.

Batsh’s family has requested for his body to be buried in Gaza.

Mossad has been accused of several high-profile killings involving Palestinians around the world, although Israel has consistently denied the accusations. The spy agency was accused of executing the murder of Hamas military commander Mahmoud al-Mabhouh in his hotel room in Dubai in 2010. In 2016 Hamas blamed Mossad for the killing of a Tunisian national it described as one of its drone experts.

In recent weeks, tensions have been running high at the Gaza-Israel border as Palestinians have ramped up protests demanding the right to return to homes that are now in Israel.

In another mystery killing of a foreigner in Kuala Lumpur, two women, an Indonesian and a Vietnamese, are on trial for murdering the half-brother of North Korean leader Kim Jong Un by smearing his face with VX, a banned chemical weapon, at the airport in February last year.