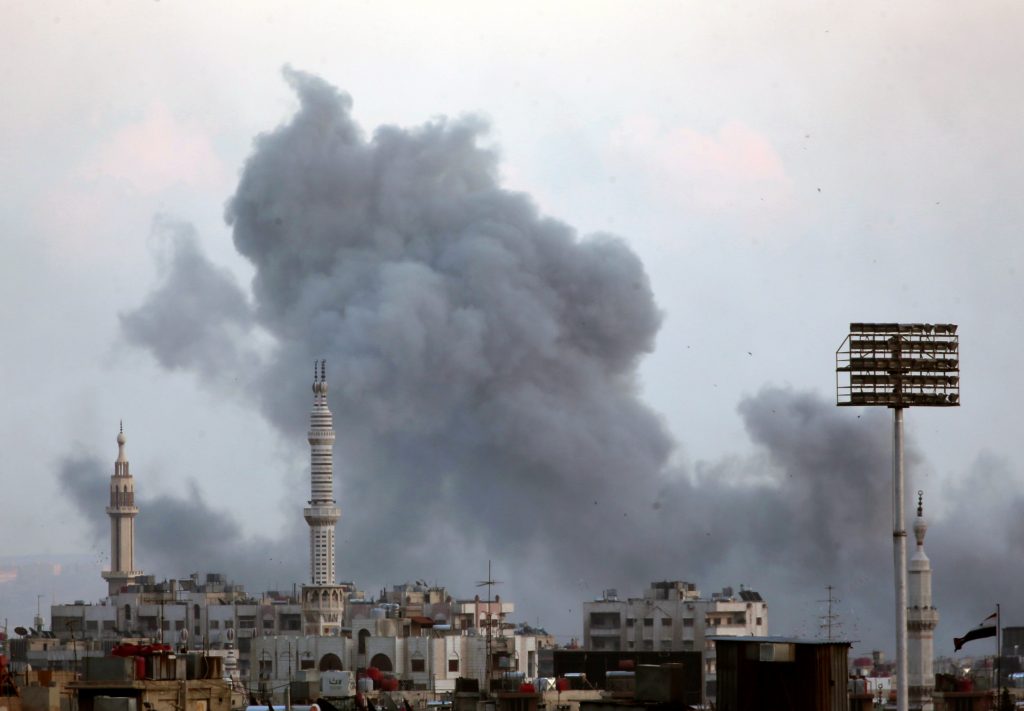 Airstrikes pounded an insurgent-held area near Damascus on Sunday, footage broadcast by state media stations showed, as the Syrian government stepped up efforts to wipe out the insurgency’s last foothold near the capital.

Thick clouds of smoke rose from the al-Hajar al-Aswad district as the sound of jets could be heard overhead in live broadcasts from the area.

The area is part of an enclave just south of Damascus that includes the Palestinian refugee camp Yarmouk and is controlled by jihadist insurgents from Islamic State and the Nusra Front.

It is adjoined by a pocket held by other rebel groups fighting under the Free Syrian Army banner.

President Bashar al-Assad, backed by Iran and Russia, is seeking to crush the last few besieged rebel enclaves, building on the defeat of insurgents in the eastern Ghouta region, which was the rebels’ last major stronghold near the capital.

Rebel fighters on Saturday began to withdraw from an enclave they held northeast of Damascus in the eastern Qalamoun region in a surrender agreement with the government. They are being transported to opposition-held territory at the Turkish border.

Although the conquest of eastern Qalamoun and the enclave south of Damascus will leave just one remaining besieged rebel enclave, north of the city of Homs, large parts of Syria at the borders with Jordan, Israel, Turkey and Iraq remain outside Assad’s control.

Anti-Assad rebels hold a chunk of territory in the southwest and the northwest, and Kurdish-led militias, backed by the United States, control an expanse of northern and eastern Syria.