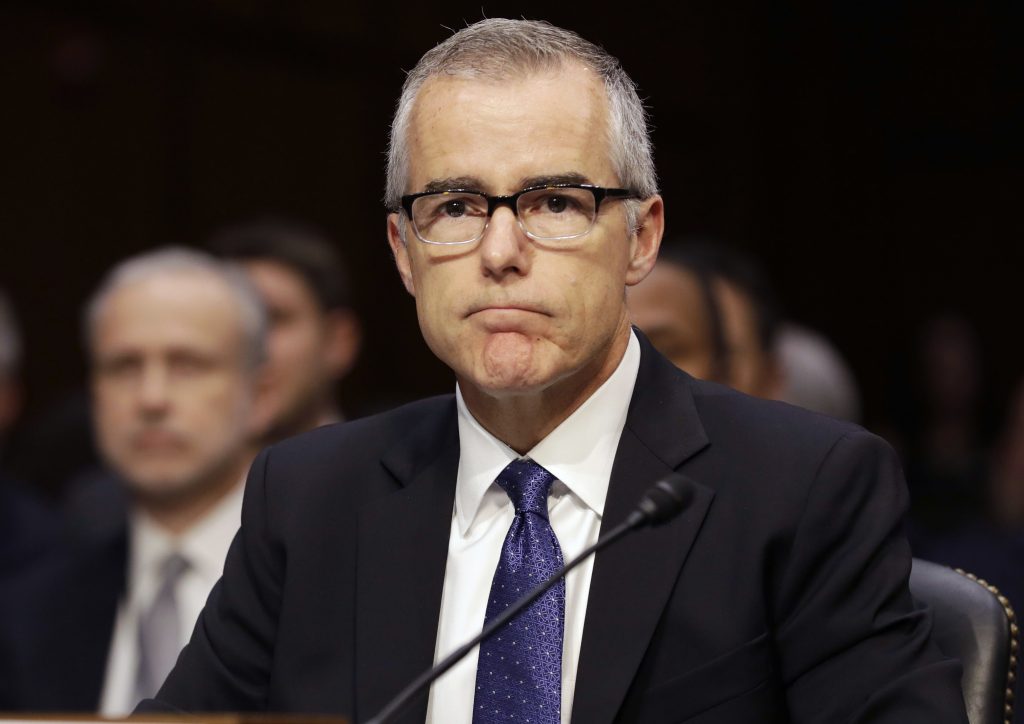 The Justice Department inspector general referred its finding:Former FBI Deputy Director Andrew McCabe repeatedly misled investigators who were examining a media disclosure to the top federal prosecutor in the District of Columbia, to determine whether McCabe should be charged with a crime, according to people familiar with the matter.

The referral to the D.C. U.S. Attorney’s Office occurred some time ago, after the inspector general concluded that McCabe had lied to investigators or to his own boss — then-FBI Director James Comey, on four occasions, three of them under oath.

It was not immediately clear how the D.C. U.S. Attorney’s Office responded to the referral, or whether prosecutors there are conducting their own investigation, or believe criminal charges are appropriate. A referral to federal prosecutors does not necessarily mean McCabe will be charged with a crime.

The Justice Department, the D.C. U.S. Attorney’s Office and a spokeswoman for McCabe declined to comment Thursday.

Last week, Inspector General Michael Horowitz sent to Congress a report blasting McCabe. It says he inappropriately authorized the disclosure of sensitive information to the media, then lied repeatedly to investigators examining the matter. The report — which quickly became public, though it was not released by the inspector general — laid out in stunning detail allegations that McCabe had deceived investigators about his role in approving the disclosure, even as he lashed out at others in the FBI for leaks.

McCabe, though, disputes many of the report’s findings and has said he never meant to mislead anyone.

Lying to federal investigators is a crime punishable by up to 5 years in prison, and some legal analysts speculated in the wake of the report that the inspector general seemed to be laying out a case for accusing McCabe of such conduct. The report alleged that one of McCabe’s lies “was done knowingly and intentionally” — which is a key aspect of the federal crime.

Attorney General Jeff Sessions fired McCabe from the FBI last month, just 26 hours before McCabe could retire, denying McCabe some of his retirement benefits and reigniting the political firestorm that has long surrounded the former FBI official. President Trump had repeatedly and publicly attacked McCabe, and McCabe alleged that his termination was politically motivated.

“This attack on my credibility is one part of a larger effort not just to slander me personally, but to taint the FBI, law enforcement, and intelligence professionals more generally,” McCabe said in a statement on the night he was removed from the FBI. “It is part of this administration’s ongoing war on the FBI and the efforts of the Special Counsel investigation, which continue to this day. Their persistence in this campaign only highlights the importance of the Special Counsel’s work.”

McCabe would later raise more than a half-million dollars for a legal-defense fund through a GoFundMe page. His firing was recommended by the FBI’s Office of Professional Responsibility, based on the inspector general’s findings.

Separately this week, a group of 11 House Republicans asked Attorney General Jeff Sessions, FBI Director Christopher Wray and Utah U.S. Attorney John Huber to explore whether McCabe — along with a host of other Justice Department officials— committed any crimes in their handling of the investigation of Hillary Clinton’s private email server, the probe into Russia interference in the 2016 election and other matters. Sessions has tasked Huber with looking into a range of GOP concerns.

The referral from the Inspector General to the D.C. U.S. Attorney’s Office is thought to be far more serious, as inspector general investigators are nonpartisan lawyers and agents who probe wrongdoing for a living.

Ironically, Comey — who appointed McCabe to his post as the No. 2 official in the FBI — stressed in his book released this week the importance of telling the truth to federal investigators and holding accountable those who do not.

Comey wrote that as he weighed whether to charge Martha Stewart with such an offense in the early 2000s, he asked his deputy how many people in the U.S. had been indicted on charges of lying to federal investigators in the previous year. The deputy told him the answer was 2,000. Comey wrote that he told his staff to indict Stewart.

“People must fear the consequences of lying in the justice system or the system can’t work,” he wrote.

The disclosure of which McCabe was accused of authorizing came in October 2016, around the time Comey would announce the FBI was resuming its probe of Hillary Clinton’s use of a private email server. At the time, Devlin Barrett — then a reporter at the Wall Street Journal — was preparing a story on the bureau’s handling of that case and another investigation into the Clinton family foundation. McCabe felt that the story would portray him and the FBI unfairly, so he authorized two other FBI officials to give Barrett his account. Barrett now works for The Washington Post.

Background conversations with reporters in Washington are commonplace, and McCabe had the authority, as the FBI’s deputy director, to authorize them. But the inspector general came to conclude he was acting out of self-interest, and that violated FBI policy.

Of particular concern was that McCabe effectively authorized the FBI to confirm an ongoing investigation into the Clinton Foundation, by revealing a phone call in which he pushed back against a Justice Department official, who warned that the bureau should not be taking overt steps in the case close to an election. McCabe asked the official: “Are you telling me that I need to shut down a validly predicated investigation?”

The inspector general wrote that Comey inquired with his deputy about the disclosure, and McCabe led him to believe he did not know who was responsible. McCabe’s team, though, disputes that, and says that emails between the two “clearly show that Mr. McCabe specifically advised Director Comey that he was working with colleagues at the FBI to correct inaccuracies in the story before it was published, and that they remained in contact through the weekend while the work was taking place.”

Inspector general investigators came to believe Comey, and they alleged McCabe lied on three other occasions to them and the FBI’s inspection division. Comey said in an appearance on a broadcast this week: “I still believe Andrew McCabe is a good person, but the inspector general found that he lied, and there’s severe consequences in the Justice Department for lying — as there should be throughout the government.”