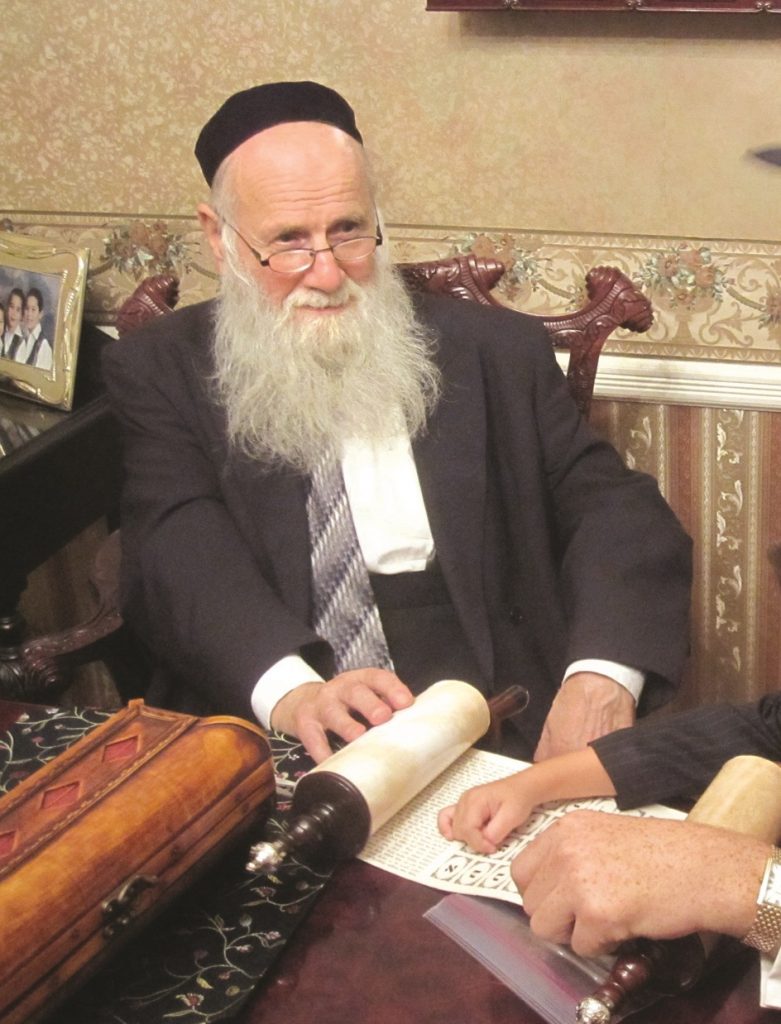 Harav Zechariah Gelley, zt”l, Rav of the Khal Adas Jeshurun (KAJ) kehillah of Washington Heights, was niftar on Thursday, 4 Iyar. He was in his mid-80s and had been suffering from illness for several years.

A towering talmid chacham, his depth and breadth in Torah bespoke levels of gadlus. With the same dedication and determination that drove him to rise from the challenges of life as a young boy in the midst of the suffering and loss of the Holocaust to become one of the most respected members of the elite Gateshead Kollel, so too would he go on to mentor a generation of talmidim as Rosh Yeshivhah of Sunderland and to lead one of the few kehillos steeped in the proud mesorah of minhag Ashkenaz.

Rav Zechariah Gelley was born in the early 1930s in the town of Topoľčany in the Slovakian section of what was then Czechoslovakia. His father, Reb Menachem, z”l, was a prominent member of the local kehillah who placed great emphasis on the chinuch of his children.

In 1944, the Nazis deported the young Zechariah and his mother, Mrs. Rifka Gelley, a”h, to the Bergen-Belsen concentration camp, where both would survive amid great hardship. His father, Reb Menachem, had died of typhus earlier during the war years.

Shortly after liberation, Zechariah received a visa to travel to England as part of a special program for child refugees. Young and alone, he entered the Yeshivas Netzach Yisrael in Sunderland, which had been established to provide a Torah chinuch for bachurim who had survived the Holocaust. He quickly became one of the most-prized talmidim of the beis medrash, spending hours developing his legendary abilities at plumbing the depth of Shas and poskim. In these years, he was often conflicted over whether to leave yeshivah and rejoin his mother, who, unable to gain entry to England, had settled in Australia. It was with great mesirus nefesh that he remained more than a half world away from her in order to continue his growth in learning.

In the mid-1950s, Rav Gelley married, tbl”c, Angeline Feldman, the daughter of Harav Raphael Feldman, zt”l, who served as a Rav in London. For decades to come, Rebbetzin Gelley would care for her husband’s every physical need as he remained singularly focused on Torah, avodah, and, with time, the responsibilities of leadership.

Soon after their marriage, the couple moved to Gateshead, where Rav Gelley would join the group of select young talmidei chachamim that comprised the town’s Kollel. There too, he would go on to distinguish himself for his great hasmadah and deep understanding of the most complex and diverse topics in Shas.

While yet in his 30s, Rav Gelley was selected to serve as a Rosh Yeshivah in his alma mater of Sunderland, which had transformed into a yeshivah for a new generation of English-born bnei Torah. With his signature clarity and mastery, he implanted in his many talmidim a method of analyzing the Gemara as well as the works of the mefarshim, with a special emphasis on the commentaries of the Ketzos Hachoshen and Nesivos Hamishpat. Many accomplished marbitzei Torah in England and around the world still attribute their success in learning to the years spend in Rav Gelley’s shiur.

In the late 1980s, Rav Gelley was selected to serve as the Rav of the KAJ kehillah in Washington Heights, New York. The move was made while the community’s previous Rav, Harav Shimon Schwab, zt”l was still living but had begun to take a less active role in the rabbanus. Rav Schwab was among those involved in selecting Rav Gelley and was pleased to be leaving the kehillah in such worthy hands.

Although his own family background was rooted in the traditions of the customs of Hungarian Jewry, dominated by the approach of the Chasam Sofer, Rav Gelley enthusiastically adapted to and upheld the minhagim and approach of the unique kehillah which bases its traditions on those of community of Frankfort led by Harav Shimshon Raphael Hirsh, zt”l. In his public role, he adhered to all of KAJ’s hallowed customs, and with his strength of character, ensured that they would continue unaltered.

For over 25 years, Rav Gelley threw himself with total dedication to meeting the diverse needs of the full-service kehillah, acting as its leading posek not only for its members but for its large kashrus division. He was also charged with overseeing the kehillah’s chevra kaddishah, bikur cholim, and other divisions, as well as taking an active role as a trusted advisor and guide for its membership.

Perhaps more than in any other aspect of the rabbanus, Rav Gelley put tremendous efforts into his role as head of KAJ’s mosdos hachinuch, doing everything in his power to see that they should function on the highest level. For its baalei baatim as well, he was successful in instituting and reviving many shiurim and learning sedarim, seeing to it that limud haTorah should play a central role in the life of the kehillah.

Rav Gelley had been in failing health for nearly 10 years, and had been out of the public eye for some time. Four years ago, he moved to Lakewood where several of his children reside. On Thursday afternoon a brief kavod acharon was held at Beth Medrash Govoha. A levayah was scheduled to take place on Friday morning at KAJ in Washington Heights, followed by kevurah at King Solomon Memorial Park in Clifton, New Jersey.

Rav Gelley is survived by, tbl”c, his Rebbetzin as well as by many children, grandchildren, and great-grandchildren.