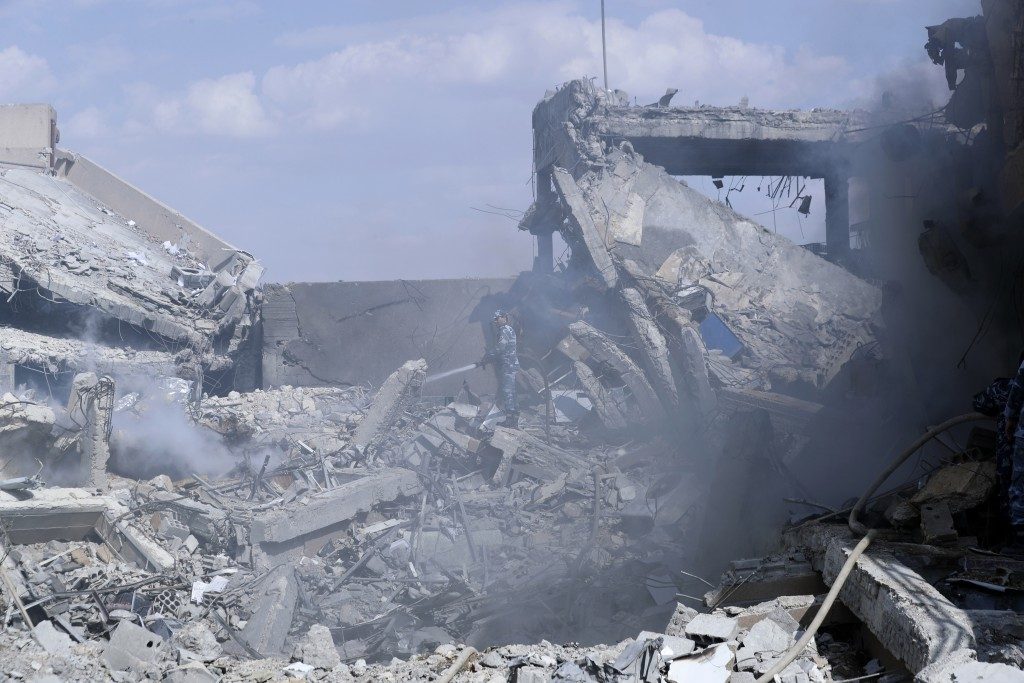 In 2013, after Syrian dictator Bashar Assad crossed President Obama’s red line and used chemical weapons on innocent civilians, a U.S. official told the Los Angeles Times that Pres. Obama’s retaliatory strike would likely be “just muscular enough not to get mocked” but not so devastating that it would elicit a response from Iran and Russia. In the end, Obama backed away from even such a small, feckless strike.

On Friday, Pres. Trump carried one out.

Pres. Trump deserves credit for acting (now twice) when Pres. Obama wouldn’t. He also deserves credit for getting U.S. allies to join us when Pres. Obama couldn’t. But let’s be clear: Friday night’s strikes were “just muscular enough not to get mocked.” As a result, they did more damage to the United States’ credibility on the world stage than they did to the Assad regime.

The U.S.-led strike did not hit a single airplane, airfield or delivery system, and it left Syria with chemical weapons capabilities. Even at the sites we did hit, the Syrians had plenty of time to move equipment and chemical stockpiles. There were no reported casualties on the ground, suggesting that the regime had evacuated the targets.

The Syrians know that they won. The Washington Post reports that “on the streets of Damascus, there was jubilation as government supporters realized that a more expansive assault would not materialize.” Retired Gen. Jack Keane, former vice chief of staff of the Army, said the Syrians had good reason to celebrate. “The response is very weak in my judgment,” he said. “It should have been decisive, it should have been consequential,” he continued.

Keane said Pres. Assad made a bet with his chemical attack and won. As Keane explained, Assad wanted to take out one of the last remaining rebel strongholds in the Damascus suburb of eastern Ghouta, which was holding out despite a brutal, nonstop bombing campaign by the Russians. Assad calculated that he could use chemical weapons to crush the resistance, achieve a military victory and then absorb what he expected to be a limited U.S. strike. So, he launched his chemical strike. Hours later, the rebels capitulated. And just as Assad predicted, the U.S. response was limited — leaving his air power, his command-and-control, and his chemical weapons capability largely intact. Assad was not punished. Quite the opposite — his attack played out just as he had hoped and predicted. Mission accomplished.

Far from being chastened, the U.S. response will embolden Assad, Russia and Iran. And it will embolden other U.S. adversaries as well.

What lesson did North Korea likely take from Pres. Trump’s weak actions in Syria? That the Trump administration is easily intimidated and risk-averse. The reason we didn’t take out all of Assad’s chemical weapons capability is that we were intimidated by Russia. Instead of warning the Russians to evacuate, and telling them we would not be responsible for what happened to their personnel if they failed to do so, we specifically designed our strikes to avoid even the remote possibility of provoking Moscow.

North Korean leader Kim Jong Un understands this. And the lesson he takes is that if Pres. Trump won’t take out Syrian airfields because we’re afraid of Russia’s response, then he’s definitely not going to strike Kim’s nuclear and ballistic missile program and risk a North Korean artillery barrage on Seoul.

This is a major setback to the Trump administration’s efforts to stop North Korea from developing the capability to threaten U.S. cities with nuclear missiles. The only way the United States can persuade North Korea to peacefully give up its pursuit of these weapons is if Kim believes Pres. Trump’s threat of military force is credible. After Friday’s U.S. actions in Syria, our credibility has been weakened, not enhanced.

News reports indicate that Pres. Trump wanted a more robust response but faced resistance from Defense Secretary Jim Mattis, the same man who has resisted giving Trump robust military options for North Korea. If accurate, Mattis did the president a great disservice by scaling down his desired Syrian response. The president’s desire is to project strength on the world stage. Under Mattis’ apparent guidance, he did the opposite.

As a result, Pres. Trump is weakened going into his summit with Kim. If Pres. Trump had taken no action, it would have been worse — but not by much. Because when you carry out strikes “just muscular enough not to get mocked,” you are projecting weakness — and weakness is provocative. (The Washington Post)