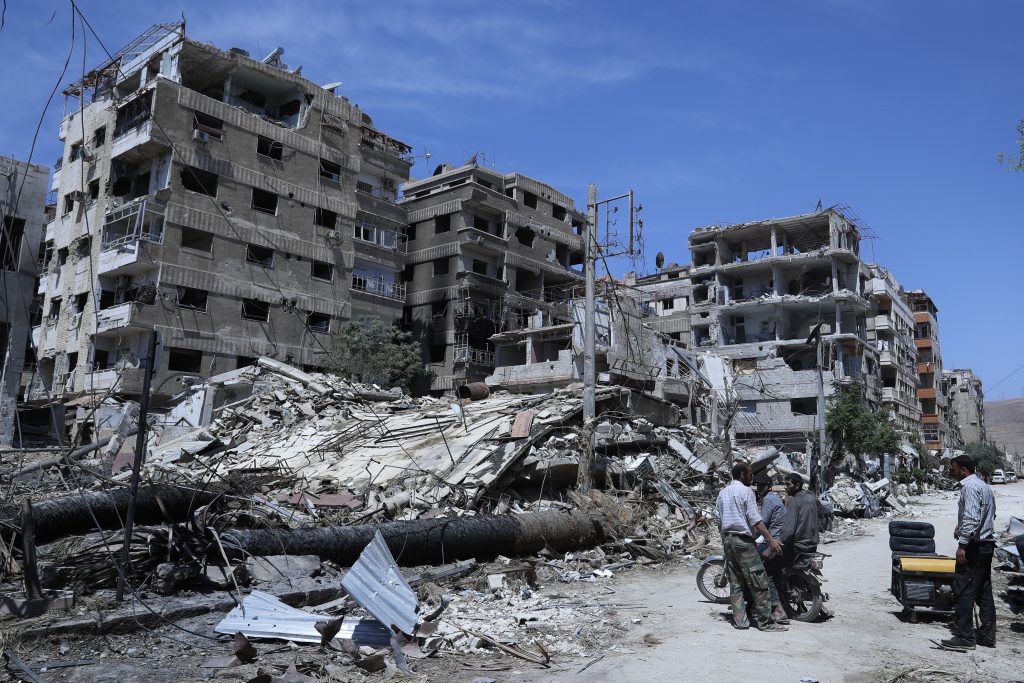 Chemical-weapons inspectors in Syria said Monday that they suspected that the site of an alleged chemical attack had been tampered with, while pro-government media broadcast interviews with doctors from the area saying that no such assault had occurred and that the victims they treated were suffering from asthma.

A team with the Organization for the Prohibition of Chemical Weapons arrived in Damascus on Saturday at the invitation of the government, to investigate the alleged chemical attack. The attack prompted U.S.-led strikes against Syrian chemical-weapons facilities over the weekend.

Two days later, the fact-finding team said it has still not been granted permission by Syrian authorities to visit Douma, the town in the Eastern Ghouta suburbs of Damascus where the attack is said to have taken place.

The U.S. ambassador to the OPCW, Kenneth Ward, said that there were suspicions that Russia, a long-time ally of the Syrian government, may have tampered with the evidence.

“It is our understanding the Russians may have visited the attack site. We are concerned they may have tampered with it, with the intent of thwarting the efforts of the OPCW Fact-Finding Mission to conduct an effective investigation,” Ward said, in comments at a closed-door meeting of the OPCW in The Hague that were later made public.

“Unfettered access essential. Russia & Syria must cooperate,” tweeted the account of the British team with the OPCW, expressing concern that access to Douma was being denied.

According to OPCW Director General Ahmet Uzumcu, Syrian and Russian officials have cited “security issues” for the refusal to allow the team to visit the town. Instead, he said, the team members have been told that they can interview 22 witnesses who will be brought to Damascus by the authorities.

The suspicions of tampering heightened concerns that the truth about the April 7 attack may never be known. The rebels who had controlled Douma for six years surrendered the day after the alleged incident, which left dozens of men, women and children dead in an apartment building, with foam coming out of their mouths, according to video footage.

Russian and Syrian troops have since deployed in the area, which the Syrian army declared fully under government control on Sunday. Videos broadcasted by Russian and Syrian media last week showed Russian troops visiting the building where the footage was filmed, and Russian Foreign Minister Sergei Lavrov told reporters that they had found no evidence of a chemical attack there.

Witnesses, survivors and medical workers have told journalists that scores of people were treated for breathing difficulties that night and that the victims emitted a strong smell of chlorine, which has been widely used in the past as a weapon of war.

In interviews broadcast by the pro-government Al-Ikhbaria channel, 13 medical workers, including nine doctors, said that the symptoms they treated suggested that the patients were suffering from asthma, not from the effects of a poison gas.