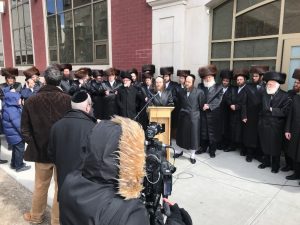 Many yeshivah parents and educators gratefully welcomed a change to the New York education laws, championed by Senator Simcha Felder, which advocates hope will afford the Orthodox community’s institutions legal protection against recent attacks on yeshivah curriculums. Yet, anticipating that public attacks by an organization that has been the impetus behind increased scrutiny on yeshivah education and their allies would not subside, a group of parents in Williamsburg banded together to proclaim that they intend to counter what they see as a biased assault on their way of life.

The result was a press conference held on the last day of Chol Hamoed Pesach, Thursday, April 5, in front of one of the many branches of Bais Rochel of Satmar Girls School in Williamsburg.

“I — and thousands of others — have made a choice to give our children a pure Torah chinuch like our fathers and grandfathers chose for their children, and it is something that we should be proud of,” Ari Greenberg, one of the parents involved in organizing the event, told Hamodia. “It’s hurtful to hear that our children are ‘illiterate,’ and it is time to fight back against the lies and negativity being given to the public about our community.”

Mr. Greenberg, a web designer and manager of a workforce development program for the United Jewish Organizations (UJO), said that the idea for the conference began as a conversation he had with a group of friends a couple of weeks before Pesach. The outcome was an agreement that concerned yeshivah parents need a more effective forum to voice their position in support of the mosdos to which they send their children.

The press conference was attended by several dozen like-minded parents, along with members of the media.

“We have made the choice to send our children to yeshivos, and we value the education they receive. We refuse to be intimidated by a small group of graduates who want to deny us that right. Enough is enough. This misinformation campaign must stop once and for all,” Levi Oberland, a licensed social worker, yeshivah graduate and parent said at the event.

“For nearly two years, we have watched a small group of disgruntled ex-students wage a public campaign of misinformation about yeshivos. They claim that the education [they] provide is inferior to that of public schools, and that our students are unprepared for success. These claims are outrageous.”

UJO President Rabbi David Niederman, a member of the executive committee of Parents for Educational and Religious Liberty in Schools (PEARLS) — who has been involved in efforts to combat attacks against yeshivos for some time — was involved in helping to organize the conference. He has penned editorials that appeared in multiple publications explaining his position on the issue, and says it is important that pro-yeshivah voices be given equal footing with opponents who have garnered wide media attention.

“The attacks on the yeshivos and on our whole way of life have continued to intensify, and, understandably, people are upset about it,” he told Hamodia. “This was the beginning of doing more to give those parents a voice on the stage of public opinion to say that we are ready to fight their campaign of misinformation… America is a country built on religious freedom and it is our right to stand up for a parent’s right to choose a Torah education which we should all be proud of.”

This article appeared in print on page 41 of the April 11th, 2018 edition of Hamodia.