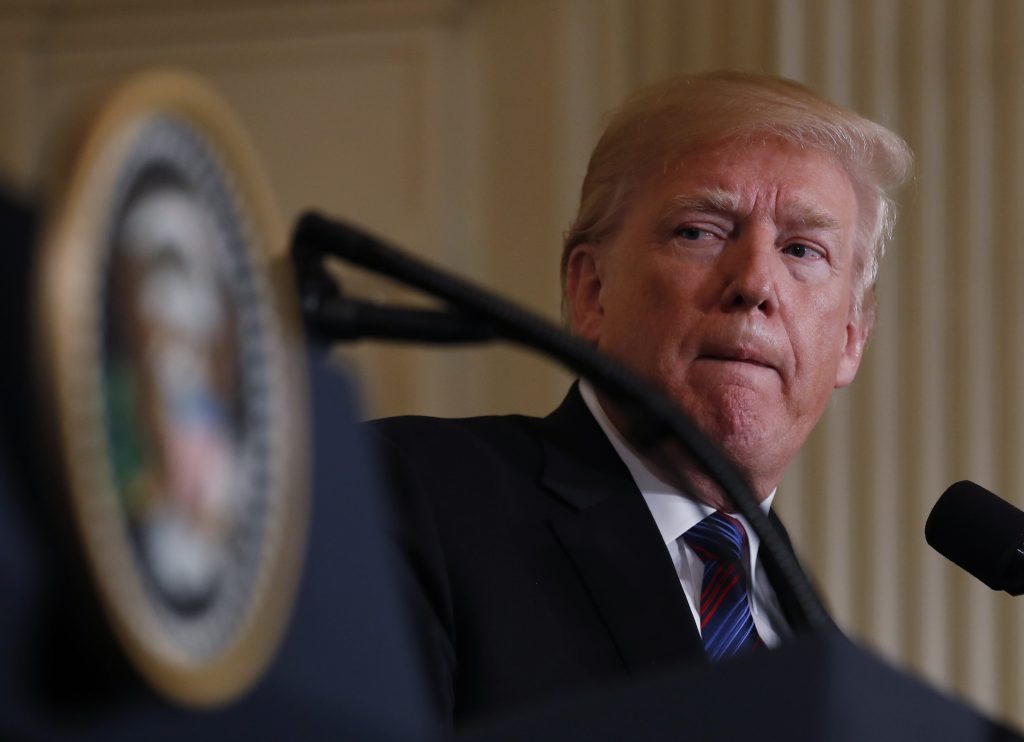 Special counsel Robert Mueller’s team of prosecutors has informed President Donald Trump’s attorneys that the president is not currently considered a criminal target in the Russia investigation, according to a person familiar with the conversation.

The person, who was not authorized to speak publicly about private conversations and spoke on condition of anonymity, told The Associated Press on Wednesday that the president is considered a subject of Mueller’s probe — not a target. A subject is typically someone whose conduct is of interest to investigators but prosecutors are not certain they’ve gathered enough evidence to bring charges.

The designation could change at any time, though. The development was first reported Tuesday by The Washington Post.

Trump’s designation as a subject came up as prosecutors and the president’s legal team negotiate the terms of an interview with him. The president has said he wants to speak with Mueller’s team, but his lawyers have not publicly committed to allowing him to be questioned.

On Wednesday, White House press secretary Sarah Huckabee Sanders declined to say whether the president remains willing to be questioned. In response to a question about the president being a subject, not a target, of the investigation, Sanders reiterated the president’s claim that his campaign didn’t collude with Russia during the 2016 presidential campaign.

“We know what we did and what we didn’t do, so none of this comes as much of a surprise,” Sanders said. She referred further questions to Trump’s attorneys.

Trump attorney Jay Sekulow declined to confirm or discuss the conversations with Mueller, saying: “We do not discuss real or alleged conversations between our legal team and the Office of Special Counsel.” White House lawyer Ty Cobb declined to comment.

The Justice Department typically treats people involved in investigations as witnesses, subjects or targets. Mueller’s determination that Trump is a subject suggests he’s more pivotal to the investigation than a mere witness, a designation for someone who has observed events of interest to agents and prosecutors.

Although targets tend to be people the government is gathering evidence against with the goal of prosecuting, subjects have a much looser, broader definition.

“A subject means we’re still looking at you,” McCarthy said. “You’re a person of interest in this investigation.”

Still, the import of the designation wasn’t immediately clear. It is not known, for instance, if Mueller’s office has concluded that, at the moment, there is insufficient evidence to consider Trump a target. It is also possible that prosecutors agree they are bound by a Justice Department legal opinion that contends that a sitting president cannot be indicted.

A grand jury is the way indictments are issued. Yet the White House witnesses with the most direct information about Trump’s actions in the White House have spoken privately with Mueller’s team instead of being summoned before the grand jury, a possible indication that their statements are being used for the purposes of assembling a report rather than pursuing criminal charges.

Mueller’s team has signaled that they’re interested in discussing several key episodes in the early parts of the Trump administration as they probe possible obstruction of justice.

Investigators want to discuss conversations Trump had with Comey in which the former FBI director has said the president encouraged him to end an active investigation into Flynn. They’re also interested in the events leading up to Flynn’s February 2017 firing.

Investigators have said they want to hear from the president to understand his intent and thinking during those events.