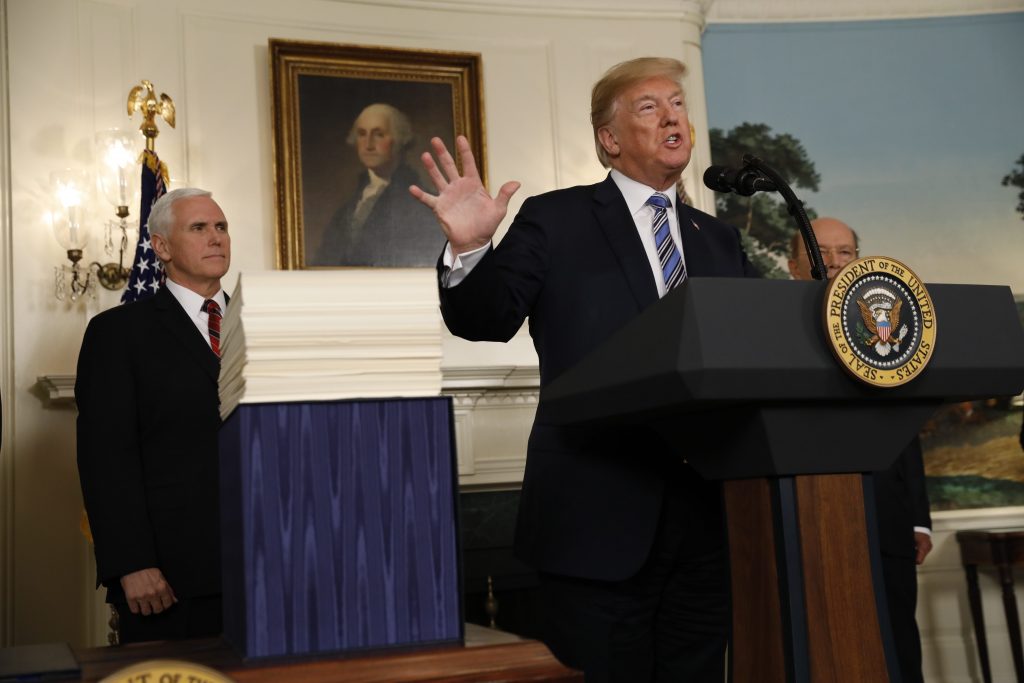 President Donald Trump signed Congress’ newly passed $1.3 trillion spending bill on Friday, ending suspense over a surprising threat he made hours earlier on Twitter to veto the budget and shut down the federal government.

Initially, it had been a foregone conclusion that Trump would sign the bill ahead of a midnight deadline to keep the government running.

Trump used the threat to draw attention to his displeasure about immigration issues, although he said the bill would boost funding to the military, one of his top priorities.

“There are a lot of things I’m unhappy about in this bill,” he told reporters, patting the more than 2,000 pages of the bill stacked beside him in the Diplomatic Reception Room of the White House.

“I will never sign another bill like this again,” he said. “Nobody read it. It’s only hours old.”

The veto threat had caught Trump’s own aides by surprise, as well as lawmakers in the Republican-controlled Senate and House of Representatives, who had already left Washington for a scheduled two-week spring recess. Trump himself was scheduled on Friday to fly to Florida for a weekend at his private resort.

It was unclear how seriously Republican leaders took Trump’s shutdown threat, and neither Speaker Paul Ryan nor Senate Leader Mitch McConnell commented publicly on it.

Trump has been frustrated that Congress has not turned over funding to make good on his campaign promise to build a wall along the U.S.-Mexico border. The bill includes $1.6 billion for six month’s of work on the project, but he had sought $25 billion for it.

Trump also has been at odds with Democrats in Congress over the fate of Dreamer immigrants – those brought to the United States illegally when they were children.

Trump canceled the Deferred Action for Childhood Arrivals (DACA) program that gives work permits to the Dreamers and protects them from deportation. The decision is currently tied up in court cases.

He offered to extend the protections, tied to a sweeping set of changes to immigration laws, but subsequently rejected bipartisan offers from lawmakers.

As the six-month spending deal was coming together, there had been reports that Trump had balked at the deal and had to be persuaded by Ryan to support it.

The conservative wing of Trump’s party had panned the bill because of its spending increases, and some deficit hawks cheered Trump’s threat to veto it.

Included in the bill is the Taylor Force Act, which sharply reduces U.S. aid to the Palestinian Authority until it stops making payments to families of those who commit terror attacks on Israelis. The legislation is named for a former U.S. service member who was killed in a terror attack while visiting Israel in 2016.

Sen. Lindsey Graham, (R-S.C.), who introduced the Taylor Force Act in the Senate, called the Act “one of the most significant pieces of legislation I’ve been involved with.”

Graham, who represents the state that is home to Force’s parents, said that passage of the Taylor Force Act gives the U.S. “much-needed leverage with the Palestinians to push back on this outrageous policy.”

“The Taylor Force Act will, G-d willing, save innocent lives in Israel,” said Nathan Diament, Executive Director at the Advocacy Center of the Orthodox Union, which has long championed the Act.

Rabbi Abba Cohen, Agudath Israel’s Washington Director, said that the Act “is a tangible expression that when the U.S. says it will fight terrorism, it means what it says. Supporting terrorism, or those who commit acts of violence against innocents, is not to be tolerated. Period.”