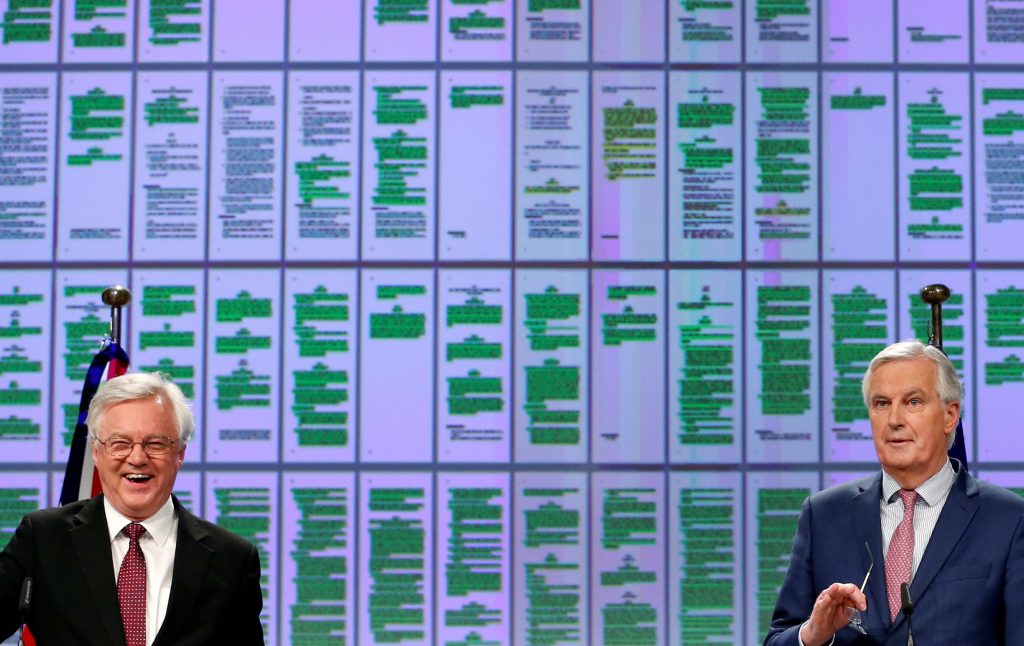 Britain agreed to a potentially unpalatable deal to avoid a “hard border” for Northern Ireland on Monday to win agreement from the European Union that it would retain most EU benefits for nearly two years after Brexit.

After a weekend of intensive talks under the shadow of Irish fears of “backsliding” by London on a “backstop” accord that Prime Minister Theresa May had rejected, the two sides issued a new, 129-page draft treaty that was awash with green highlighter denoting final agreement on large areas of the legal text.

Michel Barnier, the EU’s chief negotiator, told a news conference with Brexit Secretary David Davis that none of this is legally binding until a whole treaty is ratified before Brexit a year from now. However, he described the agreements as a “decisive” moment for efforts to avoid Britain crashing out without a deal.

“A decisive step remains a step; we are not at the end of the road and there still remains a lot of work to be done, including on Ireland and Northern Ireland,” Barnier cautioned.

May has described as unacceptable any possible deal that cuts Northern Ireland off from the rest of the United Kingdom by leaving the British-ruled province subject to EU rules after Brexit. Any such deal, even if only a fallback should no other solution be found, is likely to be unpalatable to London and pro-British Unionists in the province.

Davis said the transition agreement and a deal on rights for expatriate citizens would give considerable certainty to individuals and companies affected by Brexit on March 29, 2019.

May’s prime goal has been to secure the political accord that will now leave Britain essentially a non-voting EU member until the end of 2020 to ease concerns for business. That accord is now likely to be endorsed by leaders of the other 27 EU member states at a summit on Friday, a day after they have met May herself in Brussels.

Ireland, which had been threatening to hold back a transition deal if it was not satisfied with British assurances on the Northern Irish border, was comfortable now that it had those assurances and full backing in the EU to hold London to account.

Financial markets welcomed the deal. The pound rose as much as 1 percent against the dollar to $1.4088, its strongest since Feb. 16. Versus the euro, sterling rose 0.8 percent to 87.46 pence per euro. British government bond prices fell and the yield on the two-year gilt hit 0.863 percent, the highest since Britain voted to leave the EU in June 2016.

The biggest stumbling block has been May’s rejection of the original draft language on Ireland issued by the EU three weeks ago. It said that if Britain and the EU did not find any better way to avoid customs barriers and other mechanisms likely to renew tensions in Northern Ireland, then the province should follow EU economic rules even if the rest of the U.K. did not.

May, who depends on Northern Irish votes for her slender parliamentary majority, said no British prime minister could ever agree to such an isolation of the province from the mainland. Dublin, however, had warned that it could not agree to endorsing the transition deal if London went back on what the EU says was its agreement in December to this worst-case scenario.

Britain argues that it has two other preferred outcomes for the Irish border, both dependent on agreement on future EU-U.K. trade rules. Negotiations on that will not start until next month, once Friday’s EU summit gives Barnier the go-ahead.

The Irish protocol now appears in yellow in the draft text, indicating that, as Barnier said, Britain had accepted all the EU’s principles but wanted to discuss the operational issues.

So while “the” backstop text put forward by the EU would not survive, “a” backstop would be contained in the treaty.

“With respect to the draft protocol on Ireland/Northern Ireland, the negotiators agree that a legally operative version of the ‘backstop’ solution for the border… should be agreed as part of the legal text of the Withdrawal Agreement, to apply unless and until another solution is found,” a preamble to the draft text issued on Monday said.

One EU diplomat involved in negotiations summed up the move and on the wide spread of other agreements reached as saying May had given priority to the transition period: “The Brits have just given in on everything, so big was their drive to get the transition. On citizens’ rights, on many other elements.”

Among other issues outstanding on a text that both sides hope can be agreed by October to be ratified before March are how the judicial processes to enforce the accord will work. London is resisting EU demands for a final say for EU courts.