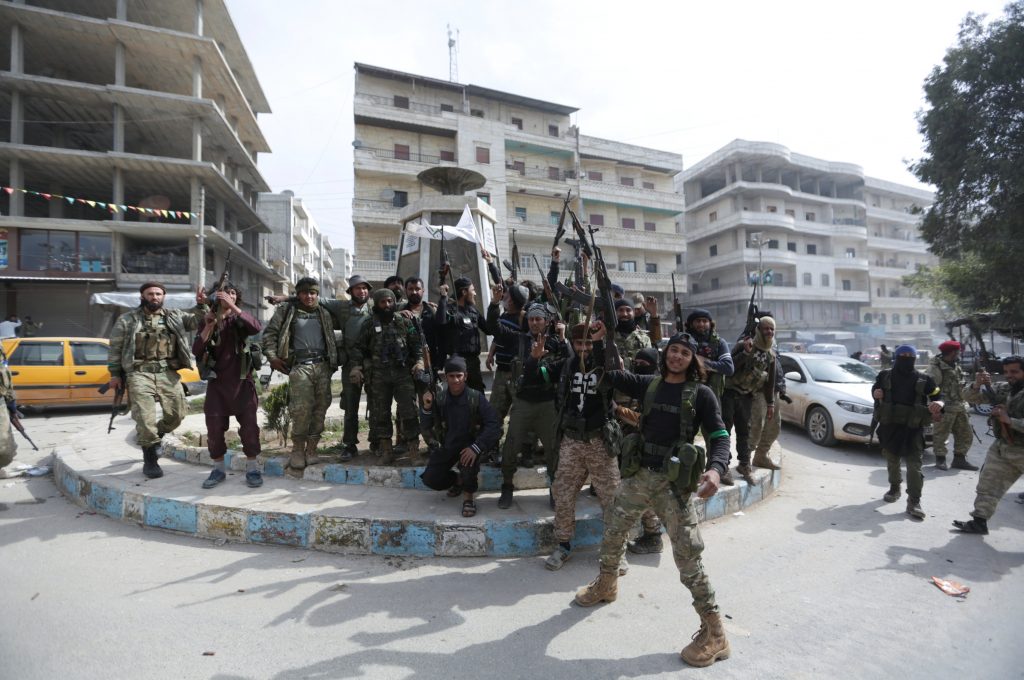 Turkish military and allied Syrian forces marched into the center of the northern Syrian town of Afrin Sunday, raising their flags and shooting in the air in celebration nearly two months after launching their offensive on the Kurdish enclave. The advancing troops faced little resistance from the Kurdish militia that retreated and vowed to turn to guerrilla tactics.

“Many of the terrorists had turned tail and run away already,” Erdogan said in a speech in western Turkey. “In Afrin’s center, it is no longer the rags of the terror organization that are waving but rather the symbols of peace and security.”

The Kurdish militia called the assault on Afrin an “occupation” and vowed a “new phase” of guerrilla tactics against Turkish troops and its allied Syrian fighters.

It is not clear what Turkey would do after the capture of Afrin. Turkey views the Kurdish forces in the Afrin enclave along the border as terrorists linked to the outlawed Kurdistan Workers’ Party, or PKK, which has waged a decades-long insurgency within Turkey’s borders.

Erdogan has repeatedly said that Turkey will not allow a “terror corridor” along its border and has vowed to push east after Afrin. Erdogan threatened to move to Manbij, a Kurdish-run town to the east where U.S. troops have also maintained a presence after it was cleared of Islamic State terrorists in 2016.

Washington’s support to the YPG, including arming the militia and relying on it to battle Islamic State terrorists in eastern Syria, has strained relations between Turkey and the U.S. A push east could further inflame tension.

In an attempt to prevent such a move east, Washington began discussions to address Turkey’s concerns about the Kurdish militia’s presence in Manbij. Turkey wants the YPG to pull out from the town.

Meanwhile, U.S. and Kurdish officials said Turkey’s fight with the YPG has distracted from fighting IS. A Kurdish official Sunday said the fight against IS in northeastern Deir el-Zour province, where remnants of IS have remained, have been put on hold as the battle for Afrin unfolded.

On Sunday, Kurdish officials said they had evacuated Afrin of civilians. Footage of long lines of vehicles leaving the town was aired on Syrian state-run media. Fewer residents got out on foot or on motorcycles heading to government-controlled areas nearby.

Later Sunday, limited fighting was reported in some pockets in Afrin town while the Turkish military said it was combing the area for land mines and explosives.

In a press conference outside of Afrin, Kurdish official Othman Sheik Issa said a new phase of the fight will begin against Turkey, threatening “hit and run tactics” to target Turkish troops and its allied forces. He said YPG fighters remain deployed in areas of Afrin.

“Our forces in all parts of Afrin will turn into a continuous nightmare for them,” Issa said. “The resistance will continue in Afrin until it is all liberated and it goes back to its rightful owners.”

Ankara launched the operation, codenamed Olive Branch, against the town and surrounding areas on Jan. 20, slowly squeezing the militia and hundreds of thousands of civilians into the town center. Forty-six Turkish soldiers have been killed since then.

Another Dogan video showed a Syrian fighter shooting at a Kurdish statue, before a bulldozer pulls it down.

Turkish government spokesman Bekir Bozdag tweeted that Turkey would take steps to restore daily life and ensure access to food and health care. “Our job is not done yet, we have a lot more work. But terror and terrorists in Afrin are over,” he said.

The army posted a video on social media showing a soldier holding a Turkish flag and a man waving the Syrian opposition flag on the balcony of the district parliament building with a tank stationed on the street. The soldier called the capture a “gift” to the Turkish nation and to fallen soldiers on the anniversary of a famous World War I victory.

Turkey is marking the 103rd anniversary of the battle of Gallipoli, where the Ottoman Empire repelled an invasion by Allied forces after several months of heavy fighting.

Afrin appeared largely empty. Salih Muslim, a senior Kurdish official living in exile in Europe, tweeted that Kurdish fighters had withdrawn from the town but that they will continue their fight.

Azad Mohamed, a resident of Afrin who fled the fighting, said he spent two days on the road until he reached relatives in eastern Syria. “It was collective displacement. There was an endless line along the road,” he said. He said there were still armed fighters when he left the town who had vowed to keep up the fight.

Mohamed said he worried he will not be able to return home.

The Britain-based Syrian Observatory for Human Rights said nearly 200,000 people have fled the Afrin region in recent days amid heavy airstrikes, entering Syrian government-held territory nearby. Erdogan has said the people of Afrin will return.

Turkey launched an earlier cross-border operation in 2016 to clear an area in northern Syria of IS and the YPG, preventing the Kurdish group from linking Afrin with the much larger territories it holds to the east.

Turkey also fears the establishment of a Kurdish self-ruled zone in Syria that could inspire its own Kurdish minority to press for greater autonomy. A peace process with the PKK collapsed in 2015, reigniting a conflict that has killed tens of thousands over more than three decades.

The Kurds are the largest stateless ethnic group in the Middle East, with some 30 million living in an area split between Iran, Iraq, Turkey and Syria.