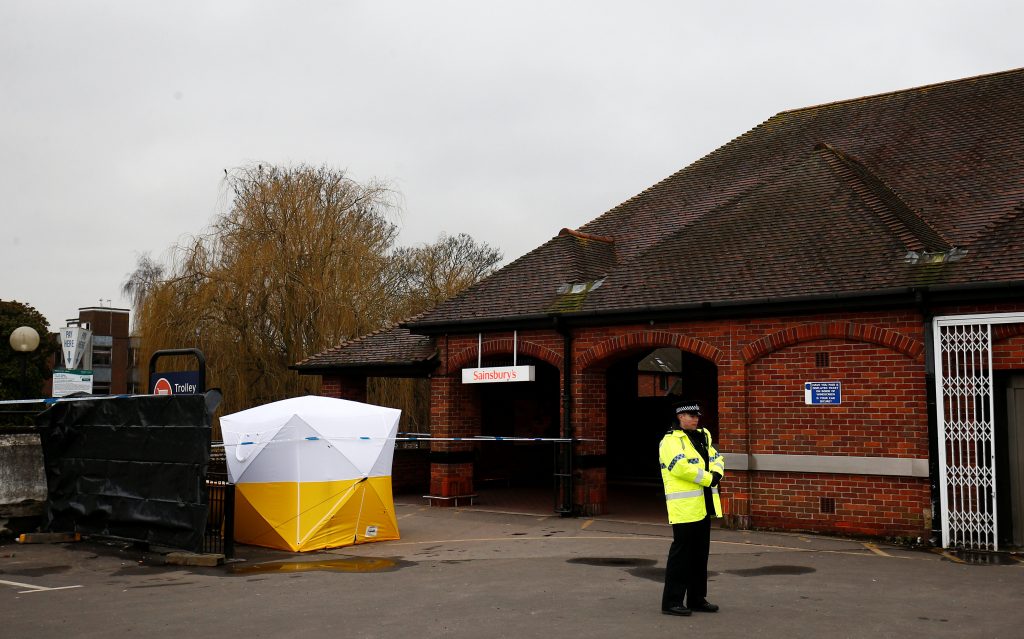 President Vladimir Putin faces a midnight deadline to explain to Britain how a nerve agent developed by the Soviet Union was used to strike down a former Russian double agent who passed secrets to British intelligence.

Sergei Skripal, 66, and his daughter Yulia, 33, have been in hospital in a critical condition since March 4 when they were found unconscious on a bench outside a shopping centre in the southern English cathedral city of Salisbury.

Prime Minister Theresa May said it was “highly likely” Moscow was to blame after Britain identified the substance as part of the Novichok group of nerve agents which were developed by the Soviet military during the 1970s and 1980s.

“It is now clear that Mr. Skripal and his daughter were poisoned with a military-grade nerve agent of a type developed by Russia,” PM May said. “Either this was a direct act by the Russian state against our country. Or the Russian government lost control of this potentially catastrophically damaging nerve agent and allowed it to get into the hands of others.”

PM May gave Putin, who faces a presidential election on March 18, until the end of Tuesday to explain what happened, or face what she said were “much more extensive” measures against the $1.5 trillion Russian economy.

The Russian ambassador, Alexander Yakovenko, was summoned to the Foreign Office and given until the end of Tuesday to provide an explanation. Russia has denied any role in the attack on Skripal and his daughter.

U.S. Secretary of State Rex Tillerson said the United States had “full confidence” in Britain’s assessment that Russia was likely responsible. President Donald Trump has not yet publicly commented on the attack.

The EU also said it would stand by Britain, which is due to leave the bloc in just over a year’s time. PM May spoke to French President Emmanuel Macron, who Downing Street said condemned the attack and offered his solidarity with Britain.

NATO Secretary General Jens Stoltenberg said the use of any nerve agent was horrendous and completely unacceptable.

“It is a circus show in the British Parliament,” the TASS news agency quoted Russian Foreign Ministry spokeswoman Maria Zakharova as saying. “The conclusion is obvious: It’s another political information campaign, based on a provocation.”

Prime Minister May said Russia had shown a pattern of aggression including the annexation of Crimea and the murder of former KGB agent Alexander Litvinenko, who died in 2006 after drinking green tea laced with radioactive polonium-210.

A British public inquiry found the killing of Litvinenko had probably been approved by Putin and carried out by two Russians, Dmitry Kovtun and Andrei Lugovoy – a former KGB bodyguard who later became a member of the Russian parliament.

Both denied responsibility, as did Moscow.

Putin, who took over as Kremlin chief from Boris Yeltsin on the last day of 1999, has denied allegations that Russia meddled in the 2016 U.S. presidential election and says the West has repeatedly tried to undermine Russian interests.

Skripal betrayed dozens of Russian agents to British intelligence before his arrest in Moscow in 2004. He was sentenced to 13 years in prison in 2006, and in 2010 was given refuge in Britain after being exchanged for Russian spies.

Since emerging from the John le Carre world of high espionage and betrayal, Skripal lived modestly in Salisbury and kept out of the spotlight until he was found unconscious on Sunday.

Novichok agents are believed to be five to 10 times more lethal than the more commonly known VX and Sarin. They cause a slowing of the heart and restriction of the airways, leading to death by asphyxiation, University of Reading pharmacology professor Gary Stephens said.

Russian state media said Skripal had been recruited by the British when working as Russia’s military attache in Spain and that he had handed over 20,000 pages of secret documents to MI6, Britain’s foreign spy service.

A British policeman who was one of the first to attend to the stricken spy was also affected by the nerve agent. He is now conscious in a serious but stable condition, police said.