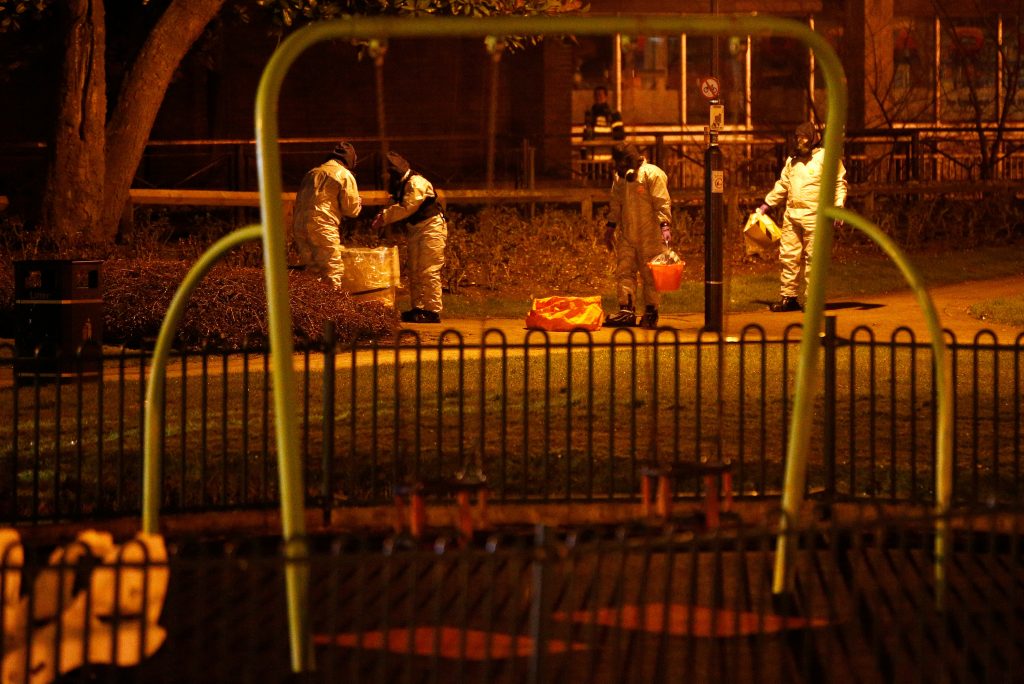 President Donald Trump and British Prime Minister Theresa May agreed on Tuesday that Russia must provide “unambiguous answers” after London gave Moscow until midnight to explain how a Soviet-era nerve weapon was used against a former Russian double agent.

PM May, who said on Monday it was “highly likely” that Russia was behind the poisoning of Sergei Skripal and his daughter, also won support from Britain’s main European allies and the European Union, which denounced the attack as “shocking” and offered help to track down those responsible.

Jens Stoltenberg, Secretary-General of the U.S.-led NATO alliance, said the attack was “horrendous”.

Russia, however, signaled there was little likelihood that it would respond adequately to London’s call for a credible explanation by Wednesday.

Denying it had played any part in the attack, which left the 66-year-old Skripal and his 33-year-old daughter Yulia fighting for their lives, Russia said it would ignore the ultimatum until London handed over samples of the nerve agent used and complied with international obligations for joint investigations of such incidents.

“Any threats to take ‘sanctions’ against Russia will not be left without a response,” the Russian foreign ministry said in a statement. “The British side should understand that.”

Russia holds a presidential election on Sunday in which Vladimir Putin, himself a former KGB spy, is expected to coast to a fourth term in the Kremlin.

Skripal, a former officer with Russian military intelligence, betrayed dozens of Russian agents to British intelligence before being arrested in Moscow and jailed in 2006.

He was released under a spy swap deal in 2010 and took refuge in Britain, where he had been living quietly in the cathedral city of Salisbury until he and his daughter were found unconscious on a public bench there on March 4.

A British policeman who was also affected by the nerve agent is now conscious, in a serious but stable condition.

PM May said on Monday that Britain had identified the substance as belonging to the lethal Novichok group of nerve agents developed by the Soviet military in the 1970s and 1980s.

She and her ministers say Britain will take further “robust” punitive action against Russian interests – beyond sanctions already in place – if Pres. Putin does not come up with a credible explanation of events.

Pres. Trump’s endorsement of Britain’s tough line, made during a phone call with May, came on the heels of messages of solidarity from France’s President Emmanuel Macron and German Chancellor Angela Merkel. They gave the British prime minister additional hope of marshalling Western backing for her government as it heads towards a showdown with Pres. Putin.

“President Trump agreed with Prime Minister May that the Government of the Russian Federation must provide unambiguous answers regarding how this chemical weapon, developed in Russia, came to be used in the United Kingdom,” the White House said in a statement about the two leaders’ phone call.

“The two leaders agreed on the need for consequences for those who use these heinous weapons in flagrant violation of international norms,” it said.

PM May’s spokesman said Pres. Trump had said the United States was “with the U.K. all the way”.

If no satisfactory Russian response is received by midnight London time, PM May is likely to outline Britain’s response in parliament on Wednesday.

It remains to be seen how much of a rupture in relations with Russia PM May’s government is prepared to envisage.

While trade figures show Russia accounts for less than 1 percent of British imports, London is of major importance for Russian companies seeking to raise capital and, since the 1991 collapse of the Soviet Union, has become the Western capital of choice for many Russian business leaders.

Britain could call on allies for a coordinated Western response, freeze the assets of Russian business leaders and officials, expel diplomats or launch targeted cyberattacks. It may also cut back participation in the World Cup which Russia is hosting in June and July.

Russia Today, a round-the-clock news network that is funded by Pres. Putin’s government, could lose its license to broadcast in Britain if PM May’s government determined that Moscow was behind the attack, Britain’s media regulator said.

This report drew a swift response from Russia. “Not a single British media outlet will work in our country if they shut down Russia Today (RT),” the state-run RIA news agency cited Maria Zakharova as saying on state media.

The expression of solidarity from the EU came despite tensions over British preparations to quit the bloc next year.

The EU has already imposed travel restrictions and asset freezes against 150 people and 38 companies in response to Russia’s annexation of Crimea from Ukraine. EU nationals and companies are also banned from buying or selling new bonds or equity in some state-owned Russian banks and major Russian energy companies.

But diplomats in Brussels said that, despite sharing Britain’s anger, the bloc was unlikely to have much stomach for imposing additional sanctions on Russia since attributing the nerve attack to Moscow was difficult and keeping existing economic sanctions going was proving a strain.